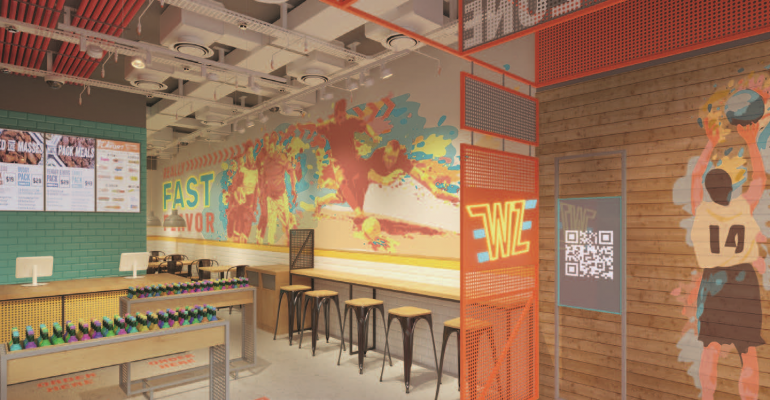 Instagram-able murals will invite guests to snap selfies, activating automatic filters that will add enhancements to the photos, like editing in a foam finger.
News>Fast Casual

Why wait for the big game? New Wing Zone design is for the everyday wings-and-sports fan

Eight months after being acquired by sandwich specialist Capriotti’s, the Wing Zone chain is being rebranded with a high-energy sports-themed design to capture a consumer who sees wings as an everyday meal, not just for the big game.

With a new logo featuring the tagline “Flavor Really Fast,” the new-and-improved Wing Zone will be designed for speed of service, with a streamlined menu and cubbies for grab-and-go pickup of online and delivery orders. The company has tweaked the cooking process with a pre-baking system that allows bone-in wings to be fried in 90 seconds and boneless in 50 seconds, for example.

The ultimate goal is to spark new development and improve sales volumes. The company has set sights on reaching 250 units by 2025, with an average unit volume of $1 million. Currently, Wing Zone has about 61 locations in five countries, with about 31 of those units in the U.S. The chain’s average unit volume is roughly $800,000.

With 38 franchised units in the pipeline across the U.S., Wing Zone will be more than doubling its domestic footprint very quickly. Another five corporate locations are planned for the Las Vegas area — where the new design and branding features will debut by early next year.

David Bloom, chief development and operating officer for Capriotti’s and Wing Zone, told NRN the wings space is crowded, but most brands position wings as party food or for sports gatherings.

“We still have the sports aspect, but it’s an everyday person having fun playing flag football and hanging out with friends, rather than the NFL,” said Bloom. “Wings are getting bigger as an everyday product, rather than just a party food.”

Though delivery will remain a big focus — and Bloom said there are more rebranding efforts coming to the online ordering experience — the new design raises the bar for the in-store experience.

“We want you to come in and pick up food,” he said.

For example, scent diffusers will be deployed to neutralize frying odors, giving guests a first impression that stimulates taste buds with scents of red pepper, citrus and even fresh grass — aromas that can have a very specific impact on consumer behavior.

“It’s very subtle, but it has a really positive impact on your perception,” said Bloom. “There are really interesting studies … that show if you pipe in basil and grass, salad sells. Or if you pipe in smoky scents or oak, it makes beef sell.”

Even the music has been aligned with the rebrand. The company has brought in an international DJ to develop playlists that match the desired energy level at the restaurants during different points in the day. There’s a playlist to energize workers during pre-shift set up, for example, and another for the close down.

That playlist will also be tied to the online ordering experience for guests to download, Bloom said.

The roughly 1,200-square-foot restaurants will have open kitchens and bottles of sauces will be prominently for sale.

Instagram-able murals will invite guests to snap selfies, activating automatic filters that will add enhancements to the photos, like editing in a foam finger. Uniforms will also evoke those from the sports world, and the vibrant color schemes are carried through to the takeout packaging.

Bloom said the company will apply any learnings from the new Wing Zone design to Capriotti’s down the road for a potential 3.0 variation for the fast-casual sandwich shop.

Wing Zone franchisees have already begun incorporating aspects of the new design into their stores, Bloom said. And there are more improvements to the back-of-the-house coming to further boost speed and efficiency.

“It’s like changing the tires on the bus while it’s moving at 95 miles per hour,” said Bloom.