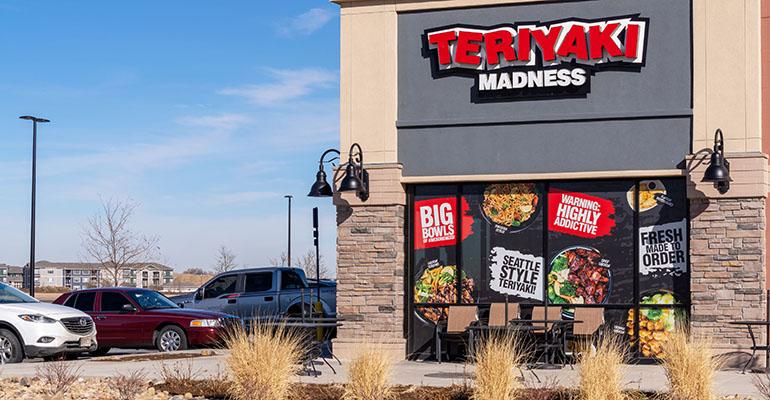 For an Asian-influenced concept like Teriyaki Madness, many of the supply chain woes come from trying to ship ingredients overseas. CEO Michael Haith said the brand had a lot of issues with distributors from China.
News>Fast Casual

When it comes to supply chain, there are no shortcuts for restaurants

Although the supply chain was a disaster during the peak of the pandemic for every retail and consumer goods industry, including foodservice, the challenges have not abetted in a post-COVID world; they’ve just evolved. Supply experts are quick to point out the issues that labor struggles and pricing surges have had on their companies, from not being able to get products on time or struggling to afford ingredients and packaging that they’ve never had an issue with purchasing in the past.

While operators might hold out hope for a secret hack to somehow get around supply chain shortages and pricing increases, experts say there is no shortcut when it comes to maintaining a stable supply chain. Success comes down to building solid relationships with your distributors and being flexible about where your ingredients come from or finding substitutions if necessary.

“I think at the start of 2022, we were thinking, ‘We’re finally going to feel some relief,’ because we were seeing prices decrease a bit even with inflation and there was some stabilization,” said Maryam Chaney, vice president of food and beverage at private equity firm Savory Fund, which owns and operates several emerging concepts. “But now there are other factors like staffing shortages and avian influenza that have caused people to shift from turkey and chicken and go to pork and beef, which has caused a new floor for beef pricing. … Supply chain issues were a perfect storm [in 2020] that became an earthquake and now we’re having a radioactive meltdown on top of that.” 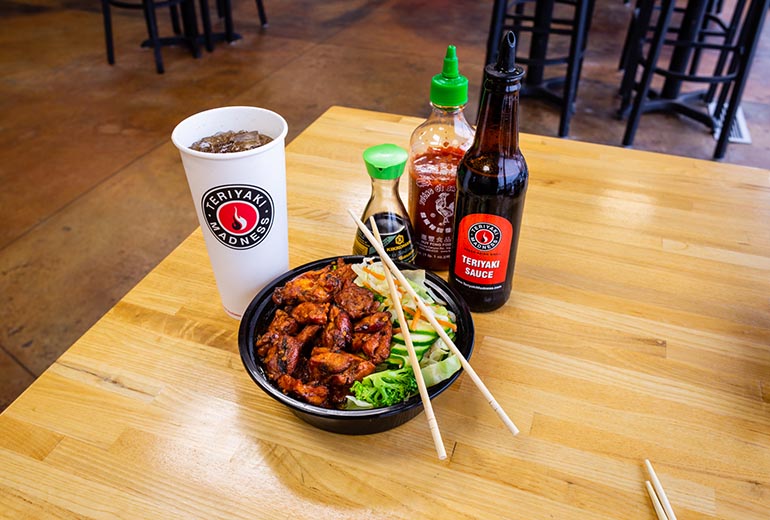 For an Asian-influenced concept like Teriyaki Madness, many of its supply chain woes come from trying to ship ingredients overseas.

The operators we spoke with consistently lamented the same supply chain issues over and over: astronomical pricing and issues with international shipping challenges. Whereas 2020 and 2021 were the years of scarcity and product shortages, now labor challenges and the trucking crisis have caused commodity costs to skyrocket. Almost all restaurant operators raised menu prices to keep up with commodity cost inflation. Denver-based Teriyaki Madness CEO Michael Haith said that his company raised prices like everyone else, but is being conscientious of margins, franchisee profitability needs, and what the consumer would actually be willing to pay.

“We really try and maintain the lowest cost possible to our customer, and I think they appreciate that,” Haith said. “But because we offer a fast-casual, high-quality product, they’re going to be willing to pay a little more and they also understand prices are going up everywhere. No one likes inflation, but we’re all weighing quality vs. value.”

For an Asian-influenced concept like Teriyaki Madness, many of its supply chain woes come from trying to ship ingredients overseas. A particularly thorny conundrum was the Sriracha sauce shortage, for which the company had to find a substitute. Haith also said that the brand has had a lot of issues with distributors from China.

“One of the most egregious examples was we had soy sauce being shipped over from China and it was stuck on a boat in Los Angeles Harbor,” Haith said. “They were actually putting it on planes and flying it in for us. … We’ve started to offshore or buy many of these ingredients domestically, and we’re willing to pay a little bit more in order to guarantee the consistency of supply.”

Teriyaki Madness is not the only company switching over to mostly domestic suppliers to avoid complications from overseas shipping. Smoothie King may not have to deal with poultry sourcing headaches, but fruits and vegetables can be challenging to source domestically. Smoothie King vice president of supply chain Barbara Mayrand said that the company has begun nearshoring ingredients (or shipping from a nearby country instead of far away) to ensure more consistent ingredient availability and pricing.

“A lot of our fruits and vegetables are brought in from outside of the country because some tropical fruits just aren't grown in the United States, like pineapple,” Mayrand said. “So, instead of having just one or two pineapple suppliers, we have five. … We were previously only buying pineapple out of Vietnam, Thailand and the Philippines, and now we got Costa Rica approved as an additional growing area. … With all of the ports backed up, you could have your pineapple sitting off the coast of California for four months in a freezer container.”

For Texas-based smoothie chain, Smoothie King, nearshoring goes hand in hand with diversification of suppliers. Many operators are trying to increase the number of distributors they have relationships with, because you never know when disaster will strike — from labor shortages to crop failures or a shipping boat sitting off the coast of Los Angeles. Panera Bread has a similar strategy.

“You have to have multiple supply partners to be able to innovate,” said Gregg Waterman, chief supply chain and manufacturing officer at Panera Bread. “We need to have ownership of that recipe and we intend to have secondary suppliers. That doesn’t mean they won’t be a partner of ours, but you have to establish [that you have multiple partners] early on so you’re not stuck. And if there’s an issue with one supplier you have another one to turn to. … Suppliers know that they’re not 100% predictable.”

When creating new menu items, Panera always consults and works closely with its food and beverage innovation team to make sure that they are introducing plentiful suppliers (and strong relationships) to create multiple backups for new ingredients. For example, when Panera introduced its new chicken sandwiches earlier this year, the company had multiple chicken suppliers that participated in the development process from the start.

“Previously, we may have just had one supplier that we partnered with from the beginning,” Waterman said. “It creates the spirit of a more competitive environment when distributors are involved in the creative process from the beginning.”

One of the downsides to working with multiple providers is ensuring consistency of quality no matter where you source your chicken or pineapple from. 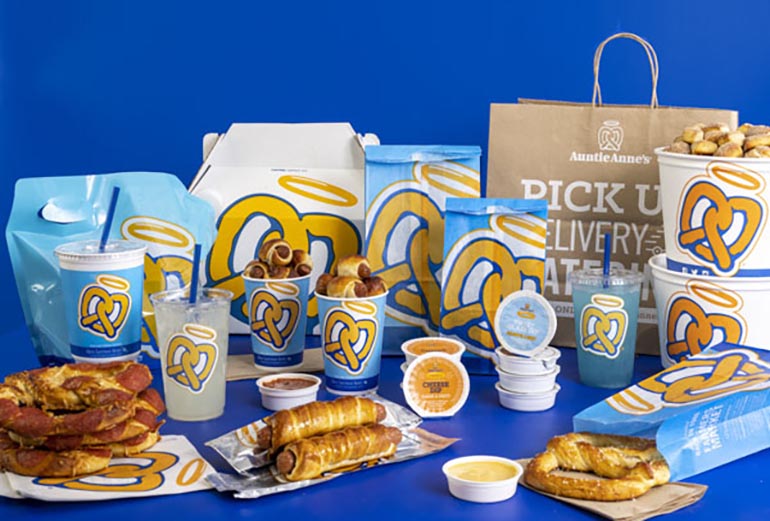 Focus Brands is in the midst of a multi-year plan to simplify its supply chain, and will work on decreasing its number of suppliers by 2025. The company is also working on a supplier score card to look at the relationship.

“We have a lot of single source dependency, and work to identify matches and find suppliers that can produce similar guest experiences,” Waterman said. “Our culinary team has dedicated resources toward that, and the process could sometimes take months or even a year to fine-tune and create a match that will taste the same coming out of different plants.”

“The reality is that any one of our brands alone does not have significant purchasing power,” said Anissa Mandell Chance, senior vice president of supply chain at Focus Brands. “So you really have to depend on leveraging the aggregate spend across all brands in order to bring that benefit. The way we do that is by doing more with less; instead of having too many suppliers, products and SKUs, we … look at how we are able to get more products with fewer suppliers, which enables us to manage our price outline more effectively.”

Chance said that she and her team are able to negotiate as a portfolio, rather than as individual brands so they can, for example, negotiate a contract for chicken with both Moe’s Southwest Grill and Schlotzsky’s at the same time. Focus Brands is in the midst of a multi-year plan to simplify its supply chain, and will be working on decreasing its number of suppliers by 2025. The company is also working on a supplier score card to look at multiple aspects of the supplier’s relationship, including pricing and overall quality to help improve or reevaluate partnerships.

Relationships with suppliers are the backbone of any restaurant’s supply chain success, whether you’re a national chain or a small independent restaurant. Each of the experts interviewed for this story stressed the importance of having a close relationship with their suppliers, especially now when macroeconomic pressures make it challenging to get ingredients at reasonable prices. Smoothie King, for example, works with its distributors to create automated reports and predictive analytics to know exactly what each distributor has for each item and can react (and purchase) accordingly.

“We look at our distributors not just as suppliers but as partners,” Mayrand said. “If you leverage these relationships, maybe you will get more preferential treatment versus somebody who just sees it as a transactional relationship.”

“We’re always looking for feedback from suppliers and looking at how we can improve quality and resiliency or lower costs,” Waterman said. “There’s no magic bullet. It requires constant monitoring, communication, and agility. We can’t anticipate everything that comes at us, but we can try to stay ahead of the curve and have a plan.”