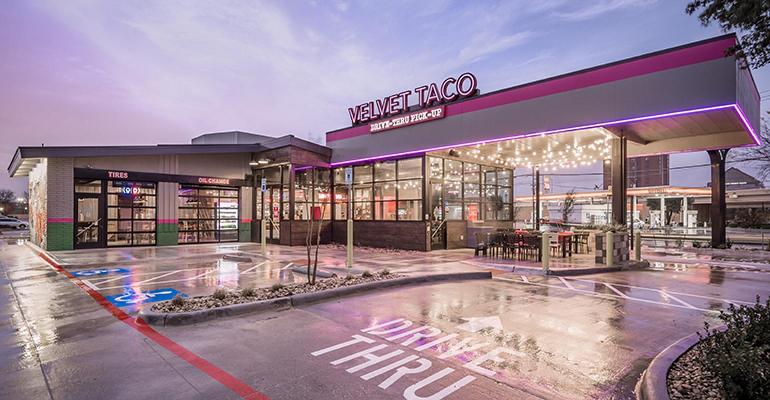 Current management to remain in place at fast-casual restaurant chain

President and CEO Clay Dover will retain his position, he said in an email. “Nothing changes except significant capital and resources to accelerate … growth,” he said.

“It’s been a great experience in the past growing Velvet Taco from four restaurants to 29 today and we have 17 more company restaurants in the pipeline for 2022/23 and I look forward to continuing leading this great brand to the next level with our new partners,” he added.

Velvet Taco was founded in Dallas in 2011 selling more than 20 varieties of taco, including a rotating special “Weekly Taco Feature” that has included tortillas stuffed with cheesesteak, alligator and chicken Cordon Bleu. The chain was named a Hot Concept by Nation’s Restaurant News in 2016 and its WTF won NRN’s MenuMasters Award for best limited time offer in 2020.

“Since we began our partnership with L Catterton, we have continued to raise the bar higher and elevate the one-of-a-kind experience that our guests have come to expect when they choose to dine with Velvet Taco,” Dover said in a statement. “L Catterton has been a tremendous partner through this chapter of our growth, and we are excited to have them remain a part of the Velvet Taco family going forward. In addition, we are thrilled to welcome LGP as a new partner as we embark on this next phase of Velvet Taco’s national expansion.”

“Velvet Taco has established itself as a leader in the fast-casual restaurant category with its innovative, culinary-driven concept and we believe the company is extremely well positioned for growth and expansion,” Hershberg said in the release. “We are excited to build on the Company’s significant momentum and strengthen its brand leadership across the U.S.”

Chris Roberts, partner in L Catterton’s Growth Fund, said he was pleased with the chain’s performance.

“We are proud of what Velvet Taco has become since we initially invested five years ago. The success has been a result of a tremendous partnership with Clay, the Velvet Taco team, and FB Society,” Roberts said. “We are excited to welcome LGP to the family and look forward to supporting Clay and the Velvet Taco team as they bring their unique concept to more and more guests across the country.”