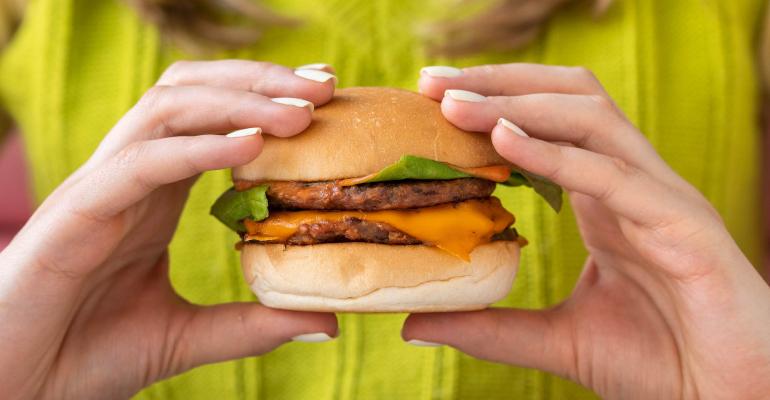 With celebrity backing and plans to disrupt the already disrupted world of plant-based proteins, U.K.-based Neat Food Co. has arrived in New York City to plot rapid growth across the U.S.

If old fashioned veggie burgers were the first generation of the plant-based movement, the arrival of the truly meat-like Impossible Foods and Beyond Meat was the 2.0 version. Now Neat Burger — as the restaurant concept is named — aims to bring a 3.0 iteration, said Tommaso Chiabra, co-founder and chair of Neat Food Co., which operates 11 fast-casual restaurants in the U.K.

Related: How plant-based menus are changing the perception of fast food

The first U.S. location of Neat Burger opened as a popup in Manhattan in April, and at least three brick-and-mortar units are scheduled to open there this year, with another 10 to 15 outlets operating out of ghost kitchens for delivery or pickup only. Globally, the company is gunning to reach 42 units by the end of the year, 436 by the end of 2026 and 1,000 by 2030, primarily company owned.

The company has launched a Series B fundraise primarily with U.S. investors following a $70 million funding round last year led by SoftBank’s Rajeev Misra. Strategic investors include actor/environmentalist Leonardo DiCaprio and race car driver Lewis Hamilton, who both serve as ambassadors to raise brand awareness.

Chiabra, who was also an early investor in Los Angeles-based Beyond Meat, said Neat Foods is positioning as a less-processed alternative meat that returns to the use of more natural ingredients, targeting an audience that sees Impossible and Beyond as more the product of a lab than a kitchen.

Still, when Neat Burger first launched in the U.K. in 2019, the burger was developed in collaboration with Beyond Meat. Last year, however, the company’s in-house food scientists transitioned to a proprietary patty that was lower in fat, and has a manufacturing process that “gives remarkably life-like consistency and texture,” according to press materials. Neat’s in-house team also developed the fish filet and other products on the menu.

Neat’s products are built around pea protein, quinoa and fruit extracts, said Chiabra. “We definitely don’t use the more chemical ingredients,” he said. “That’s not saying what the others are doing is wrong, but it’s about what we do right.”

Neat is also plotting growth as a hybrid restaurant/CPG brand, creating awareness with its brick-and-mortar and delivery-only outlets that will pave the way for a  lineup of consumer products soon to appear in grocery stores.

“What we’re doing is engaging with consumers, creating an experience where we help people transition to a flexitarian lifestyle,” said Chiabra. “We are huge believers that there will be a strong shift in consumption, and, in my opinion, there’s not enough product.”

On the menu is not only plant-based burgers, but meat-free versions of chicken, nuggets, hot dogs and a fish filet. Chiabra said a shellfish alternative is coming later this year.

In a statement, Herbert said, “Neat is leading the way in developing and creating award-winning food to appeal to all tastes; vegetarian, vegan or flexitarian. I am excited to help Neat become the dominant global player in this nascent but hugely important new market.”

Chiabra said growth in the U.S. will be company owned, though Neat is looking at some strategic joint partnerships, including one in the Middle East. Franchising could come later, but there are no immediate plans.

Meanwhile, Neat Burger joins a space that is becoming increasingly crowded with meat-free offerings, from Spike Mendelsohn’s PLNT, to the Canada-based Odd Burger, which also has sights set on U.S. growth.