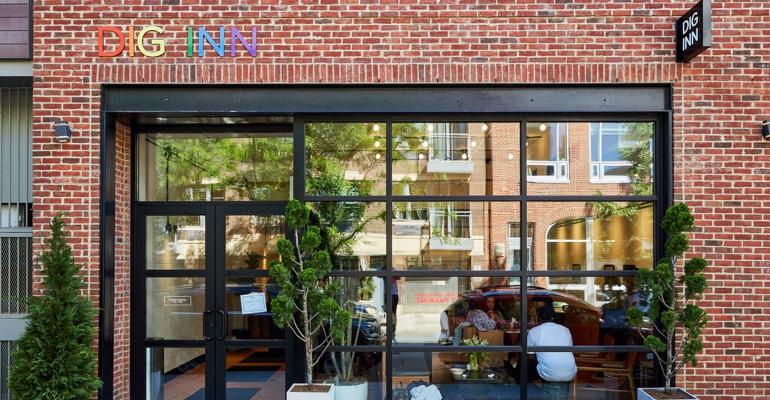 In the near future, DIG will debut new kitchen technology innovations and new format releases that aim to enable and empower people, instead of replace them.
News>Fast Casual

DIG, the vegetable-centric, multi-format restaurant group, has hired Tracy Kim as its new Chief Operating Officer. Tracy brings decades of operational and general management experience to the growing 30-unit restaurant group. Most recently, she was Chief Executive Officer at Aaptiv, a popular fitness mobile app, where she brought the company to profitability leading to the successful acquisition by PEAR Sports in 2021. Prior to joining Aaptiv, Tracy held numerous executive positions during the early stages of Shutterstock, including leading growth strategy initiatives, HR and ultimately Chief of Staff to the CEO.

As COO of DIG, Tracy is responsible for overseeing all facets of the core business, including restaurant operations, product and technology development, procurement, labor, and support operations.

“After being a devoted DIG customer for years, I’m thrilled to be joining this authentic, inspired and talented leadership team,” says Tracy Kim, COO of DIG. “I’ve been a big believer in DIG’s mission to help rebuild the food system through vegetable-forward cooking, responsible and thoughtful sourcing, and intentional community-building. It brings me great joy to serve every guest and employee with the DIG experience as we expand in current and future markets.”

Tracy joins DIG during an exciting period of growth for the 11-year-old company. In October 2021, DIG announced its series F raise of $65 million in a round supported by existing investors including EHI (the fund affiliated with Danny Meyer’s Union Square Hospitality Group), Monogram Capital Partners, and Avalt, as well as new investors Kitchen Fund, Eminence Capital, LP and Inherent Group. The funding round has enabled DIG to re-open key locations temporarily closed due to COVID-19, as well as expand its footprint in established and new markets, including New York, Pennsylvania, and Massachusetts, with the goal of bringing its total restaurant count from 30 to 60 over the next three years. In April 2022, DIG began offering a four-day workweek schedule option to all hourly restaurant employees in a move that is, to their knowledge, the first and largest of its kind in the restaurant industry.

In the near future, DIG will debut new kitchen technology innovations and new format releases that aim to enable and empower people, instead of replace them. One such program is already taking shape at DIG on 4th, the team’s latest venture that opened in May 2022 in Manhattan’s Union Square and combines the best of their quick-service, full-service, and delivery capabilities to provide an entirely new dining experience.

DIG is a multi-city, multi-format restaurant group with a core focus on vegetable-forward cooking served from their portfolio of fast-casual restaurants, annex programs, strategic partners, their dining & innovation space, 232 Bleecker in New York City, and their latest venture, DIG on 4th in Manhattan’s Union Square. Behind their food is responsible and thoughtful sourcing, much of which is grown in their upstate NY farm, DIG Acres, or sourced from their close network of regional farmers and partners. Founded by CEO Adam Eskin in 2011, DIG is on a mission to rebuild the food system not only through creating supply chain, operational, and environmental efficiencies but by changing overall consumer perception of vegetables from a daily necessity to a craveable meal.