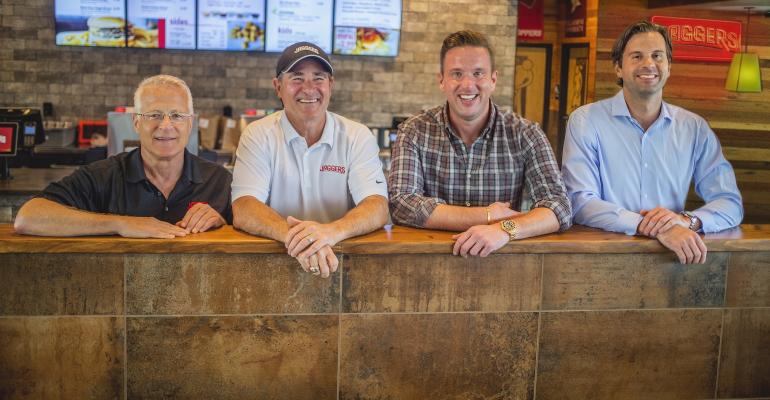 Jaggers, which the Louisville, Ky.-based casual-dining company first opened in 2014, has three company-owned restaurants open in Greenwood, Ind., Noblesville, Ind., and Louisville. A fourth company-owned location is scheduled to open this fall in the Indianapolis area.

Adam Saxton, co-CEO of The Saxton Group, said the first franchise agreement was signed Sept. 15 and the first Jaggers unit will open in 2022, with the location still being determined. Restaurants are generally about 3,000 square feet with drive-thru access.

The Saxton Group has franchised the McAlister’s Deli concept since 1999 and has 85 restaurants in six states, including Kansas, Oklahoma and Texas

“What's exciting to me about Jaggers is it's like you took quick-service’s greatest hits — chicken, cheeseburgers, shakes, great salads, French fries, tater tots —and elevated the food quality,” Saxton said, emphasizing that the brand was quick and efficient. Per-person check averages are around $10.

“All the real estate will have drive-thru capability,” Saxton said, adding that the location for the group’s first Jaggers unit hasn’t yet been decided but will likely be in a legacy market in Texas.

While Texas Roadhouse’s domestic units are company-owned, the company has franchised the concept abroad. Hugh Carroll, president of global development for Texas Roadhouse, is overseeing the domestic franchising of Jaggers.

Saxton said The Saxton Group has four McAlister’s Delis under construction and foresees developing Jaggers alongside its current holdings. Being an early franchisee of the three-unit brand is something of a leap of faith, he said.

“We have never pursued any brand at that size because of how small they were,” Saxton said. “A lot of brands that start franchising in their infancy are not ready to provide the level of service and support to franchisees that sophisticated large multi-unit operators expect.

“However, Jaggers was developed by Texas Roadhouse and has an enormous amount of operational system sophistication,” he said. “It's built into the model based upon the Texas Roadhouse team’s experience and resources.”

Jerry Morgan, CEO and president of Texas Roadhouse, said in a statement that the company was pleased with Jaggers’ first franchisee’s track record. "We are excited about the partnership with The Saxton Group, which has deep industry knowledge and 35 years of hands-on, operational experience,” Morgan said in a statement.

As of the end of the second quarter on June 29, Texas Roadhouse had more than 640 restaurant systemwide in 49 states and 10 other countries. It also owns the Bubba’s 33 casual-dining casual-dining sports bar concept.