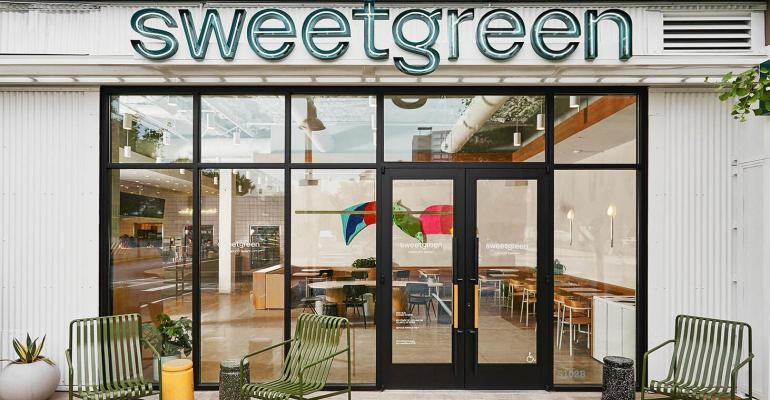 Earlier this week, Sweetgreen launched a partnership with Phoenix Suns player Devin Booker. For the next few weeks, guests can find Sweetgreen employees’ orders on TikTok and learn even more ways to customize their bowls.
News>Fast Casual

Sweetgreen is benefitting from price increases as the Los Angeles-based brand — which implemented a 10% price increase over the course of a year — is up 35% in same-store sales for the first quarter that ended March 27.

The fast-casual chain implemented a 6% increase in January 2022 and 4% in January 2021. However, Sweetgreen saw “virtually no inflationary pressures against the 6% price increase” during the first quarter according to chief financial officer Mitch Reback.

“We have a very plant-forward menu and it’s a plant-forward menu that’s locally sourced. And in the environment that we’re in, those have been two significant advantages,” said Reback. “About 88% of our food is under contract… when we look out right now, we see pressure in our costs, specifically in chicken, sunflower oil, and distribution.”

Sweetgreen expects to see a dip in sales for the second quarter owing to inflation, Reback warned. The company predicts the rest of the year’s same-store sales increases will be closer to 20%-26%.

“The path to recovery remains neither linear nor consistent; however, the strength of our brand, product, digital platform and team gives us confidence in reaching our goal of 1,000 restaurants across the United States by the end of the decade. We are well-equipped and keenly focused on building a sustainable business and our path to profitability,” Reback said.

New stores in Colorado and Florida have been exceptional performers in terms of new markets for Sweetgreen, the company said. With suburban stores outperforming urban ones, 90% of the pipeline for 2022 is suburban-focused.

“As our urban stores have recovered, we’ve seen no change in our suburban stores, which is really encouraging,” said Reback.

The first “Sweetlane,” a Sweetgreen location with a pickup drive-thru lane, is opening in Schaumburg, Ill. in the next year. There, customers will be able to place orders in advance through the app.

That’s not the only new store prototype using digital channels. Also on Friday, Sweetgreen announced the pilot of it’s first pickup kitchen, in Washington, D.C., where guests can pick up digital orders. The location will have no counter service or indoor dining.

“We do expect [the Sweetlane and the pickup kitchen] to meet or exceed our return on capital,” said Neman.

Sweetgreen is also experimenting with loyalty. After ending its loyalty app in January 2021, the chain reintroduced the app in December and piloted a program called Sweetpass in January, allowing customers to purchase a $10 pass valid for 30 days, earning them a $3 credit on app or website orders of $9.95 or more.

During the few weeks it was active, 16,600 passes sold. Ninety percent of customers surveyed indicated they would buy the pass again. New lapsed and low frequency customers made up 60% of Sweetpass users and records show they placed an additional five orders, according to Neman.

“We believe that a reimagined loyalty program that features both subscription and personalized promotional capabilities will have a forced multiplier effect when you combine it with our healthy menu designed to be eaten every day,” he said.

Earlier this week, Sweetgreen launched a partnership with Phoenix Suns player Devin Booker. For the next few weeks, guests can find Sweetgreen employees’ orders on TikTok and learn even more ways to customize their bowls.

Sweetgreen currently has over 150 locations.