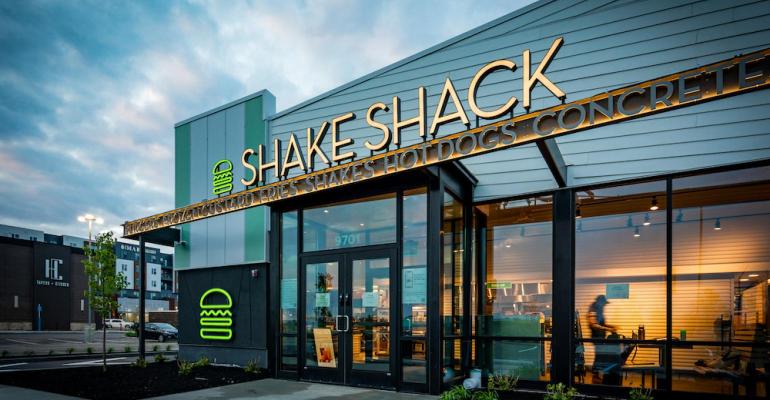 During Shake Shack's Q3 earnings call, executives noted that staffing remains a challenge as the company continues to grow its footprint.

Shake Shack reported Q3 earnings Thursday, including a nearly 18% jump in revenue from 2021 and a same-store sales increase of 6.3%

During the earnings call Thursday morning, CEO Randy Garutti said the chain’s sales were stronger than expected following Labor Day and the trend continued into October, with comp sales exceeding 8% on the month. He attributes this momentum to strong performances in the chain’s flagship urban markets and “mobility and back-to-office trends broadly improving.”

Related: How Shake Shack is transforming the drive-thru experience

Notably, in Shake Shack’s hometown market of New York City, office occupancy rates increased by more than 10% in September, its highest point since the pandemic started, according to a report from the city’s Comptroller.

“We are cautiously optimistic about the long-term for urban markets, but they are improving,” he said.

These markets are just part of Shake Shack’s Q3 story as the chain looks to expand its presence in suburban markets and non-traditional locations, as well. The company currently has 260 U.S. locations with 35 Shake Shacks under construction – its largest number of restaurants being built at one time. About one-third of those are drive-thru locations, a relatively new format for the company as it diversifies its real estate portfolio.

“Whoever said we couldn’t do a drive-thru or a food court? Here’s how I think about places like a roadside (location): you wouldn’t traditionally see a brand with the ingredient level of Shake Shack there, but that’s what people want. We think there’s a huge opportunity to disrupt those environments. That’s what the drive-thru is about, the expansion of these categories. We can continue to do that so the next generation of burger eaters have higher expectations.”

As has been the case throughout the past few quarters, however, construction and permitting delays continue to hinder Shake Shack’s targeted development pace.

“It has been a frustrating year of extended timelines (on development). But the tide is slowly turning,” Garutti said.

As that tide turns, Shake Shack faces an even bigger challenge – staffing its new stores while fully staffing its existing stores to support the return of dine-in business. Garutti and CFO Katie Fogerty referenced the chain’s labor issues, and potential solutions, several times throughout Thursday’s call.

“We believe we’re going to continue to increase (restaurant-level margins) over time, but some of the macro factors impacting the company, we need some of those to go our way,” Garutti said. “We’ve got to continue to get staffed up. We’re missing an opportunity by not having optimized hours or throughput. (Labor) remains a challenge and we are putting massive efforts toward staffing and bulking up our teams to handle this.”

Those efforts include a $10 million investment, made last year to go toward higher wages, grants and leadership development; expanded benefits and advancement opportunities – including the company’s Shift Up training program – announced this year; and the addition of tipping in some markets.

“(Staffing) is just hard right now, and we’ve never been more innovative when it comes to our commitment to our people. We know that’s where we need to do better and we’re making really big improvements,” Garruti said.

He added that finding great team members is going to cost more and the company is dedicating some of its G&A budget to recruitment and retention. Shake Shack is also investing in technology to ease some of its staffing pressures. Fogerty noted that kiosks have helped maximize labor efficiencies in-store, for instance, and the company plans to have the technology systemwide by the end of next year.

“Kiosks are our highest-margin channel and also our highest in-check channel. We are rolling them out to nearly all Shacks by the end of next year and look at them as another way we’re leaning into to help drive margin performance and address labor challenges,” she said.

Though executives identified labor as a challenge, Garutti said the company isn’t exploring automation at this time.

“We don’t think it’s the best use of our time. I think of automation in terms of digital ordering and kiosks and other web and app channels,” he said. “I’m excited about it for the future, but it’s not the best time for us to be frontrunners on that.”

That said, the company is committed to operational improvements as dine-in traffic returns and off-premises business remains elevated.

“You’ve got a return to increased food traffic on top of digital channels that never existed a few years ago,” Garutti said. “So, we’ve got to get better, and it starts with staffing.”