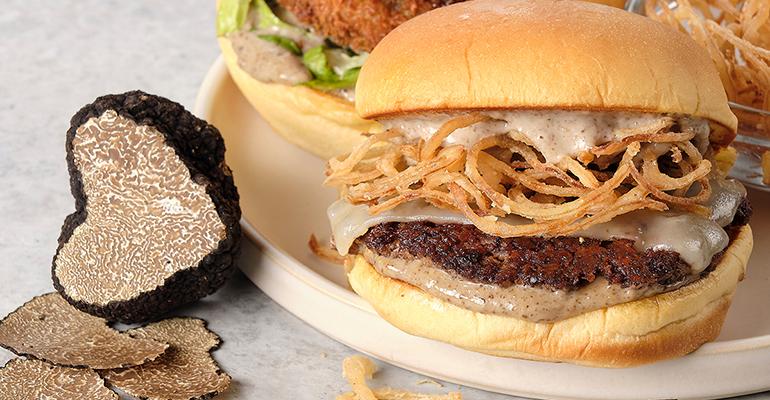 Fast casual chain launches "luxurious" line of burgers topped with a black truffle sauce; the burgers range from about $9 to $12, which the brand's culinary director calls reasonably priced for elevated product line

Shake Shack, which is struggling with guest counts in large cities where foot traffic and tourism are down, is tempting big city diners with a new luxurious line of burgers featuring black truffle sauce.

Regalis Foods, founded by Ian Purkayastha, is a well-regarded importer of luxury products from more than 40 countries. It supplies 90% of the Michelin-starred restaurants in the U.S., according to the company’s website.  The company’s black truffle oil is made with California extra virgin olive oil and black winter truffles from Valencia, Spain.

Shake Shack is selling the truffle burgers through the end of Decmeber at Shake Shacks in Madison Square Park and the Upper West Side in New York City and Glendale and El Segundo in the greater Los Angeles area.

"Our black truffle sauce made with Regalis Foods’ USDA Organic Black Truffle Arbequina Oil is what makes this limited-edition menu seem more luxurious, but in the end, its pure comfort all the way," he told NRN. "The sauce has truffle and umami flavors with the addition of caramelized mushrooms, thyme, fresh bay leaf, port and madeira fortified wines and parmesan cheese. We add aged sherry vinegar to balance the umami and overall richness."

All the burgers are served on a toasted Martin’s potato bun. The company is also selling Black Truffle Sauce on the side for a $1.50.

The menu was created in collaboration with Purkayastha and his team.

"We wanted to ensure it was elevated, inspired by our fine dining heritage and with a focus on premium ingredients," Rosati said a statement.