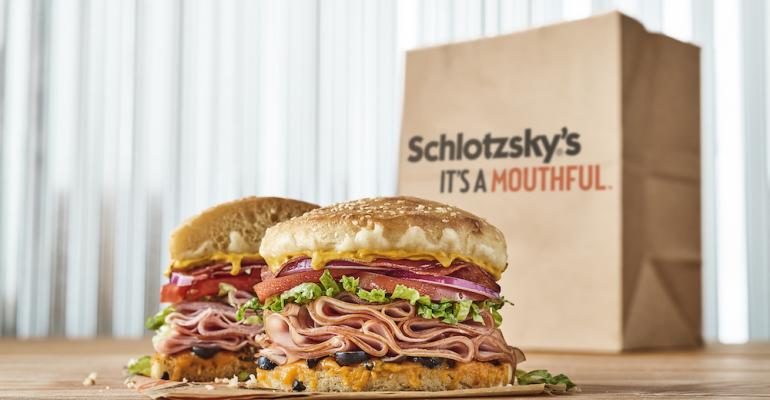 Fast-casual sandwich chain Schlotzsky’s has streamlined its menu and added more meat to most of its sandwiches in response to consumer demand.

Medium-sized sandwiches, which is the size that most customers order according to chief brand officer Tory Bartlett, now have more than 30% more meat than they did before the menu revamp. Large sandwiches have a little less than 30% more meat and small ones have around 15% more, he said.

Prices have remained basically the same.

Bartlett said the chain of more than 300 locations negotiated with its meat vendors to keep costs down thanks to anticipated higher purchase volumes resulting from the fact that they’ll be using more meat per sandwich.

“We’ve actually been able to negate, or have minimal price increases, across the board by leaning into our vendor partners and working with this increased volume. … It varies by franchise partner, but [any price increase is] very minor,” he said.

The menu also has been adjusted to reduce the number of unique sandwich offerings from 27 to 12. Although slow sellers such as the Caprese and Tuscan sandwiches were removed, most of the streamlining came through reorganization. For example, instead of having a Fiesta Chicken sandwich and a Fiesta Turkey, now there’s just a Fiesta sandwich — which has cheese, olives, roasted red peppers, lettuce, red and green onions, tomato and chipotle mayonnaise — for which guests can choose their protein from smoked turkey, smoked chicken, ham or roast beef.

“It makes it easier for the staff and the guest.” Bartlett said.

Bartlett said the menu change was planned even before the pandemic as consumers often chose the option of adding more meat to their sandwich for a higher cost.

“All the consumer feedback we got was that they appreciate having more meat on their sandwiches,” he said. “So we just said, ‘Let’s make every Schlotzsky’s the way people are asking for it.’”

And the change fits in well to the current needs of guests and franchisees alike.

“Obviously as the world’s changed,” Bartlett said. “We look at the staffing and training and streamlining the menu so consumers can pull up to the drive-thru and see right away what looks great.”

Schlotzsky’s is promoting the menu change with an advertising campaign starring professional football legend Terry Bradshaw. Titled “It’s a Mouthful,” it refers to the larger sandwiches as well as saying and spelling Schlotzsky’s, Bartlett said.

The campaign includes a “Train for a Mouthful” routine of three exercises developed with Bradshaw: The Breadlift, which is a bicep curl with a Schlotzsky’s sandwich, ending with a bite of sandwich; The Chew Chew, which is a shoulder press with two sandwich halves, ending in a bite of sandwich; and the Stack on Deck, which involves grasping a sandwich in each hand, pushing your arms out to the side, bringing them back and taking a bite.

Schlotzsky’s is a subsidiary of Focus Brands, based in Atlanta.