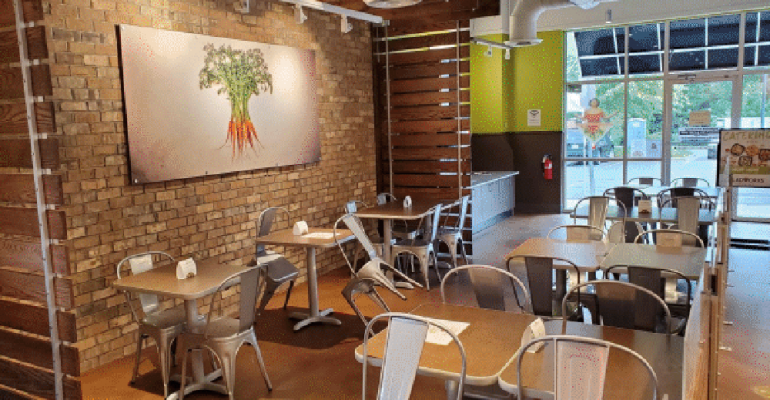 Saladworks opened the first of a new prototype design in Charlotte, N.C. on Sept. 9 that aims to appeal to Millennial and GenZ diners with an Instagram-friendly “WOW Wall,” and digital menu boards.

The new design also offers a value-engineered configuration that will increase seating without adding to the footprint, which the Conshohocken, Pa.-based fast-casual chain said could save franchisees between $60,000 to $80,000 per unit. Each restaurant will have an average of six more seats than the original locations, shortening the payback ratio for franchisees.

"The cost to buildout has significantly decreased since I made it a focus area two years ago with our restaurants, and it's saving everyone money, including our franchisees most of all," said Eric Lavinder, Saladworks’ vice president of development, in a statement. "We're not cutting corners in the process either. We're just being more efficient and selective.”

Design-wise, these new units will look towards the future. The 30-year-old chain is marketing itself to the Millennials and Gen Zers with its new Instagram Wall and “WOW Wall.” Saladworks’ new branding messages are displayed prominently with calls to “Be Original,” with the company said will “celebrate the uniqueness and originality of every guest.”

Saladworks currently has more than 100 units in 18 states and two countries. Mears told NRN that there are plans for a West Coast expansion and the brand is currently dabbling in ghost kitchens and new technology.

See photos of the new prototype.