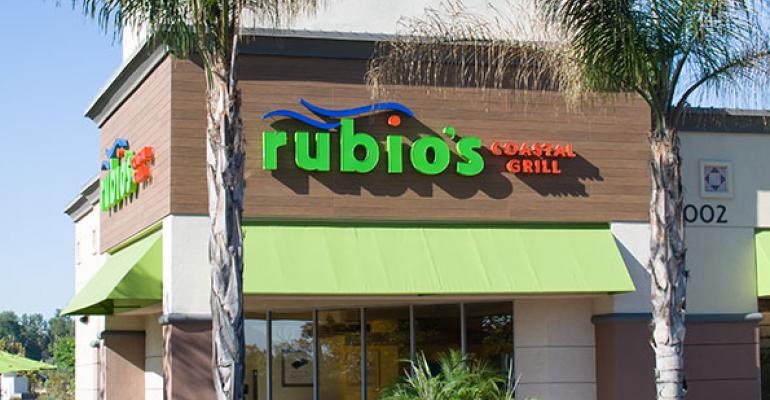 Rubio’s Fresh Mexican Grill is changing its name and renewing its focus on seafood as part of a brand revamp.

The fast-casual chain is slowly evolving into “Rubio’s Coastal Grill,” as the Carlsbad, Calif.-based concept works through a remodeling program that will eventually reach all 193 restaurants. The new ocean-themed décor will also be the design going forward for the six or seven new units scheduled to open this year.

Ralph Rubio, who founded the concept in 1983, said the move will further differentiate Rubio’s from the crowded fast-casual Mexican segment, which is dominated by Chipotle Mexican Grill.

Rubio’s has long been known for its fish tacos. But the brand revamp will highlight seafood with a premium menu that currently includes such options as grilled mahi mahi, salmon and tilapia.

“We wanted to take our menu more to a coastal place to better leverage our expertise around seafood,” Rubio said. “The better-for-you trend is really strong right now and people are looking for healthier options. Seafood plays to that.”

While Rubio’s has long competed in the fast-casual segment, the brand was once positioned as a high-end quick-service concept, Rubio said.

With the shift to the Coastal Grill concept, the atmosphere of the restaurants will be upgraded with a design that better fits the upgraded menu, he said.

“We’ve been in evolution all along,” Rubio said. “We were always moving up the spectrum.”

However, revamping the brand restaurant by restaurant is a bit like “changing a tire while driving 60 miles per hour down the freeway,” Rubio said. “We’ll be running two systems parallel.”

For now, marketing materials will use the simplified name “Rubio’s” until the chain gets about halfway through the remodels. At that point, the references will shift to Rubio’s Coastal Grill.

So far, about 15 to 20 restaurants have been remodeled with the new name, Rubio said. In 2015, another 40 to 45 locations will be remodeled.

In tests, the brand revamp has resulted in a considerable sales lift, Rubio said, though he declined to give specific numbers. Remodeling generally costs about $200,000 or less per unit. “We’re very pleased with the return on our investment,” he said.

Average unit volume is about $1.1 million, with an average check of about $12, a number that has been climbing slowly with the introduction of more seafood options.

Rubio described the brand’s positioning as a value play. Though prices are higher than other fast-casual Mexican concepts, he said it’s a great deal because of the quality of the food.

“You can get an amazing grilled shrimp burrito for around $8,” Rubio said. “There’s a huge value opportunity here.”

The evolution comes four years after former parent company Rubio’s Restaurants Inc. was acquired by private-equity firm Mill Road Capital LP for $91 million. As part of the deal, Rubio gave up his majority stake, but he remains a significant shareholder and continues to lead the culinary team, he said.

Rubio said the chain had sales of about $200 million in fiscal 2014, with same-store sales around 6 percent, including a 2-percent increase in transactions, a trend that has been positive for three consecutive years, he added.

Almost all of Rubio’s restaurants are company owned, and the company intends to keep it that way. A handful of units are franchised in Las Vegas, where restaurants are in casinos, but Rubio said there are no plans to grow through franchising at this time.

The company aims to expand the brand nationwide, he said, especially as American diners across the country embrace seafood tacos — something Chipotle doesn’t offer — rather than chicken, beef or pork.

“Going national with the brand was always my intention,” Rubio said. “With this positioning, we have a lot of runway.”