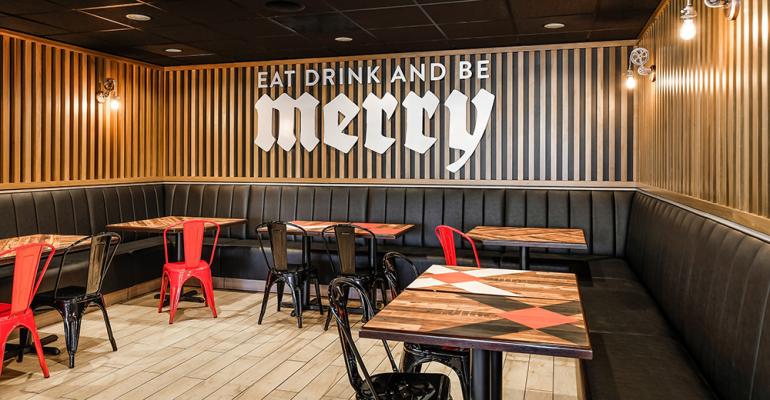 Start Slideshow ›
Brand plans to expand renovation in Sacramento, Calif., to other stores in system

Round Table Pizza has pulled the wraps from a new store design in Sacramento, Calif., that it plans to expand to the brand’s 440-unit system, the company said last week.

Atlanta-based Round Table said the Sacramento location is the first to undergo a complete redesign to embody Round Table’s recently updated logo and brand identity – “Pizza Royalty.”

“Creating a new signature look for a restaurant system with a 60-year legacy required us to draw inspiration from the past, while also designing a store concept built for the future,” said Jenn Johnston, Round Table’s chief brand officer and president of franchise operations for Global Franchise Group LLC, which bought Round Table in 2017.

The new unit offer new features such as a beer wall, signature round booths, game room and party room. The company said the new amenities could be used for family outings, birthday parties, date nights and fantasy sports drafts.

The redesign highlights the brand’s iconic black, white and red colors. A silhouette of a knight’s helmet featured in the new Round Table logo can be found throughout the updated store.

Similar renovations are planned at two more California stores, one in Oakdale and another in Pittsburg.