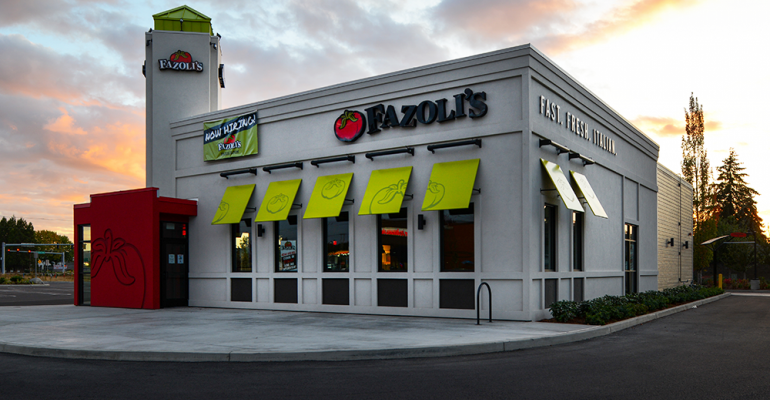 Restaurants Rise: Rick Petralia of Fazoli’s and Nate Weir of Modern Market and Lemonade share how they’ve adjusted their menus during the coronavirus pandemic

The corporate chefs discuss new considerations that are now necessary

Restaurants have to work smarter and more efficiently as they face the challenges of the novel coronavirus pandemic, but there is still room for creativity on the menu, chefs told attendees of virtual panel on “The New Menu Equation for Restaurants” Tuesday.

“Everything from training to supply chain has been disrupted,” said Nate Weir, vice president of culinary at Modern Restaurant Concepts, which includes Modern Market Eatery and Lemonade, each with around 30 units.

Rick Petralia, culinary director of innovation of Fazoli’s restaurants, with about 215 units, said he had it a bit easier, as around 55% of the chain’s business was already off-premise, mostly via drive-thru, before the pandemic struck. Although in late March Fazoli’s saw a huge decline in sales, Petralia said that a value deal of five dishes each for less than $5 brought guests back, and the past few weeks have seen the best sales in the chain’s history.

Now Fazoli’s has launched premium items as part of a Parmesan Fest, including a Parmesan Crusted Shrimp Bake, with shrimp simmered in black-pepper Florentine sauce with roasted red peppers and gemelli pasta, all baked with mozzarella and a Parmesan panko crust for around $8.49.

Related: Carl Howard, CEO of Fazoli’s, discusses how the chain has thrived during the coronavirus pandemic

Value is still important, however, so the new lineup includes a simpler Parmesan-crusted gemelli pasta bake for $4.99.

Weir said that, with limited staff putting their lives on the line as they work, he has tried not to bring in new ingredients and instead innovated with what already is coming into the restaurant.

“I am just amazed, frankly, by our teams and the effort that they’re putting forth,” he said. “I can’t imagine, honestly, going to work in the restaurant every single day. … Facing wave after wave of guests who – who knows where they’ve been? — it’s a scary proposition. I’m amazed and encouraged by our team’s bravery and their willingness to give great experiences in the midst of that.”

Given the circumstances, there’s no need to train them on a new protein. So for the summer at Modern Market, he’s rolling out a Summer Cobb salad using “internally shopped ingredients” borrowed from existing menu items: Fresh corn off the cob, strawberries, watermelon radishes, bacon, hard-boiled eggs, avocado and blue cheese over romaine lettuce.

“We don’t have a burrito bowl right now, but we were able to pull those ingredients together,” he said.

Lemonade is normally a sort of high-end cafeteria-style restaurant, which is a non-starter in this day and age. So the scoops of composed salads and standalone proteins that are central to the concept have been changed into more traditional dishes  suitable for takeout. For example, Weir and his team built a bowl around coriander crusted tuna that had been an à la carte item. It includes riced cauliflower, edamame, macadamia nuts and sweet ponzu sauce.

Weir said that dish is not only easier for carryout and delivery, but it also photographs well, which is important for promoting it online.

Petralia said that, since the chain had to shift from 55% off-premise to 100% off-premise for a while, they figured out how to adjust the conveyor oven that they use to cook their baked pasta and signature breadsticks. Previously, it cooked the food in a minute and 30 seconds, but they worked to reduce that to a minute and 10 seconds.

“Part of me was really happy when we found this out, and part of me was like, ‘Why the heck didn’t we figure this out years ago?’” he said. “That’s helped us out immensely.”

Weir said his restaurants had the opposite situation as they switched to order-ahead pickup delivery. He said for dine-in guests their goal was a 6-minute ticket time, but now when orders come in they usually have 15-20 minutes to prepare them. So they can roast vegetables to order and in general improve the quality of the food by cooking it to order, allowing it to travel better and to cut down on waste.

He said they’re also looking for ways to cut down on waste in packaging, since they’re using so much more of it these days.

“A little [plastic] ramekin of this, a little ramekin of that, once you’re doing hundreds of those items you start to feel a little guilty about the amount of plastic going out. So we look for ways to either reduce that or move some things into fiber packaging,” he said.

He’s also making sure that they use their containers the way they’re intended, such as punching out the little tabs on pizza boxes so the steam can evaporate.

“A simple thing, not something we usually talk about, but it actually makes kind of a big difference if your pizza’s being delivered,” he said.

Petralia said he was lucky in the packaging department, too, as they had improved it last year, moving to clamshells with clear plastic lids that make it easy to see what’s inside.

“We had these foam bowls that had lids that were a separate SKU, and they always kept popping off. I can’t imagine doing 100% off-premise with the packaging we had before,” he said, especially since the lids were  opaque.

Looking ahead, Petralia said he was planning on launching premium mac & cheese options in 2021 with proteins like lobster and Angus beef. He said they were also looking forward to “addressing some holes that we’ve known we’ve had on the menu for quite some time,” such as gluten-free and low-carb items.

He said tests on low-carb pasta have done “surprisingly well,” especially since they were testing on existing customers who wouldn’t have come in looking for gluten-free items since those items aren’t normally available.

Weir said that as Modern Restaurants moves toward franchising in the next year or two, he’s working on developing some proteins cooked in sous-vide for better consistency, including chicken, beef and salmon.

He’s also rolling out riced cauliflower at both brands and a keto-pizza crust.

He said the trials of the pandemic have made the restaurants stronger.

“We’ve learned a ton through this,” he said. “I think we’ve come out the other side all the better for it and in a lot of ways not just stronger, but we’ve also proven that a lot of the systems we had in place really worked and allowed us to survive and thrive. So we’re looking for that new phase of growth.”