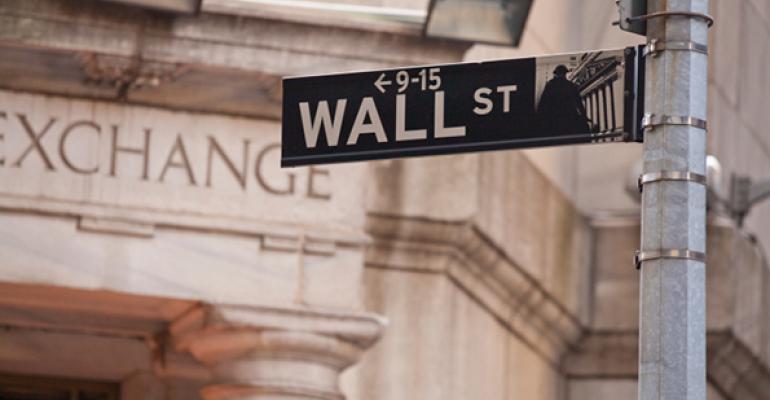 Restaurant Finance Watch: Is there a fast-casual bubble?

NRN editor and restaurant finance expert Jonathan Maze breaks down what you should be watching in the industry this week. Connect with him on the latest finance trends and news at&nbsp;@jonathanmaze and [email protected] RELATED: &bull; Shake Shack IPO could be biggest in restaurant history &bull; Romano&rsquo;s Macaroni Grill buyer banks on fast casual &bull;&nbsp;More restaurant finance news

Over the past couple of years, investors have poured money into newly public fast-casual operators like The Habit Restaurants Inc., Zoe’s Kitchen Inc. and Shake Shack Inc., to the point that such companies have valuations eliciting comparisons to the infamous dot-com bubble of the late 1990s.

The reception given to Shake Shack when it made its public debut in January elicited a level of excitement similar to the euphoria over Internet stocks nearly 20 years ago. Shake Shack is a popular name, with its home in New York and a reputation that far outpaces its 62-unit size.

Writers keep comparing it to McDonald’s — a chain 548 times its size — while glowing about such financially important measures as its Instagram following. 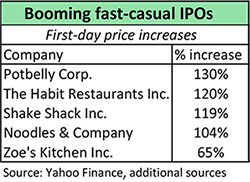 There’s no question that valuations given to fast-casual operators in particular when they go public have been astronomical.

In addition, many of the chains that have gone public over the past two years are much smaller and less proven. While Chipotle, Noodles & Company and Potbelly Corp. had hundreds of units when they went public, Shake Shack, Habit and Zoe’s all had less than 120 locations.

These valuations for such small concepts have led to plenty of bubble talk.

By one definition, the fast-casual sector is in a bubble. Investors seeking growth in the restaurant industry are putting money into fast-casual companies, even if it means paying high prices.

The problem is that many of these companies struggle to maintain the values they get out of the gate. Both Noodles and Potbelly ultimately came back down to earth following their respective IPOs in 2013, as both chains’ sales numbers caused investor consternation.

Habit is down 26 percent, including 6 percent in the past two days, since reporting its fourth-quarter earnings on Tuesday. As best as I can tell, its only sin was predicting slower sales growth after reporting double-digit same-store sales in the fourth quarter.

Even Shake Shack has struggled to meet the $52 per share high it reached at its peak on its first day of trading. It fell on Thursday after an earnings disappointment.

But Shake Shack’s stock is back up again today, apparently because of all of those Instagram followers.