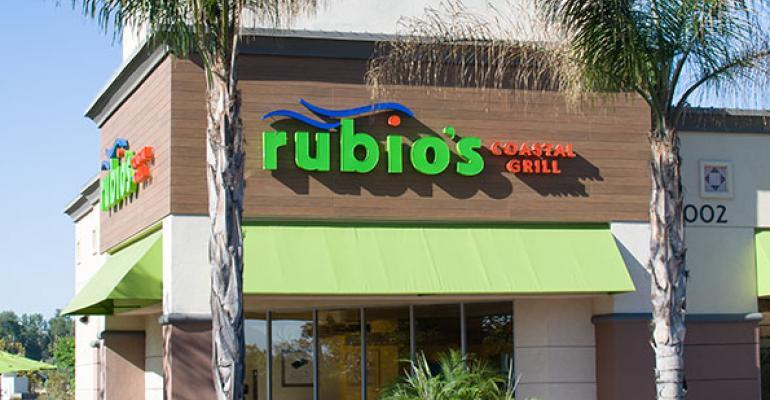 Carlsbad, Calif.-based fast-casual chain Rubio’s Coastal Grill confirmed this week that it will permanently shutter a dozen restaurants due to the business impact of COVID-19.

Though restaurants across the U.S. have been allowed to reopen dining rooms for several weeks, some have suffered economic damage that can’t be repaired. Permanent closures, as predicted by industry watchers, are hitting independent restaurants as well as regional and national chains.

“Rubio’s has made the difficult decision to close 12 locations in the Colorado and Florida markets, and is in the process of formalizing these closures now,” the company told Nation’s Restaurant News in a statement. “Rubio’s will continue to focus on their core markets — California, Arizona and Nevada.”

Like other chains, Rubio's restaurants transitioned to off-premise operations when dining rooms were forced to close in March.

“We pivoted to offer curbside pick up at almost all locations, and have offered takeout, express pick up and delivery throughout the quarantine,” Rubio’s co-founder Ralph Rubio said in a statement. “We have re-opened dining rooms and our outdoor patios in Arizona, Nevada and almost all of California, based on the guidance of state and local health officials, and have put in place strict social distancing protocols both inside and outside the restaurants.”

Another chain permanently closing stores is Fuddruckers, whose parent company is Luby’s Inc. In early June, Luby’s Inc., which also operates Luby’s Cafeteria, said it would sell its real estate assets and wind down its operating divisions if it can’t be sold.

According to the Orange County Register, the company has permanently closed a few Southern California locations, including units in Burbank, Ontario and Lake Forest.

The chains join a fray of restaurant companies that have been forced to shutter operations at locations that could not survive the catastrophic economic impact of COVID-19, a pandemic that triggered the economy to come to a grinding halt for a few months.

Other chains that have permanently closed locations include 97 Souplantation and Sweet Tomatoes locations, nearly 50, or about half, of Bravo and Brio locations and more than 50 Specialty’s Café & Bakery restaurants.

According to the latest research by The NPD Group, total transactions at major U.S. restaurant chains decreased 14% for the week ending June 7, compared to the same week a year ago. During the peak of the COVID-19 crisis, transactions declined 43% in week ending April 12.

Earlier this week, The National Restaurant Association said restaurant operators don’t expect to be profitable within the next six months. The industry lost $40 billion in May, bringing the total economic losses tied to the coronavirus crisis to $120 billion, the trade association said.

A research report released by the Independent Restaurant Coalition last week said up to 85% of independently owned mom-and-pop restaurants could close permanently by the end of the year if they don’t receive additional financial support. The IRC is an advocacy group for the nation’s estimated 500,000 independent restaurants, or about 76% of all restaurants.