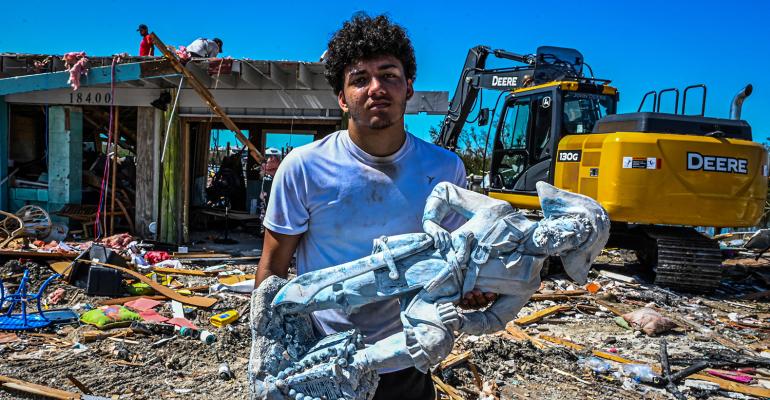 Restaurants and bars continued this week to recover from the devastating impact of Hurricane Ian, which hit the western coast of Florida as a Category 4 storm on Sept. 29 and then made landfall in South Carolina as a Category 1 on Sept. 30.

Related: Hurricane Ian was so devastating, that even Waffle House closed

Bradenton, Fla.-based First Watch Restaurant Group Inc., the daytime concept, said 85 of its more than 445 restaurants closed for at least one business day because of the storm, which will be reported in its fourth quarter. As of Monday, Oct. 3, all but 10 of those restaurants had reopened, the company said.

“The remaining unopened restaurants are located primarily in the Fort Myers and Naples markets where damage assessments and restoration of utilities are pending,” the company reported.

More than 430,000 customers were still without electricity in the state as of Tuesday, according to the PowerOutage website. A number of Florida communities remained under boil-water orders Tuesday because of damage to water systems.

“While First Watch is still assessing the full impact of Hurricane Ian, management has determined the whereabouts of the company’s employees and believes fewer than five of its restaurants sustained any significant physical damage,” the company said.

“First and foremost, I am relieved that our employees are accounted for. I am proud of our First Watch teams who have worked tirelessly to rapidly ensure the wellbeing of these impacted employees while safely stocking, staffing and reopening restaurants so that our community can once again begin to enjoy a sense of normalcy and comfort.” First Watch has restaurants in 28 states.

“Employees are safe and accounted for, and we are busy feeding first-responders and volunteers,” said a Bloomin’ spokesperson.

Orlando, Fla.-based Darden Restaurants Inc., parent to Olive Garden, LongHorn Steakhouse and other casual-dining brands, also had some closures. "We have five restaurants that are still closed today," a spokesperson said via email Tuesday. "One of those is expected to reopen tomorrow."

A number of restaurants had already reported closures and some damage from the storm.

"Our thoughts are with those impacted by Hurricane lan, and we are grateful for the first responders who are doing heroic work to help those in need," said Ophir Sternberg, BurgerFi’s executive chairman said in a statement.

“None of our locations sustained significant damage, and we expect the two franchised and two corporate-owned BurgerFi locations that are temporarily out of power to open shortly after it is restored,” the company said.

Dallas-based Fiesta Restaurant Group, which has 137 Pollo Tropical restaurants in Florida, said Tuesday all of those restaurants were closed last Friday. By Tuesday afternoon, all but four had reopened for business, and there were no serious injuries or significant facilities damage at company-owned restaurants, though there was unquantified inventory loss due to power outages..

“Our team members and supplier partners have demonstrated incredible tenacity in helping us resume operations at most of our restaurants; and we greatly appreciate their efforts as we support and feed the communities that have been impacted by Ian,” CEO Rich Stockinger said in a statement. “While the hurricane may have affected our business in the short-run and caused some minor property damage at a few locations, we are carrying on with the execution of our key growth initiatives which we believe should contribute meaningfully to our sales momentum.”