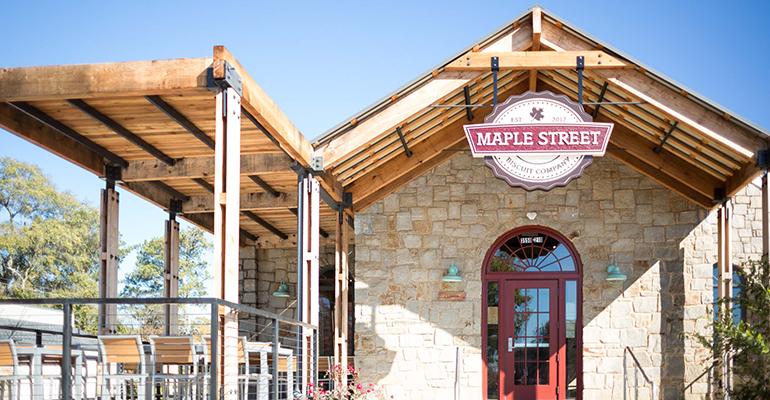 Regional chains step up with innovation

Regional restaurant brands can be nimbler and more experimental than their large-scale brethren, and three geographically disparate privately held companies are proving their innovations are paying off.

While providing different methods to distinguish themselves from their competition, ranging from a breakfast-lunch counter format or full-on casual dining, these three brands are sparking interest:

• Kansas City, Mo.-based 54th Street Restaurant & Brewhouse has proven that a name tweak and a slight turn of the brand ship can blow a sizable gust into its sales.

• And Costa Mesa, Calif.-based Lazy Dog Restaurant & Bar is honing its loyalty with a new Beer Club in its California and Nevada stores.

“Being private and a bit smaller lets us be a bit nimbler than a lot of your big chains,” said Michael Norsworthy, president of 54th Street parent Kellan Restaurant Management Inc. of Kansas City. “We’re constantly tweaking things to distinguish ourselves in decor and food.”

With no background in restaurants, former retail executive Scott Moore and construction company owner Gus Evans opened their first Maple Street Biscuit Co. in Jacksonville in November 2012. The breakfast-lunch concept, which is closed on Sundays, has grown to 31 restaurants in six states.

“We don’t have what they call store managers,” said Moore in an interview. “We have community leaders. Part of that is having people who know the community. Every store is named for the community it’s in. Even the coffee mugs have the name of the community where that store is placed at.”

Maple Street Biscuit has expanded with what Moore calls a “community leader model” of store management. The brand now has its 31 units in Florida, Georgia, North Carolina, South Carolina, Tennessee and Texas.

“For us, the community leader is basically an entrepreneur although they don’t bring an investment to the table,” he explained. “It’s their store and their team. I tell them: You are in business for yourself, but you are not alone.”

The corporate support team is always on call for the community leaders, he said. “Our job is here to serve them, so they can take care of the community,” Moore said. “They get a salary and also participate in a portion of the profits. That grows over a period of time.” 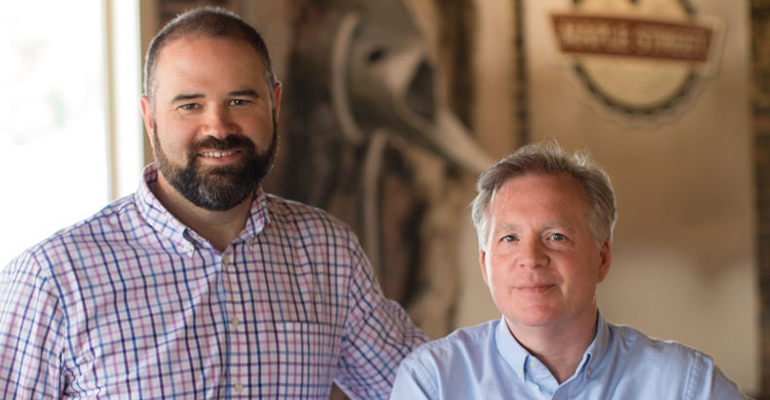 “It’s all about finding people we can help,” Moore said.

Moore added that he doesn’t believe in layers of corporate management. “When you have layers in the business, it makes communication very difficult,” he said. “Every community leader has my number and can call or text me. I’m in their stores.”

Evans and Moore started with a menu that the latter calls “comfort food with a modern twist built around fresh-baked biscuits.” The best-selling
item is “The Squawking Goat,” which is a fresh biscuit layered with breaded chicken breast and a grilled goat cheese medallion and pepper jelly. 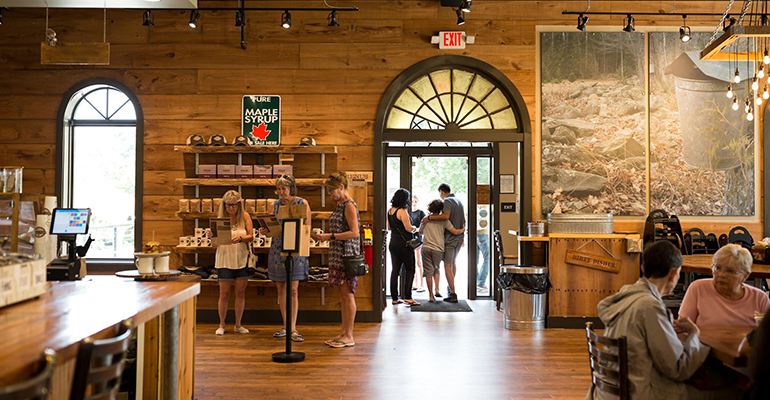 The service model is fast casual, with counter order and pickup. Cashiers ask guests for the name of their favorite movie star, and that is used to beckon customers back to pick up their orders.

Maple Street Biscuit locations are open 7 a.m. to 2 p.m. daily and 3 p.m. on Saturdays. They are closed on Sundays.

“I think of it as the 80-20 Rule,” Moore said. “I want to be open the 20 percent of the time that gets us 80 percent of the volume. Then our community leaders can lead a balanced life.” Units can partner with school groups or charities and have evening events. The store leaders like having Sunday off as well, he said.

Moore said the ideal Maple Street Biscuit is about 2,900 square feet with 100 seats inside and additional outdoor patio seating.

He said Maple Street’s mission of cultivating deep roots into the community remains firmly entrenched in the company’s growth. The next Maple Street Biscuit is under construction in Mobile, Ala.

Ten of the 29 restaurants under the 54th Street banner have changed from “grill” to “restaurant and drafthouse” over the past half dozen years, starting with a unit in San Antonio.

Norsworthy, who heads the brand started in 1990 by his father, Thomas Norsworthy, said the 54th Street restaurants now under construction will feature the “restaurant and drafthouse” package as well.

“We wanted to differentiate ourselves with the name and decor from traditional grill-and-bar genre,” Norsworthy said in an interview. “We wanted to be more of a casual-dining version of Yard House.”

Craft beers were becoming more popular, he said, and the company wanted to put more emphasis on the adult beverage side of the business. In the new units, the privately owned company installed 54 beers on tap, served at 29 degrees, in an area of the restaurant with a television package, an open keg room and communal fire pit on the patio.

The company has also provided more “step up” items on the menu, providing the lower priced burger but offering options such as a filet mignon or premium bourbons and bottles of wine. 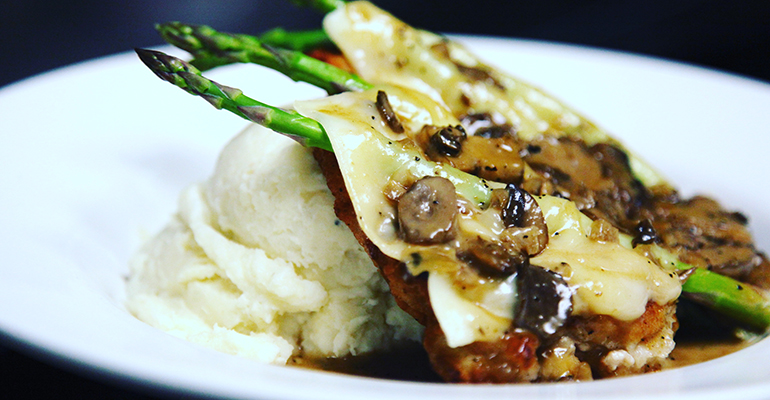 “Competition in this segment is really intense,” Norsworthy said. 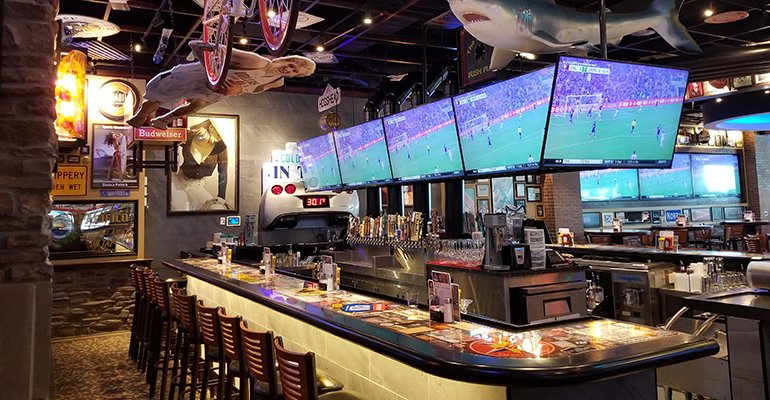 The No. 1 selling sandwich is the French dip, for which the beef is roasted and sliced in-house every day, with the Rattlesnake Pasta and chopped and tossed salads, Norsworthy said.

“No matter what economic group you are from, you should be able to find something that suits you,” he said.

Norsworthy said construction has started on three 54th Street units, with openings this year to include two more in the Dallas area and another in San Antonio.

“We’re comfortable with two openings a year,” Norsworthy said. “It’s a controlled, managed growth. The only people we have to keep happy is ourselves with no public shareholders.”

Lazy Dog Restaurants LLC, which has 30 Lazy Dog Restaurant & Bar locations, late last year pioneered a new membership-only Lazy Dog Beer Club for its guests at 21 units in its core markets of California and Nevada as well as Illinois.

Exhibiting the marketing flexibility that comes with smaller regional chains — although the brand has a few locations in Colorado, Georgia and Texas as well — Lazy Dog has capitalized on its quarterly craft beer program to create a membership club for hard-to-find brews.

“The goal of the Beer Club is a way to better engage with our guests,” said Laura Freeman, associate marketing manager, in an interview. “This is not for snooty beer snobs, but for people who are starting to get into beers.” 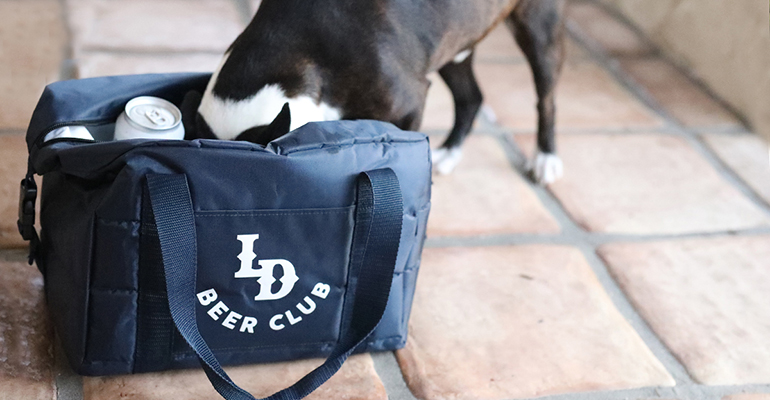 The brand debuted the program in October, giving guests the opportunity to buy a membership for $35 a quarter and get a cooler bag, beer kits that include eight bottles or cans from three different craft brewers and priority access to rare beer releases.

The beers can be picked up in the Lazy Dog units, which is similar to a wine club program at Countryside, Ill.-based Cooper’s Hawk Winery & Restaurants that has been credited with increasing traffic at the restaurants.

The membership also comes with “automatic draft beer upgrades,” getting 22-ounce pours for the price of a 16-ounce on select beers. 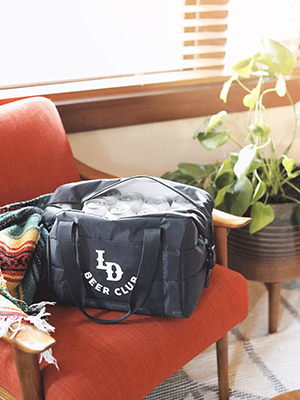 Lazy Dog is still taking what it calls beer club “charter memberships,” which allows those members to extend beer upgrades to their entire party, receive a custom embroidered patch and have a seat on the Lazy Dog Beer Club Advisory Board, which gives the company feedback on what beers and breweries to showcase.

“We’re learning as we’re going,” Freeman said. The team looks for hard-to-find beers to include on the menu for the guests, which it calls “underground releases” and offers in addition to the beer kits.

“It allows us to show guests that we are truly involved with the experience of food and beer,” she added. “Anything that encourages engagement with guests shows that we are more than just a restaurant and there’s more to the Lazy Dog brand.”

Correction April 18, 2019: This story has been edited to correct Lazy Dog's headquarters city.