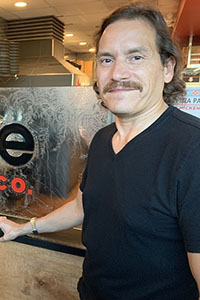 The Colony, Texas-based restaurant group is known for its fast-casual pizza brands, Pie Five Pizza and Pizza Inn, and has more than 200 locations.

“Brandon has been a difference maker for multiple brands in the restaurant space,” Mark Schwarz, chairman of Rave Restaurant Group, Inc., said in a statement. “He has a history of driving profitable traffic and leading brands to cultural relevance. He has communicated provocatively, even telling consumers Domino’s pizza wasn’t great and could be better. He once famously dug through the trash at Panda Express to expose their ingredient statements on Twitter.”

Before joining Rave Restaurant Group, Solano helped deliver positive traffic numbers to the fast-casual concept Pei Wei Asian Kitchen with initiatives like a clean-label movement and the launch of healthier items like cauliflower rice. As vice president of innovation at Domino’s, he helped launch the brand’s pizza quality relaunch in 2010, create the pizza theater concept for the company and launch the company’s bold fortressing strategy for the Seattle area.

“These brands have tremendous upside and I intend to partner with our employees and franchisees to realize every ounce of it,” Solano said in a statement. “We will be disruptive in the space and make consumers rethink their pizza choices while supporting our communities, franchisees and employees.”