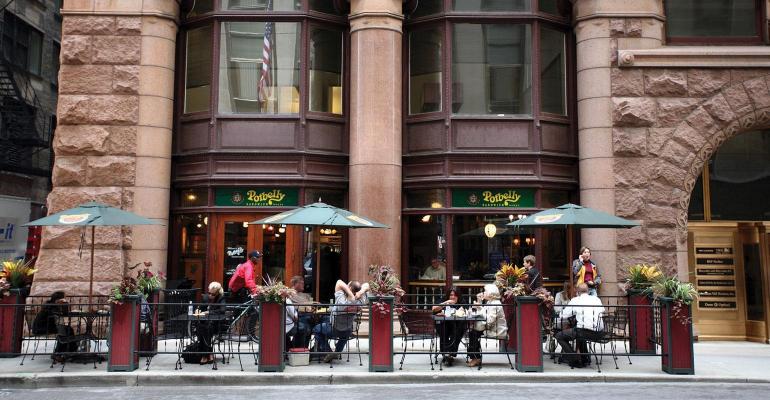 Potbelly Corp. is in discussions with landlords and is considering the permanent closure of as many as 100 shops.
News>Fast Casual

Potbelly Corp. is considering permanently closing as many as 100 of its more than 400 units as it continues discussions with landlords in the wake of coronavirus closures, company executives said Tuesday.

“We're contemplating closing the shops, frankly, as a way to strengthen the business coming out of the crisis, shops that were not profitable pre-COVID, which, of course, during this crisis, they're even more challenged,” said Steven Cirulis, Potbelly’s new chief financial and strategy officer, in a first-quarter earnings call for the Chicago-based sandwich brand.

Cirulis said 90% of the restaurants prioritized in the closure consideration had previously been impaired.

“There's more people that want to come back than we actually can provide [for],” Johnson said. “And that's important, because otherwise we have to retrain people.”

In the weeks after the COVID-19 pandemic was declared, the company began offering grocery items like deli meats, bread, cookies and cookie dough through what it called Potbelly Pantry.

“Pantry is an opportunistic thing,” Johnsons said, saying he doubted it would be long-term. He said it ranged between 3% to 5% of sales at its peak.

Potbelly has 65 units with drive-thrus, which were beneficial amid the dining room closures, Johnson said. “We just never had committed to drive-thru as a long-term part of the Potbelly experience,” he said. “What do they say: ‘No crisis should go un-wasted?’” The company has also added curbside service to its off-premise offerings.

Cirulis said sales also have experienced a daypart shift. “We’re seeing dinner uptick and that's encouraging for us as we think about whether it’s Potbelly Pantry or some of the things we may be experimenting with in the future, helping out with making Potbelly relevant beyond just that lunch period,” he said.

Johnson said restaurants performing the best were in urban and suburban areas. Locations struggling included those in airports, near universities or in central business districts, where many workers have been working from home.

Potbelly had invested in digital-sales channels before the pandemic and coronavirus has amplified those platforms, Johnson said.

“Digital sales across all delivery and pickup channels increased from 10.5% of shop revenue in January-February in 2019 to 14.8% in the same period in 2020,” he said. “Since the second week of April of this year, digital revenue is now 51.6% of shop sales. Accessibility is key to remaining competitive.”

Same-store sales declined 10.1% in for the entire quarter, but the company said they were 2.5% positive in the first 10 weeks of the period before the coronavirus pandemic was declared.

“In March, as we abruptly saw our comparable same-store sales drop to [negative] 68%, we took immediate and decisive action,” Johnson said in a statement. “Among other things, we shut down dine-in options across our shops in accordance with state mandates, temporarily closed 36 company-operated shops, furloughed one-third of our corporate employees and cut salaries for all executives and corporate employees by 25%. All of these decisions were necessary and painful.”

Same-store sales were down 45% in the first week of May, he said.

“We are operating with a cash-preservation mindset,” Johnson said in prepared remarks, noting that the company drew down $40 million of available capacity under its revolving credit facility.

In late April, Potbelly said it would return a $10 million loan approved through the Paycheck Protection Program of the Coronavirus Aid, Relief and Economic Security Act.