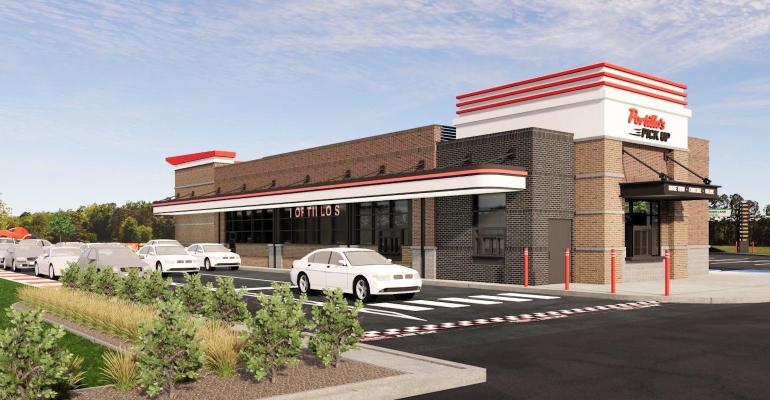 Portillo's Inc.
This drive-thru-only unit in Joliet, Ill., was one of Portillo's two openings so far this year.
News>Fast Casual

Facing permitting and construction hurdles, Portillo’s Inc. has clustered as many as five new restaurant openings into the final two months of the year, the company said Thursday.

The Chicago-based fast-casual company, which went public a year ago, said the development pipeline for 2023 and 2024 appears to clearer than in 2022. The company has at least nine new restaurants planned in 2023.

“We continue to face lengthy permitting processes, which were largely responsible for clustering these builds into the fourth quarter,” said Michael Osanloo, Portillo’s CEO and president, on an earnings call Thursday for the third quarter ended Sept. 25.  “Our teams have been preparing well in advance to open the last five restaurants.”

A new Portillo’s in Schererville, Ind., is scheduled to open next week and four others are planned in in the Sun Belt: West Kissimmee, Fla.; Tucson and Gilbert Ariz.; and The Colony, Texas. Portillo’s had opened two restaurants so far in 2022: a drive-thru only unit in Joliet, Ill., in February and a traditional location in St. Petersburg, Fla., in April.

Osanloo said one of year’s five remaining restaurant openings may be pushed into 2023. This year, he added, “we learned a lot about how much permitting time we need to budget.”

As for 2023, Osanloo added, “we are far, far ahead of where we were the last several years in terms of development pipeline. We are well underway to hit our targets and it's probably going to be still more back-end loaded than I think we would ideally like — more in the second and third quarters.” He said the pipeline for 2024 was “even richer.”

To accommodate commodity inflation, Michelle Hook, Portillo’s chief financial officer, said the company increased menu prices on certain items by about 3% mid-October, which she said “combined with pricing actions taken in 2021 resulted in an effective increase in price of approximately 8.2% in the third quarter of 2022 and 7.4% year to date.”

“Our guests expect a high-quality meal at a great price point,” he said. “This is something we carefully protect. So we've surgically taken price across our menu to keep up with inflationary trends while ensuring our guests feel that relative value in the quality and abundance of our food.” Guest satisfaction survey results indicated that approach was “prudent,” he said.