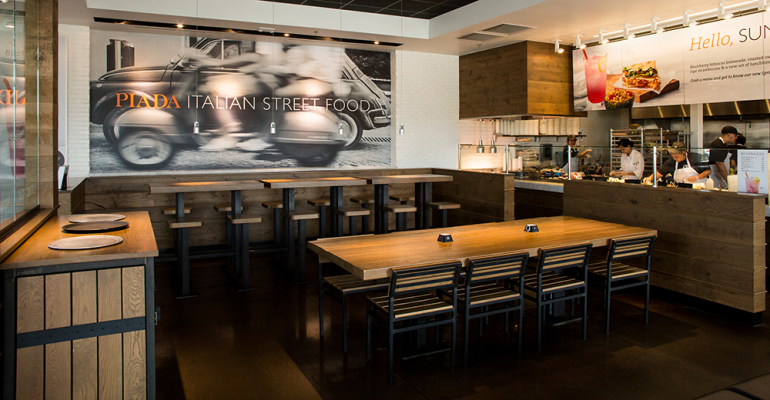 Piada Italian Street Food, a 40-unit chain based in Columbus, Ohio, has spent the past two years moving away from the model of infinitely customizable food that’s the basis of so many fast-casual concepts. While the concept’s build-it-yourself element that is typical of fast-casual chains is still in place, Piada has shifted to composed menu items rather than leaving all the flavor elements in customers’ hands.

The menu revamp of last spring and summer essentially found Piada’s culinary team focused on freshness and seasonality — and also on building a menu item that could be vegan and gluten-free from the ground up.

The seasonality piece and the gluten-free option intersected at one item in particular: the Summer Power Bowl with red quinoa, broccoli, corn, tomato, glazed chickpeas, pickled red onions, marinated zucchini, and harissa-Greek yogurt drizzle. Piada’s menu development team gave a lot of consideration to the vegetables in this bowl in terms of how they were prepared and presented. Roasted cauliflower from a previous bowl was switched out for marinated zucchini, for example, providing a brighter flavor and texture for summer.

“That bowl checked a lot of boxes for us,” said Matthew Harding, director of culinary for The Piada Group. “For Piada, most of the vehicles that deliver flavor have gluten. We wanted something that, from an execution standpoint, wouldn’t be cross-contaminated. So [we built] it from the ground up, and it can be made completely vegan, too.”

New menu items are just the beginning for Piada’s menu masterminds, however. Attention to detail and flavor combinations allow customers to build it themselves, but with a better outcome.

“We [also] changed the format of the menu to make it easier for guests to navigate,” Harding said.

In preparation for that, they amended their ingredient list.

“We wrote down every item they could possibly get on a blackboard,” Harding said. “Then it fell into two [categories]: was it kick-ass or wasn’t it?”

The latter category was removed.

During the past few months of last year and into this year, Piada’s culinary team has focused on amping up signature flavors and ingredients, narrowing in on minutiae such as the girth of the angel hair pasta: They switched it to a thicker noodle to provide sturdier stuff for the majority of guests who grab and go with their orders.

Other changes have included increased portion sizes for chopped salads, “to be more of a meal,” Harding said. Dressing flavor profiles that were a 6 or an 8 on the flavor scale last year, “we made them an 11.”

The meatball recipe was revamped and the sizing changed from one giant meatball to three little ones. The Alfredo sauce became “more Alfredo-y.” Chicken was switched from thigh meat to breast, which their customers prefer, but with fine-tuned seasonings that punched-up the chicken’s grill flavor.

Another chicken option created recently has been dubbed Hellfire Chicken, “so people can get an idea of how hot it is,” Harding said. “People are loving it. It’s been amazing. We’re not changing the format; we’re enhancing it.”

Piada’s roots have always been in fine dining, Harding says, but through a fast-casual lens. That explains why you’ll find calamari and salmon on the menu, not something you’d see just anywhere. And not in Piada’s style, either which is light and tender squid marinated in buttermilk and fried into a little cloud.

“We like calamari over shrimp; it’s not overfished and it doesn’t have a lot of [environmental] issues,” Harding said. “And salmon came in because the CEO loves salmon and he wanted it on chopped salads. It’s funny. It’s the same Atlantic salmon that in a past life, I would’ve charged $22 for, but here it’s $12.”