Oklahoma City-based The Social Order, which franchises Fuzzy’s Taco Shop and operates other brands, got special approval to offer the beverages at its first unit, which is in the city’s popular Bricktown area. Dave’s has 73 units open. 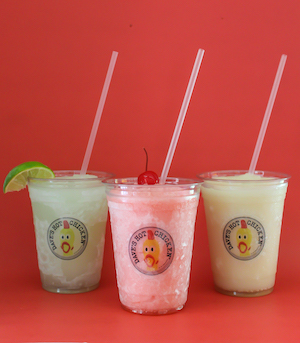 A spokesman of the Pasadena, Calif.-based Dave’s said the offerings — Dave’s Margarita, Whiskey Lemonade and Cherry Limeade Daiquiri — were “just a test.”

“Because of the location and franchisee’s experience,” the spokesperson said, “they approved it. If it goes well, it may roll out to other high-traffic/entertainment locations.” Those might include the Vegas Strip.

A spokesperson for The Social Order said Brian Bogert, the Oklahoma franchise group’s founding partner, flew out to Los Angeles to pitch the cocktail to the Dave’s team and got them approved for the location.

The Social Order, which franchises Fuzzy’s, also owns and operates its own The Jones Assembly and the fast-casual Spark. It’s agreement with Dave’s calls for eight restaurants in the Oklahoma City area.

Bogert said in a statement that “though it’s a simple menu, Dave’s serves the highest quality, Halal certified chicken with sides like housemade kale slaw that pack a flavorful punch and prove they’ve mastered the art of simplicity.”

Dave’s started as a parking lot pop-up in the Los Angeles area in 2017. Maintaining the design of its first brick-and-mortar location, Dave’s worked closely with The Social Order team throughout the construction process.

“We can’t wait to see the look on our guests’ faces when they walk through the door for the first time,” said Korey Allen, Dave’s Hot Chicken partner. “The Social Order has operated franchises for years, and we’ve never had such a creative and precise experience as we’ve had with the Dave’s team.”

The Greater Oklahoma City Chamber will conduct a ribbon cutting ceremony at Dave’s Hot Chicken on Friday, Aug. 5, from 9 a.m. to 10 a.m. The event is open to the public.