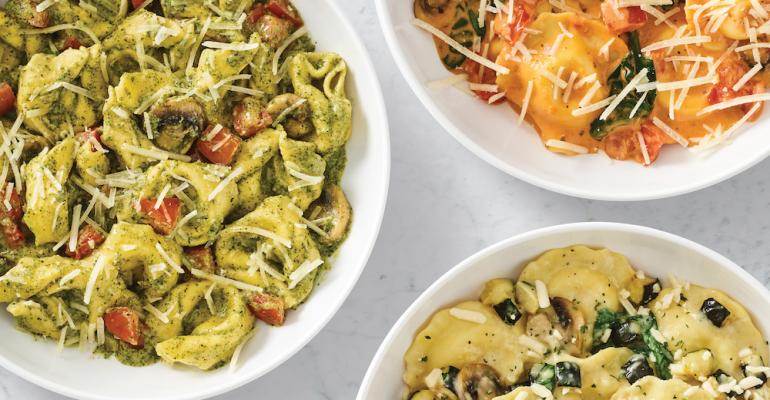 Noodles & Company to roll out tortelloni systemwide this quarter

A mix of healthful and indulgent items, familiar flavors and adventurous ones, have put Noodles & Company in good stead to grow in the coming year, Dave Boennighausen, CEO of the fast-casual chain, told investors Thursday in its first-quarter earnings call that saw same-store sales grow by 10.5%, surpassing the guidance of mid- to high single digits anticipated for the quarter ended March 30.

He said that healthy alternatives, such as the chain’s lower-carbohydrate noodles made out of zucchini or cauliflower-wheat flour blends, account for 14% of sales, “a significant increase of just a few years ago.”

Balancing out that demand for those items is the success of stuffed pasta in the form of tortelloni, which the chain started testing last December, and which Boennighausen said was the most successful test in the 17 years he has been with the company.

He added that stuffed pasta has long been the most requested innovation at the 448-unit chain.

“We're extremely excited to meet that request with our three cheese tortellini with specialty ingredients like caramelized onions and a blend of ricotta, mozzarella and Parmesan cheeses,” he said. “During the past few months we’ve been optimizing the offering, operational procedures and marketing strategy for tortelloni, and we will be introducing it nationwide later in Q2.

Chief financial officer Carl Lukach told Nation’s Restaurant News after the call that the more healthful options and the indulgent ones don’t just respond to consumers’ different need states, but also to different aspects of the chain’s business.

“The healthy options have been a strategy of bringing in new guests and eliminating the veto vote,” Lukach said. “Tortelloni will get guests to come in more because of its craveability.”

He added that, although the food cost of the tortelloni will be higher, they also plan to charge a premium for it, so the gross profit will be higher than other items.

Lukach emphasized that sales at the chain improved over the course of the quarter.

“Where we’re most encouraged by is we saw the momentum build. … The last month of that quarter is where we really saw a lot of strength on the sales side,” he said, adding that profit margins for March 18%, indicating that the chain’s goal of a 20% margin by 2024 was in reach.

For the quarter as a whole, margins were 13.6%, which was an increase of 2.9 percentage points over the first quarter of 2020.

Digital sales declined to 57% of total sales, down from 63% in the previous quarter, but that was because more dining rooms had opened and sales for dine-in guests had increased. On a dollar basis, digital sales increased and about half of them were takeout and half were delivery.

The bulk of that delivery was via third-party providers, which affect profit, but Boennighausen emphasized that they helped increase brand awareness, especially in new markets.

Six company-owned restaurants closed during the quarter and it expects one more restaurant to close this year.

As of the end of the quarter, there were 372 company-owned Noodles & Company restaurants and 76 franchised locations.