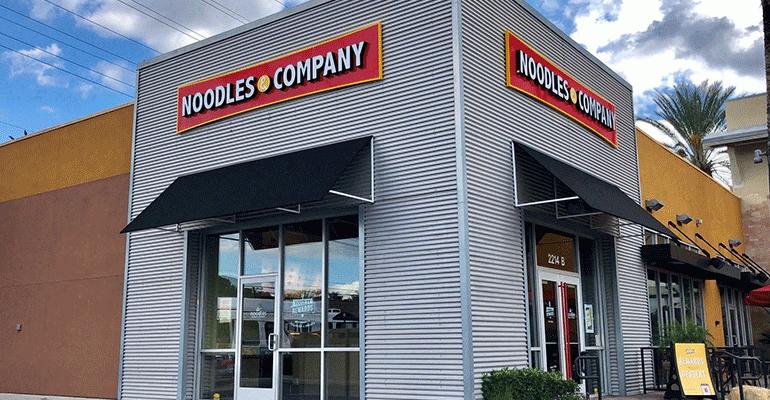 Noodles & Company on Wednesday announced a number of new benefits for its employees including stock for qualifying general managers, reimbursement for expenses related to immigration processes and diversity & inclusion initiatives.

Noodles also announced a General Manager Equity Partner Program, which will allow those general managers at its 360 corporate owned restaurants who meet specific short-term and long-term performance objectives to receive $50,000 in restricted stock units three years after entering the program.

In an initiative called Noodles Balance Bucks, employees ranked as assistant general managers and above can be reimbursed for up to $625 for expenses “that directly tie to their mental, financial and physical wellbeing.” Reimbursable expenses include gym membership, pet adoption and cleaning services, among others.

The chain has also committed to hosting quarterly live and in-person mental health workshops “focused on equipping leaders with the tools they need to take care of themselves and their teams.”

Noodles is promoting these benefits as part of its new Uncommon Goodness branding initiative, which also will include hiring “Uncommon Goodness Ambassadors who are tasked with doing uncommonly good things for Noodles guests in-restaurant, digitally on social media and through in-person activations within their communities.”

“Through ‘Uncommon Goodness,’ Noodles is bringing its purpose to life by elevating the uncommon goodness that has been core to the brand for more than 25 years,” he said. “From how we treat our team members and create a unique guest experience to how we carefully select ingredients and positively impact the communities we serve, Noodles infuses uncommon goodness into everything we do.“

Chief marketing officer Stacey Pool said in a press release announcing the initiative that it “encompasses everything we stand for as a company.”

“As we introduce Uncommon Goodness, our mission and values remain the same: to nourish and inspire every team member, guest, and community we serve,” she said. “The positioning puts into words what has always been innate to our brand while strengthening the emotional connection that our team members, guests, and communities already have with us."

She added that the chain was going to launch a new media campaign introducing “Noodles’ Biggest Fan, an uncommonly delightful and quirky guest who embodies why our brand is so unique and unexpected. And this is just the beginning — you will see Uncommon Goodness guide the way we behave as a company as we infuse even more Uncommon Goodness into everything we do.”

A company spokesperson said the marketing campaign would initially be launched via social media and on television spots in Chicago and Denver.

This story has been updated with information about where the Noodles' Biggest Fan marketing campaign would be launched, as well as to clarify that the General Manager Equity Program is only available at corporate restaurants.
TAGS: Marketing People
0 comments
Hide comments
Related
Sponsored