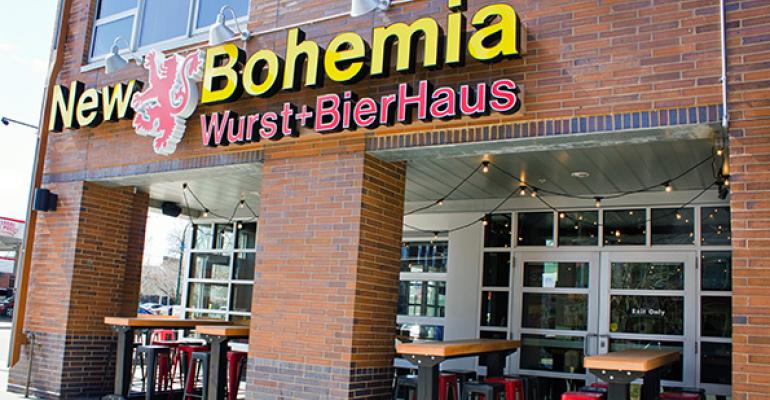 Micro chains are taking off

New Bohemia Wurst & Bier House is a seven-unit, Minneapolis-based fast-casual chain that specializes in, well, sausages and beer. Its menu is filled with interesting sausage, like Rattlesnake Rabbit Jalapeno and Louisiana Alligator Bayou. It has more craft beer selections than you can count, and customers play shuffleboard and shoot hockey pucks into miniature goals.

The concept is also killing it.

“All the stores are up significantly this year,” chief operating officer Brian Ingram told me. “Our Mankato, [Minn.,] store is up 50 percent.”

In an era when consumers are looking for more local options, small “micro” chains with three to 19 units, such as New Bohemia, are thriving.

“Micro chains are coming onto the scene with a new point of view,” said Annie Roberts, vice president of SupplyTrack at NPD. “They’re really honing in on great food. They have a specific cuisine type and quality ingredients, and consumers like it.”

Essentially, micro chains are independent restaurants that are so successful they graduate to chain status by opening a third location. And their success in recent years has had a large impact on the restaurant business — micro chains are getting a huge amount of investment dollars from private-equity groups and other investors.

Their growth could also help explain why restaurant chain same-store sales are falling, even as independents aren’t exactly thriving.

Questions about the state of the independent restaurant have grown recently as large chains’ same-store sales took a dive in 2016 and into 2017. Same-store sales fell 1 percent in May, according to Black Box Intelligence, and traffic dropped 3 percent.

Theoretically, a lot of this is going to independent restaurants that are closer to consumers and have more innovative menus.

The problem, however, is that evidence suggests independents aren’t doing well, either.

According to NPD, traffic at independents fell 3 percent in the first quarter.

Roberts explained the problem this way: The truly successful independent restaurants are expanding and graduating to chain status.

“They go from independent and move into micro chain,” she said.

Those that are left are more likely to be the less successful independents that don’t resonate with customers enough to expand.

NPD analyzed the Chicago market. It found that in the city of Chicago, independent operators closed 4 percent of locations, while micro chains grew by 1 percent, and small chains grew by 2 percent.

Sales data for micro chains isn’t available, and traffic was flat at small chains with 99 or fewer locations, according to NPD.

But many are performing well as they generate more buzz in their local markets and add new locations. And many of these chains get investment dollars that help them grow beyond their micro status, continuing their evolution.

New Bohemia, for instance, is about to add its eighth location. And the company is looking outside of Minnesota, with its eyes on Milwaukee.

“Our sales at our new St. Paul location are doing three to four times what we projected it would do,” Ingram said. “We’re really focused on being this great craft beer hall. You’ve got to be more than just a place where you can get great food and great drinks.”