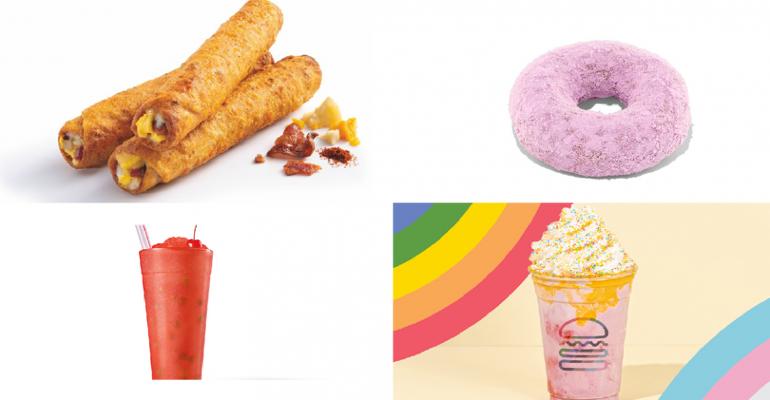 Chicken wings are hard to come by these days as demand for them has gone up during the pandemic. Smokey Bones has come up with the unusual solution of adding more wings to their menu. Another option would have been to switch to “boneless wings,” which are made from chicken breast, “But can a joint called Smokey Bones really do that? Nope,” the chain says in its promotional material. Instead, it’s adding less value-added whole wings as another guest option, presumably allowing the chain to finesse supply issues.

Chester’s Chicken, meanwhile, is adding new breast options in the form of a Buffalo sandwich and Buffalo bites. Islands Restaurants has several new chicken sandwich options on its new summertime menu and the current Weekly Taco Feature at Velvet Taco has breaded and fried tenders.

Dickey’s Barbecue Pit has a new brownie with Snickers pieces in it, Dunkin’ has doughnuts dusted in berry powder and Lion’s Choice has new frozen custard sandwiches.

Sonic Drive-In has boba-style Bursting Bubbles available in its drinks for the summer and Shake Shack is celebrating LGBTQ Pride month in June with a rainbow shake.

O’Charley’s Restaurant & Bar has a bunch of new summertime options, including a couple of pink cocktails, Pie Five has meatless meatballs for its pizza, Pizza Inn has new stuffed crust and 7-Eleven has breakfast taquitos that are available 24/7.