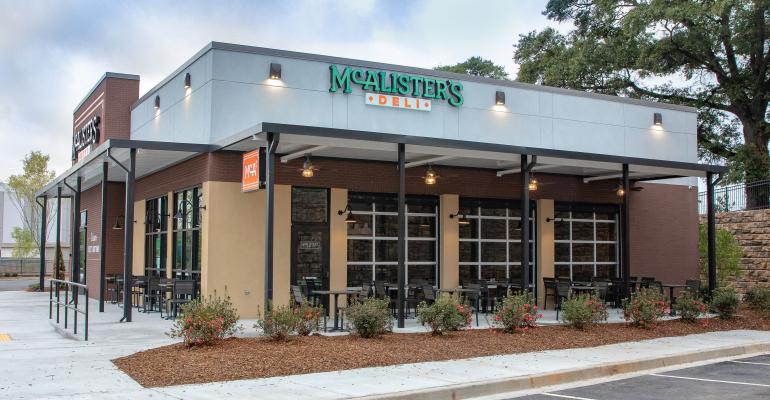 McAlister’s Deli, a leading fast-casual restaurant chain known for its genuine hospitality, sandwiches, spuds, soups and McAlister’s Famous Sweet Tea™, announced today it has opened its 500th restaurant west of Nashville in Dickson, Tennessee. Achieving this milestone is the latest example of the brand’s growth momentum in 2021. McAlister’s has opened 22 new locations since January and has experienced strong sales putting the chain on track to be a billion-dollar brand by 2024, the first for a restaurant concept within the Focus Brands portfolio, which includes iconic brands like Auntie Anne's®, Carvel®, Cinnabon®, Jamba®, Moe's Southwest Grill®, McAlister's Deli® and Schlotzsky's®, to reach this milestone.

“Over the past 13 years it has been exciting to watch McAlister’s Deli expand its footprint at a rapid pace. Reaching 500 restaurants nationwide is a landmark milestone for the company. The addition of a new prototype in 2018, updated interior design and greater emphasis on consumer accessibility contributed to this achievement,” said Mike Freeman, Chief Brand Officer of McAlister’s Deli. “It’s rewarding to see the investments we’ve made positively impact our growth, and I am proud of our franchisees, corporate team members and each guest who played an integral part in our journey to 500 restaurants.”

Leading the charge to 500 locations is McAlister’s largest franchisee David Blackburn of Southern Rock Restaurants. Blackburn began franchising with McAlister’s in 2011, and the opening of the Dickson restaurant marks Southern Rock’s 95th location, with an additional 38 stores in their pipeline. Since becoming a McAlister’s Deli franchisee, Blackburn has served nine years on the Franchise Advisory Board, three years as the Co-Chair of the Operations Culinary Committee for product and execution development and he is a member of the Brand Strategy committee.

“We’ve been a proud franchisee of McAlister’s Deli for over 10 years and are thrilled to be opening the doors to the brand’s 500th restaurant. The corporate team has consistently provided a high level of support, which has given me confidence to continue growing our portfolio with the fast-casual chain,” said David Blackburn, CEO and Chief Operating Officer of Southern Rock Restaurants. “We look forward to developing more locations in years to come.”

The chain’s accelerated growth has been fueled by the prioritization of enhancing the guest dining experience with improvements to its mobile app and loyalty program, leveraging digital technology to increase the number of service options to make the brand more accessible. McAlister’s launched tableside ordering in early 2021 that allows customers to skip the line and order at their table with the mobile app, creating an even more personalized service experience. Since the launch, participation rates on the mobile app are up seven times from what they were pre-pandemic, ultimately increasing revenue and driving customer loyalty among new and existing guests.

McAlister’s Deli currently has 500 restaurants across 29 states. The brand is continuing with its aggressive expansion and is focusing on adding locations in in Southeast, Midwest and Mid-Atlantic states. For more information about franchise opportunities, call 800-227-8353 or email franchising@mcalistersdeli.com.