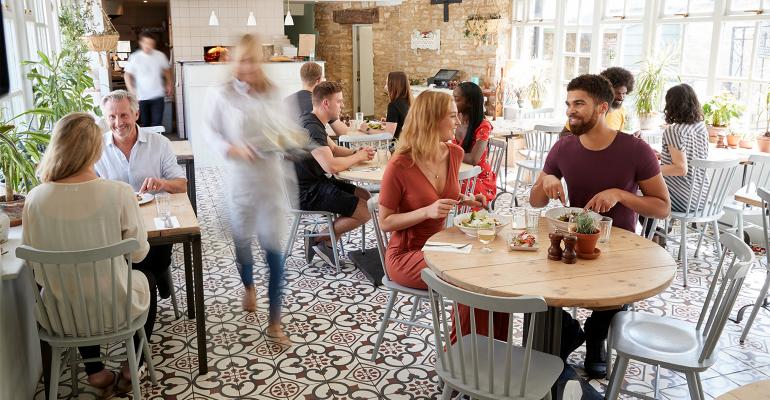 Restaurant sales rebounded solidly during March, proving that February’s stumble was just an anomaly and not a reversal on the industry’s positive sales momentum.

Same-store sales grew 1.2% during March, a 1.9 percentage point improvement from last month’s comp sales decline of 0.7%. Excluding February and its extremely bad weather, every month since June of 2018 has posted positive same-store sales. These insights come from TDn2K’s Black Box Intelligence data, based on weekly restaurant sales from over 31,000 locations representing more than 170 brands and nearly $72 billion in annual sales.

Same-store sales grew 1.0% during the first quarter, which was the fourth consecutive quarter of positive growth for the industry.

“Chain restaurants have a lot to be optimistic about given these latest results,” said Victor Fernandez, vice president of insights and knowledge for TDn2K. “The sector is going through its longest period of sales expansion for comparable stores since 2015.”

Fernandez said there are signs indicating a longer-term recovery.

“March’s strong sales growth did not come at the expense of a soft comparable month from 2018. Last year March sales grew 0.6%. This means same-store sales grew by 1.8% when compared with March of 2017,” he said. “The industry is finally posting consistent positive growth on a two-year basis. Since October, all months have achieved positive two-year sales growth with the exception of February. Before that period, restaurants went through 22 consecutive months in which sales were not able to top where they were two years before.”

There are several factors that seem to be impacting this period of expansion.

From a macroeconomic standpoint, growth has been encouraging in recent quarters. Tight labor markets have been accelerating wage increases and consumers remain optimistic about their conditions. From an industry perspective, net growth in the number of restaurant locations has slowed in recent years, especially among fast-casual and casual-dining chains, TDn2K said. This has undoubtedly helped mitigate the oversupply problem the industry has experienced for the past decade.

In addition, many chains have been embracing and adapting to changing consumer preferences pointing towards off-premise consumption of food as a growing trend and an important source of potential restaurant sales growth. Top performing brands have also recognized there are growth opportunities beyond the traditional lunch and dinner dayparts,” said Fernandez.

As a whole, restaurants have been relying on their guests to spend more than they did a year ago as a key to increasing their same-store sales.

Growth in average check was 3% year-over-year during March. The pace at which guest checks are growing has also been accelerating year-over-year.

On average, guest checks have grown by 3% since the fourth quarter of 2018. By comparison, the average was 2.4% for the first three quarters of last year. This may be a consequence of accelerating wage growth and a consumer that is relatively more confident and willing to spend.

Average spending per guest is crucial because the number of guests keeps declining for chain restaurants. Same-store traffic was down 1.8% during March, while traffic growth for the first quarter of 2019 was down 2%.

The strength in restaurant sales was widespread throughout the industry in March. Most industry segments were able to achieve positive same-store sales growth.

Only two segments, fine dining and family dining, experienced same-store sales decline in March. However, there may be an explanation for their disappointing results. This year, Easter is in April, and in 2018 the holiday fell on the last week of March. Last year’s results benefited from the jump in sales that Easter brings for these segments, while those incremental sales dollars were not yet accounted for in March of this year.

The economy continues to expand at a moderate pace and there are indications the deceleration we have experienced over the past year is stabilizing.

“Consumer confidence remains high and there was a rebound in vehicle sales, signs that the worst may be behind us,” said Joel Naroff, president of Naroff Economic Advisors and TDn2K economist. “When it comes to consumption, though, one concern has unexpectedly arisen: wage growth moderated recently. However, the pressures on compensation remain great given the low unemployment rate and the continued solid hiring. Indeed, additional increases in minimum wages have been announced. The likelihood is that the slowdown in income growth was temporary.”

“The outlook is for continued good income growth the rest of the year, which should translate into solid retail sales and restaurant spending. The only risk to this positive outlook is receding world growth. If the trade issues are not resolved soon, the faltering global expansion would restrain U.S. growth. However, the expectation is that an acceptable trade agreement with China will be announced, removing the greatest risk to U.S. growth.”

Favorable economic conditions may have translated into growing sales for restaurants, but they have also created a labor market in which it is increasingly difficult to keep those restaurants staffed to support those growing sales.

According to People Report data from TDn2K published through the Workforce Index, 50% of restaurant companies expressed increased difficulty in finding and hiring qualified hourly employees during the first quarter of 2019 compared with the previous quarter. Fifty one percent of companies reported increased difficulty in finding qualified managers.

“It is important to keep in mind these recruiting difficulty numbers are compounding rapidly. The percentage of companies reporting increased challenges hiring employees and managers has been as high as 70% in recent quarters. So what most restaurants are really saying is, it’s getting harder to find enough qualified employees today compared with the previous quarter, even though it was pretty hard to find them back then too,” explained Fernandez.

One of the key factors behind these rising staffing difficulties is the industry’s need to constantly replace so many of its employees due to historically high turnover rates. Rolling 12-month turnover rates increased once again for restaurant managers and hourly employees during February, according to People Report’s latest numbers.

Fernandez concluded, “The importance of service cannot be overstated as a key differentiating factor for top-performing restaurant brands per ongoing TDn2K analysis. We constantly see a strong pattern in which adequate staffing enables a service experience that translates into improved sales and traffic.”