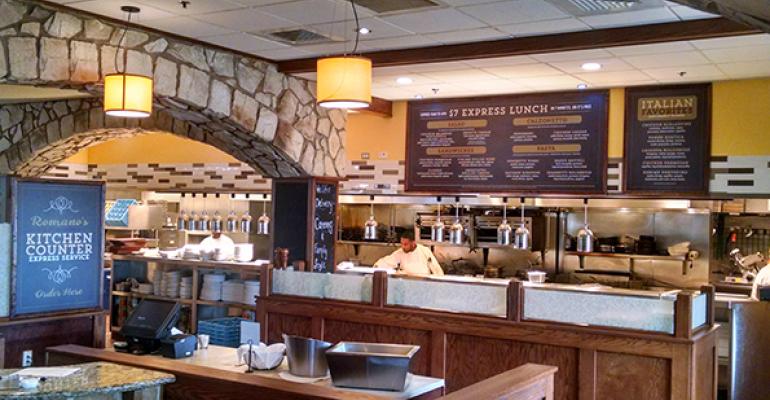 Romano&rsquo;s Kitchen Counter is available inside 131 of the chain&rsquo;s casual-dining restaurants.

“Essentially, what we are doing is taking one of the next-wave casual-dining brands from 26 years ago and taking it to what we think is a head-of-the-class of the fast-casual movement,” said John Gilbert, president of Macaroni Grill. “It’s a fast casual inside a Macaroni Grill. It looks and works just like any of the popular fast-casual restaurants.”

Ignite president and chief executive Ray Blanchette said a mature brand like Macaroni Grill, which was founded in 1988, faces a challenge as its clientele ages to “resurrect or reinvent or rejuvenate” the restaurant. The Kitchen Counter gives Macaroni Grill a better chance to catch Millennials and lunch business, he said.

“We don't make any noise at lunch,” Blanchette said. “Now we have an opportunity to make a noise.”

The menu offers a mix of 10 to 12 items, including sandwiches, salads and pasta, that are ready “in seven minutes or it’s free,” Gilbert said, and dayparts may be added “over time.”

Nearly all Macaroni Grill restaurants have an existing counter near the entrance, which is the area being converted to the Kitchen Counter, Gilbert said. “Typically, it’s to the right-hand side as you walk into the restaurant,” he said. “When Phil Romano created this brand, he had a lot of vision. The interior still feels very contemporary.”

Gilbert said he always saw the counter as “an underutilized asset.” That has become the queuing area for the express lunch, and a cash register is placed at the end of the counter, where a cashier takes orders and accepts payments.

After ordering, customers receive a number on a stand and find a seat. Orders are delivered to customers within an average of three and half minutes, Gilbert said.

“The customer chooses where they want to sit,” he said, and the brand has found that they “kind of disperse themselves throughout the dining room. We have no issue with that.”

Servers assigned to those stations help customers if they need anything. “They’ve already paid, so the food is delivered to them and, as soon as they are done, they leave,” Gilbert said.

The Kitchen Counter also has a strong carryout component, Gilbert said, “which is what you expect at lunch.” To-go orders in the express tests have been “north of 20 [percent] to 30 percent” of total orders, he said, which is higher than the traditional to-go percentage of 10 percent overall.

In a call Wednesday with analysts regarding third-quarter earnings, Blanchette called the Kitchen Counter concept a “dramatic change.”

“The augmented service model takes advantage of the counter and display kitchen that already exists in over 75 percent of our locations,” Blanchette said. “So, as a result, implementation expense is very low, and less than $2,500 a unit.”

Blanchette said the new format is “taking pains not to divorce our current customers, noting that counter service is just a lunch option. "Traditional full-service dining continues to be available at every location, every meal period,” he said.

In addition to Macaroni Grill, Ignite owns and operates 138 Joe’s Crab Shack units and 21 Brick House Tavern + Tap locations, for a total of 334 restaurants at the end of the quarter.