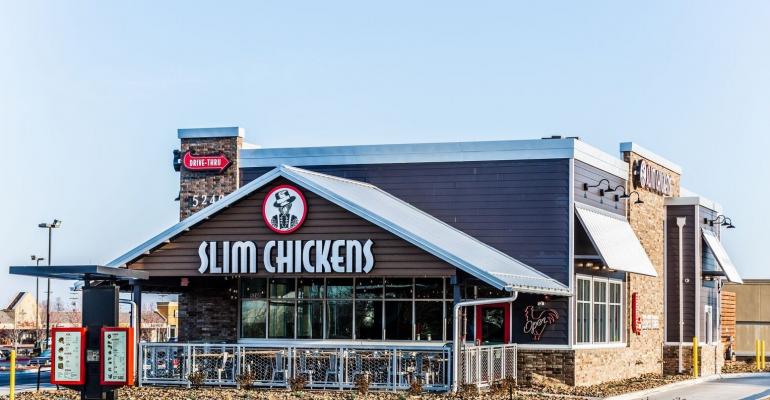 Slim Chickens restaurants include porch dining, since community eating is an important part of the brand. To accommodate Arizona’s weather, Jacobs is enclosing the porch in high-end sliding glass doors to open in pleasant weather with misters and fans and shut in the summer, cooling with air conditioning.
News>Fast Casual

Company earned national burger corp.’s 2014 franchisee of the year and was exclusively recruited by Slim Chickens for their shared business values and dedication to excellence in operations

The executives of a longstanding Phoenix company, Barnett Management Company, have signed an agreement with fast-growing Slim Chickens to launch 32 restaurants in Arizona over 10 years as their exclusive operator in the state.

Barnett Management Company plans to open the first location in the West Valley, with potential sites being near Loop 101 and Northern Avenue, by the end of 2022 and then open two to three a year over 10 years across the state including Flagstaff, Tucson and Yuma. They are seeking 1-2 acre lots to accommodate porch dining and three-lane drive-throughs near freeways in high traffic areas. The restaurants, which feature chicken tenders, chicken sandwiches, 17 house dipping sauces and even fried okra and pickles, will be open seven days a week.

Barnett Management Company, which launched in 1979 with one Burger King location in Phoenix, currently owns more than 50 Burger King locations in Arizona and was the recipient of Burger King Corp.’s national Franchisee of the Year Award in 2014. As the award prize, Owner and CEO Tom Barnett won a Corvette and Rolex watch, which he promptly sold to give his managers bonuses. Barnett Management partners also chipped in their own money into the cash pool to create a total of $120,000 in employee bonuses. News of Barnett converting his grand prize into cash and rewarding his employees spread quickly, turning into viral news coverage from coast to coast. Sample coverage: Time, People, ABC News, Grubstreet, and the Arizona Republic.

The Arizona Slim Chickens restaurants will be led by Barnett and Shane Jacobs, who is a partner at Barnett Management and the new restaurant endeavor, called AZ Slims.

“We believe strongly in investing in our employees and treating people well,” Barnett said. “In our 42 years of operating Burger Kings in Arizona, all of our managers started at lower positions and worked their way up. Everyone pitches in and cares for one another. That philosophy has brought us great success and we expect Slim Chickens in Arizona to do very well with that approach.”

Arkansas-based Slim Chickens has a strategic multi-unit franchise growth initiative. The “better-chicken” brand has opened more than 140 locations across the United States and the United Kingdom. With more than 650 locations in development, the brand’s momentum shows no signs of slowing down.

“Slim Chickens is one of the nation’s fastest growing restaurant brands,” said Jackie Lobdell, vice president of franchise development at Slim Chickens. “I brought this opportunity to Tom Barnett because he came highly recommended as an exceptional multi-unit operator. I could not be more excited about our partnership and expanding our brand in Arizona with the Barnett team!”

Jacobs, who has 20 years of experience in QSR and serves on several national Burger King Corp. boards, is planning innovations for the Arizona locations.

Slim Chickens restaurants include porch dining, since community eating is an important part of the brand. To accommodate Arizona’s weather, Jacobs is enclosing the porch in high-end sliding glass doors to open in pleasant weather with misters and fans and shut in the summer, cooling with air conditioning. The interiors will feature modern design with hardwood floors.

Jacobs also is planning to add a third lane in the drive-through, which he is calling an “escape lane.” For drive-through customers with a small order, a runner will bring their food to the car and then they can quickly exit the drive-through without having to wait in line. The drive-throughs also will feature a permanent covering attached to the building wide enough to provide shade for six to eight cars with misters and lights. Several employees will work in the drive-through lines to ensure they move quickly.

“There are many other quick service restaurants that want to offer innovations, such as an ‘escape lane,’ but retrofitting an existing building to add another lane is expensive. We will open Arizona’s Slim Chickens with these improvements from day one,” Jacobs said. “A three-lane drive-through requires a high volume of traffic and we are confident Arizona customers will generate that demand.”

“We know other Burger King operators and they all speak highly of Tom and his team. When we heard the story surrounding his Franchisee of the Year Award, we were not the least bit surprised. He is truly a servant leader,” said Sam Rothschild, chief operating officer and partner in Slim Chickens Development Company. “Earlier this year, we walked into a Burger King restaurant in Arizona with Tom and a long-time employee greeted him with a hug – it is extremely rare for a restaurant operator with more than 50 locations to know his employees at that level. We continue to be impressed with Tom and Shane’s approach to working with people. It will lead them to great success with Slim Chickens.”

Barnett names three traits that are essential in a successful employee: character, capacity and attitude. He identifies talent and then sets them free to bloom. As a result, the average tenure of their Burger King general managers is 10 years, higher than many others in the industry.

Jacobs began his Burger King career as a 16 year old working in the kitchen. He became a partner in the business during his 10th year at the company. Barnett calls him a “master of the industry” because his technology expertise has been critical to Barnett Management’s information systems and he also works well with people.

In July 2021, Jacobs and other executives traveled to Slim Chickens’ headquarters in Fayetteville, Ark. to work as crew members at a restaurant for a week. They will return for six weeks of additional training prior to opening their first location in Arizona. At that time, Slim Chickens’ headquarters will fly a crew of long-term employees to assist with the first Arizona grand opening for a week prior and for a week after, or until the local team feels comfortable with the operations.

Barnett Management Company is a family owned and operated Burger King franchise with 50+ restaurants in Arizona. The company has been in business since 1979, when Tom Barnett opened his first Burger King Restaurant. We pride ourselves on serving guests hot, fresh food, quickly, and in a clean and friendly environment. We are always seeking exceptional people to help staff our restaurants and to grow their careers through our ongoing growth. Visit Barnett Management Company.

Slim Chickens, a leading fast casual franchise which features dine-in and drive-through in the “better-chicken” segment, opened in 2003 in Fayetteville, Arkansas. Offering high-quality food with a focus on fresh, delicious ingredients, the brand prides itself on its southern flair and commitment to hospitality, all in a fast-casual setting. Food is cooked to order, and the differentiated menu features chicken tenders, fresh salads, sandwiches, chicken and waffles, chicken wings and unique side items, alongside 17 house-made dipping sauces.

Today, there are more than 140 Slim Chickens locations open and 650 restaurants in development. The brand, which recently launched a strategic multi-unit franchise growth initiative to reach 700 units in 10 years, is targeting qualified and experienced multi-unit groups to develop in dynamic markets across the country.