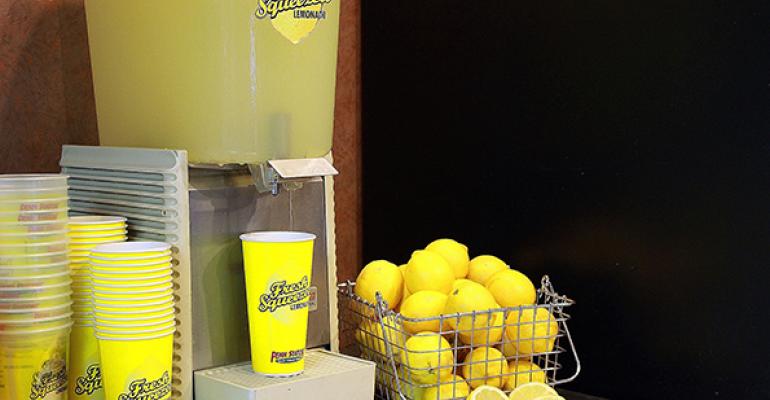 <p>Penn Station East Coast Subs is promoting its lemonade this summer by giving it away for free at locations where the temperature outside is 100 degrees Fahrenheit or higher.</p>
Menu>Beverage Trends

Drink’s popularity on the rise nationwide, according to NPD Group

It can be a struggle to get customers to upgrade their beverage choice from tap water, but as soda sales continue to slide, lemonade offers a bright spot on the drink horizon.

Each of Penn Station’s locations goes through about five cases of lemons a week, squeezing them in an old-fashioned hand juicer to make lemonade, which they sell at a premium, of $2.29 for 20 ounces, compared with $1.79 for a soda. Restaurants also display the lemonade separately from the sodas, and squeeze the lemons where customers can watch the lemonade being made, to promote its freshness.

Dunaway credits those freshness cues with the increase in lemonade sales, but lemonade’s popularity is also growing nationally, according to the NPD Group. The consumer research firm found that 1.4 billion servings of lemonade were ordered in the year ended April 30, 2015, a 3-percent increase from the previous year.

This summer, Penn Station is promoting its lemonade by giving it away for free at locations where the temperature outside is 100 degrees Fahrenheit or higher.

“We don’t want to coupon or discount our food, but we do want to thank customers and reward them and say we appreciate their business,” Dunaway said.

The Daily, a pub in New York City, is also giving away lemonade this summer as part of its Boozy Lemonade Hour promotion. From Monday through Friday, from 5pm to 7pm, head bartender Nacho Jimenez is making a variety of lemonades that they can drink for free, or add a shot of alcohol — gin, vodka, tequila or Irish whiskey — for $7 to $8.

“The idea is to keep it really fresh, simple and delicious,” Jimenez said.

“Lemonade is something standard that you have in your neighborhood — kids selling it and making a buck or two. We’re really a neighborhood bar, so the idea is to be the neighborhood lemonade stand,” he said.

Large and small restaurant chains have noticed the growing popularity of lemonade and added variations on the beverage to their menus.

Although many of these additions have been made with the approach of summer, lemonade sales vary only marginally depending on the season. According to NPD, 2.6 percent of summertime foodservice orders include lemonade, while during the rest of the year that figure is between 2.3 percent and 2.4 percent.

In March, 1,700-unit Chick-fil-A, which has long offered a popular lemonade, started combining the beverage with its vanilla soft serve for a treat it calls Frosted Lemonade. The permanent menu addition is priced at $2.69.

Native Foods Café, a 26-unit vegan chain based in Chicago, added strawberry lemonade as a limited-time offer from April through July. The beverage is made with lemons, sugar, lavender and sea salt, and is priced at $2.79.

In April, Dunkin’ Donuts introduced a Frozen Arnold Palmer Coolatta, a frozen blend of iced tea and lemonade, for a suggested price of $2.69 for a small. The beverage is available at its more than 7,600 domestic locations for an unspecified limited time.

In May, KFC added Dole Classic Lemonade to its permanent menu. The beverage is available in regular or strawberry flavors, and is priced at $1.99.

Also in May, 1,200-unit Cinnabon brought back its Wild Berry Medley, a combination of strawberries, raspberries, blackberries and blueberries, that can be added to its frozen lemonade, as well as its rolls. The beverage is available through July 20 at a suggested price of $3.99 for a small.

Auntie Anne’s has brought back its Peach Lemonade Mixer to its more than 1,000 domestic locations for the summer, and also has introduced new Limeade and Cherry Limeade Mixers. The frozen drinks are available for an average price of $2.69, and will be offered through Aug. 16.

Correction: June 2, 2015  An earlier version of this story misstated details of Penn Station's lemonade giveaway. The chain will give away lemonade when the outside temperature at a location is 100 degrees Fahrenheit or higher.