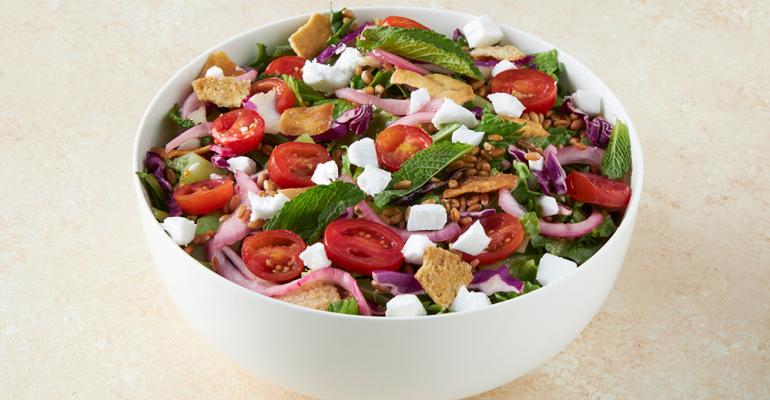 The salad, dubbed the Zero Foodprint Salad, introduces a new vegan cheese to the Just Salad menu for the first time. Violife 100% vegan “Just Like Feta” cheese alternative is the highlighted ingredient, but the salad also contains fresh mint, wheat berries, pickled red onions, pita chips and grape tomatoes on a base of arugula, red cabbage, and romaine lettuce, along with a yogurt cucumber dressing.

The yogurt in the dressing is sourced from Stonyfield Organic, a leader in the regenerative movement and Zero Foodprint collaborator.

Regenerative farming is, according to research group Regeneration International, a series of farming and grazing practices that, among other benefits, reverses climate change by rebuilding soil organic matter and restoring degraded soil biodiversity – resulting in both carbon drawdown and improving the water cycle.

“After learning about the regenerative farming projects that Zero Foodprint has already funded, we knew we wanted to support ZFP’s expansion,” Sandra Noonan, chief sustainability officer at Just Salad, said in a statement. “So, we created the Zero Foodprint Salad to generate funds for ZFP’s grant program. But this is only a first step -- we seek to source more ingredients from regenerative farms as these practices scale up.”

For each Zero Foodprint Salad sold, 15% of sales will be donated to ZFP.

Just Salad introduced carbon labeling on its salads in 2020 and only has one animal-based protein left on its menu, chicken. Everything else is plant-based, except non-vegan cheeses and eggs.

“ZFP’s Restore grants represent real-world climate action: converting greenhouse gases to soil carbon, boosting climate resilience, and addressing food system inequities that have been exacerbated by the climate crisis,” Myint said in a statement. “We first approached Just Salad about a partnership because of their innovative work on carbon labeling, and we’re happy they are putting their brand behind the cause of regenerative agriculture.”

The donations for each Zero Footprint Salad from Just Salad will go directly toward these grants.

Since the program began, 30 farms in California have been awarded the grants. Combined, the 30 farms cover 3,787 acres and sequester an estimated 15,865 metric tons of greenhouse gases, according to the company.

ZFP is expanding to the northeastern U.S. Farms qualifying for Zero Foodprint’s northeast grant program will be announced by Zero Foodprint, Just Salad, and other regional stakeholders by the fourth quarter of 2021.