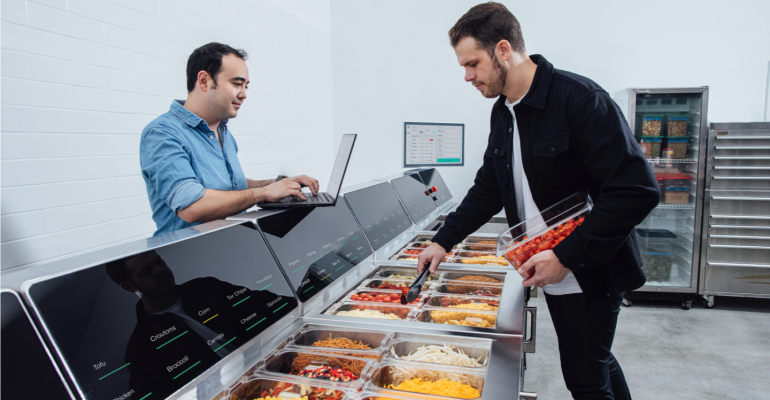 Hyphen’s automated Makeline is next level in restaurant robotics

One of the first investments by Chipotle Mexican Grill’s new Cultivate Next venture fund showcases a next-level shift in the rapidly growing world of restaurant robotics.

Chipotle led a round of funding for the San Jose, Calif.-based tech company Hyphen. Founded in 2020, it’s a company that has developed a robotic makeline that essentially allows restaurants to double their production capacity in the same amount of space.

Here’s how it works: Hyphen’s system is basically two makelines in one.

There’s the “analog” line on the top of the counter, like what you’d see at Chipotle, Subway or other build-your-meal concepts, explains Stephen Klein, Hyphen’s co-founder and CEO, in an interview.

Below the counter, however, is an autonomous makeline that can fulfill digital orders as they come in, with dishes moving down a conveyor belt, with 99% accuracy. Hyphen says the robotic makeline can produce more than 350 meals in an hour.

The system allows restaurant operators to add significantly to the volume of throughput without needing additional space in the kitchen, or adding a satellite location — or even additional labor.

Klein, however, notes that the Hyphen Makeline can be adjusted to specific concept needs, where the robotic line might take on some human tasks, but not all. “We want to augment labor, not replace it,” he said.

The Hyphen Makeline also has other features for ease of service. A dashboard lets human handlers know when to refill certain ingredients, for example.

“It’s like a fuel gauge on your car,” said Klein. “It tells you how many meals until you’re out of cherry tomatoes, or whatever.”

The potential benefit of the technology is clear for a company like Chipotle, which pioneered the idea of separate back-of-the-house-only makelines to handle the large volume of digital and delivery orders.

Chipotle officials haven’t said whether they might test use of the technology. In a statement, Curt Garner, the chain’s chief technology officer, said, “We are always seeking innovation solutions to improve the employee experience and remove friction in restaurants.”

Klein said the Hyphen Makeline is already in use “out in the wild” by some restaurants, but he can’t reveal where yet (except that it’s not Chipotle).

The company first started in Los Angeles. It began originally as Ono Food Co., a robotics-powered food truck designed to offer healthy smoothies. Klein, who had experience with Instacart and the robotic coffeeshop Café X in San Francisco, partnered with Daniel Fukuba, who worked in robotic assembly at SpaceX and Zume Pizza.

“We were automation maximalists,” said Klein.

But, after COVID hit, the partners rethought the plan. The technology could move from truck to small restaurant space. “We decided it’s better to build the picks and shovels than dig for gold.”

Including the $18 million round led by Chipotle, Hyphen has now raised about $40 million.

Klein said the fundraising effort was oversubscribed and they had to turn some investors away.

The funding will allow Hyphen to accelerate their hiring and production, Klein said.

Though tech companies are showing signs of a cooling market — perhaps signaling a coming recession, some say — Klein contends demand for automation will remain strong as the restaurant industry struggles with labor challenges and the need to produce more in the way of sales out of the same or smaller boxes.

Customers, fundamentally, don’t care if their meal was made by human or robotic hands, he said.

“If you’re a customer … you don’t really care about who’s making your food as long as it’s fresh, fast and consistent,” he said.