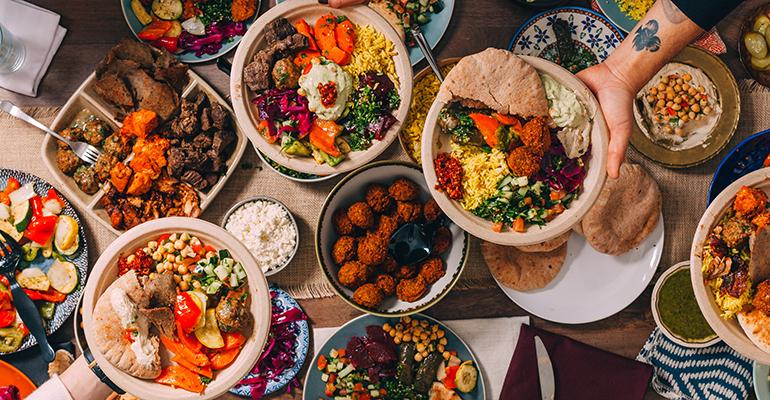 The Hummus and Pita Co. is celebrating its 10th anniversary with a bang.
News>Fast Casual

“Hummus and pita today is like, bagels and cream cheese or bread and butter. Everyone has it in their house,” Dave Pesso, co-founder of The Hummus and Pita Co., told Nation’s Restaurant News.

For almost 10 years – the brand celebrates its decade-aversary in February – The Hummus and Pita Co. has been offering the ubiquitous ingredient to New Yorkers, but it’s looking to expand across the country this year.

The New York City chain has five units in New York and one flagship location in Los Angeles set to open before the end of this year, part of a bi-coastal expansion plan.

The fast-casual brand just signed a three-unit deal in Columbus, Ohio, with a family that owns 10 7-Elevens and four Dairy Queens. The Los Angeles location is operated by someone who also operates a group of Jersey Mike’s units.

“Little by little now we're going to start dipping back into the pool of franchising, but being very, very tricky because it's like, a marriage. It’s a partnership forever. It's someone that you're lending your name to,” he said.

So, what is Pesso looking for in a future franchisee?

“We want a person … that has the experience that happened knowledge and knows what it takes to make the brand special because if we don't do that, it's going to hurt us,” he said. “It's going to blow up in our face and backfire and then it'll dilute our brand and that's not what we're in for.”

The food at The Hummus and Pita Co. is healthful and Mediterranean – and mostly vegan – and features the brand’s new signature hummus milkshake.

“Our customers don't come to us necessarily because we're Mediterranean, but they come because we're healthy, good, delicious, fresh food. And you know, we give it the homemade touch,” he said.

The milkshake is called the Chickpea Chiller and is made from hummus rather than ice cream, which allows it to be nutrient dense and full of vitamins and minerals. The “shake” is available in six flavors year-round and three seasonal flavors.

The chain, before the viral milkshake, became known for its wild flavors of hummus including chocolate hummus and cookie dough hummus.

The brand also entered the consumer-packaged goods market during the pandemic. It started selling its own hummus, which is made over the course of three days.

“Most people in the country when they eat hummus, they eat store brand hummus, which is full of chemicals and preservatives,” he said.

Selling the hummus locally in New York City and shipping it nationally were two separate beasts. But the brand partnered with Goldbelly for nationwide distribution almost two years ago and has seen great success in the shipping market since then.