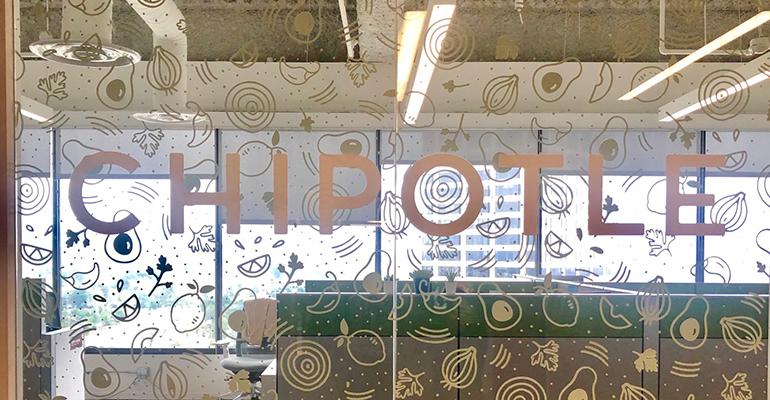 How Chipotle rebooted with fresh leaders and a new California home

Niccol challenged Brandt, who left Taco Bell for Bloomin’ Brands in 2016, to raise the curtain on the fresh-Mex chain, which had lost its way, its confidence and its customers.

“We have to stop being invisible,” Niccol told Brandt, who started as CMO in April 2018 — a month after Niccol became CEO.

Over the past year, Brandt and his team have focused on showcasing the fast-casual burrito chain’s food-with-integrity roots with the “For Real” and “Behind the Foil” campaigns. In February, for example, Brandt brought cameras into the kitchen to show fans on Facebook, via a live stream, how employees chop, dice and cook fresh ingredients.

No microwaves. No can openers. No freezers.

“We were reminding people why they love Chipotle,” Brandt told Nation’s Restaurant News during a recent interview at the chain’s new offices in Newport Beach, Calif.

While Brandt jogs the memories of lapsed consumers, Chief Technology Officer Curt Garner has been working behind the scenes on another Niccol initiative: brand access. 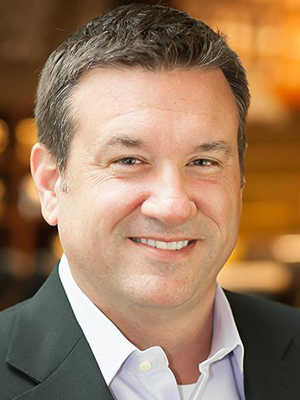 “Friction is the enemy of Chipotle,” Garner, left, said from his 13th floor corner office.

The former Starbucks chief information officer has spent months building the infrastructure needed for seamless digital-ordering systems, while also developing an easy-to-use loyalty program. The latter was unveiled in early March, logging 1 million members in less than a week, thanks to a Millennial-friendly launch campaign that included monetary prizes awarded through the payment app Venmo.

The executive team has reset the brand in other big ways — including the bold decision to move the corporate headquarters from the Rocky Mountains of Denver to the wealthy seaside community of Newport Beach.

During NRN’s visit, the headquarters appeared to be a canvass half painted with tightly packed cubicle workspaces, new hires streaming in and ongoing construction of the main 14th floor office.

“It’s a bit of a startup vibe here,” Brandt said of the new HQ space, which occupies three floors of an 18-story tower overlooking million-dollar homes and crashing waves of the Pacific Ocean. 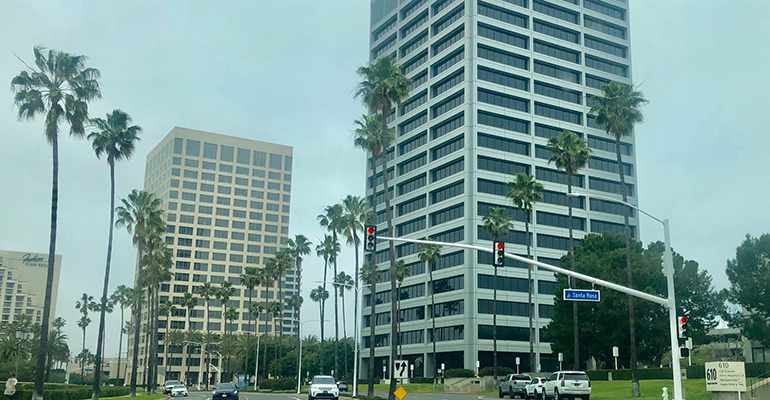 Under the new leadership team, Chipotle is close to restoring the economic success it enjoyed before the late-2015 foodborne illness outbreak sent sales and the share price on a long downward slide.

In February, Chipotle reported its highest same-stores sales growth in six quarters. For the fourth quarter ended Dec. 31, same-store sales were up 6.1%, including a 2% increase in transactions. Digital sales grew a smashing 65.6% during the quarter.

And Wall Street is responding. In early Monday trading, shares hovered around $704 after closing Friday at $710.72. The brand last eclipsed the $700-mark in mid-October 2015, the same month federal health authorities began logging illnesses tied to Chipotle.

“We continue to believe that Chipotle has set the foundation for an economic recovery,” BTIG analyst Peter Saleh said in a recent report.

Brandt said sales are the “ultimate litmus test” to prove initiatives are working.

“You’re seeing us talked about in more places. When that starts to happen, good things start to happen. It’s positive momentum. Chipotle is becoming cool again,” he added.

Before feeling cool, there was misery at Chipotle.

The company’s been on a stomach-churning rollercoaster ride ever since.

Lately, there are fewer dips. The company closed 2018 with same-store sales up 4% compared a decrease of 20.4% in 2016. That year took the brunt of the beating following the food-safety crisis.

Niccol and his team have orchestrated the climb with a simple playbook: give consumers reasons to visit the brand more often with easy-to-use digital platforms and menu innovation.

That is a stark contrast to what had been done before.

“Chipotle would just put up a sign and people would come in because it was cool, it was relevant, it’s the way people want to eat,” Brandt said. “Chipotle, prior to us, did not have a real plan for menu innovation.” 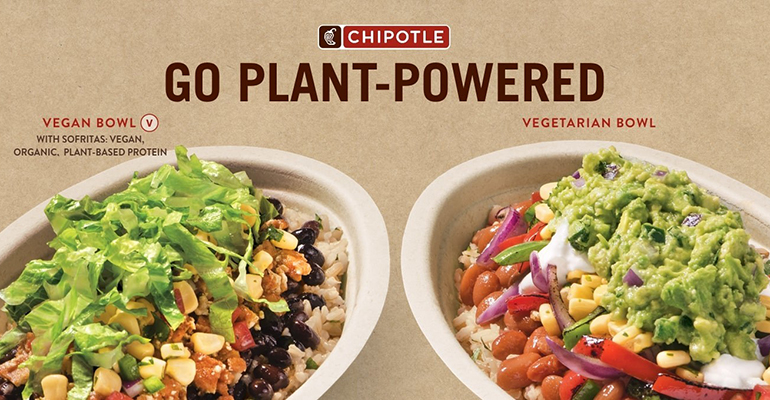 When guest visits tanked back in 2016, the previous leadership initially tried to reinvigorate sales with promotional discounting.

“We were world class at giving away food for nothing,” Brandt said.

That’s not Brandt’s game plan. His team, which includes Taco Bell’s former vice president of digital innovation Tressie Lieberman, is tasked with creating an “agile and innovative culture” at Chipotle.

“If you’re doing your job the same way you did last year, you’re falling behind,” he tells his staff.

A series of major changes include introducing new menu items, many of which will be conceived a few miles up the road at the Chipotle Cultivate Center.  The facility will house the company’s R&D lab and a “university” for employee training.

Until it opens next year, innovation continues in other ways.

This year, the company introduced “Lifestyle” and “Plant-Powered” bowls —entrees made with specific ingredients that match the requirements of trendy diets such as paleo, keto and Whole30.

While they don’t involve new ingredients, the bowls meet the “access” initiative by making it easier for online customers to order without the tedious steps of choosing ingredients one at a time. 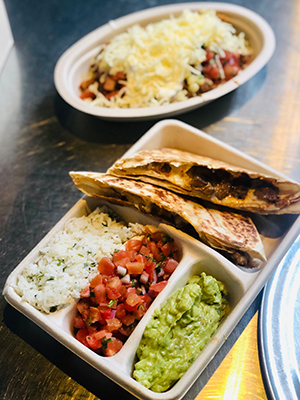 In mid-March, the company began market testing a quesadilla in about 100 restaurants in Cleveland, Indianapolis and Newport Beach. At a restaurant near Chipotle’s headquarters, the quesadilla comes with a choice of three sides and sells for $7.25 to $8.25, depending on the protein.

“Quesadilla is a big idea for Chipotle,” Brandt said.

If it passes the company’s various “stage gate” requirements, Brandt said quesadillas could land on menus nationwide next year.

Why so long? A product must pass certain stress tests before a launch: consumers must like it; the item must “meet financial considerations” (aka profitability); and it must work operationally, Brandt said.

“A good idea that is poorly executed in the field is a real bad idea,” he said.

The company is also redeploying marketing buys, which were regionally focused in the past.

With the “For Real” and “Behind the Foil” campaigns, Brandt is showcasing employees who are passionate about working for a brand with high food standards. The idea came after he visited restaurants during his first weeks on the job.

“I thought this place looks more like a farmers’ market than any restaurant I’ve ever seen,” he said.

Developing modern loyalty and delivery programs have been crucial elements to Chipotle’s turnaround.

Much of the planning started before Niccol’s arrival, led by Garner who came to Chipotle in late 2015 after spending 17 years in various IT roles at Starbucks, including serving as CIO from 2012 to 2015. 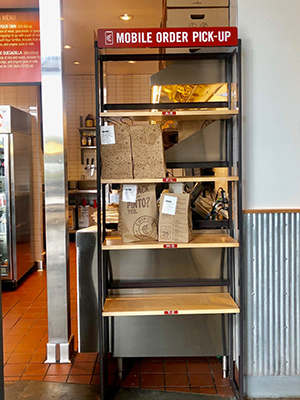 Garner, who led the team that developed the Starbucks mobile order and pay app, said he was attracted to Chipotle because it was a brand with “huge customer demand.”

But it had “very analog” systems that included taking orders by fax.

Before jumping into delivery, he said the company spent a few years building the infrastructure needed for success — including adding back-of-the-house software to manage orders and installing second make lines dedicated to off-premise orders.

Those second make lines are now being enhanced with digital screens that light-up to show only the ingredients needed to make an incoming order. The ingredients on display are listed in the same order as the corresponding food bins, which increases speed and accuracy.

“They [employees] don’t even need to read text,” said Garner, adding that the position has become a coveted spot for employees.

The tech-enabled second make lines are in about 1,200 restaurants. A complete roll out is expected by the end of the year.

“We are fanatical about the experience to the point where — before we had a modern digital app, before we had integrated delivery and before we had rewards — we went to the time and effort to build dedicated kitchens to make these out-of-store orders,” Garner said.

His other big project was revealed earlier this month with the launch of the company’s new rewards program. After testing it for six months in three U.S. markets, the company took customer feedback to heart by delivering a points-based system that would work digitally at the counter, online or on the app. No plastic. No entering phone numbers.

Testing of the program revealed a pleasant recurring theme from fans. “We are not in this for a transaction. Connect with me along the way. I want to hear from you,” Garner said of the feedback.

And, that’s the beauty of being “cool” again. Brandt said fans don’t just buy from lifestyle brands like Chipotle. They “buy into” them.

“This is the best brand I’ve ever worked on,” he said. “This brand is incredible, and I think we’re just getting started.”