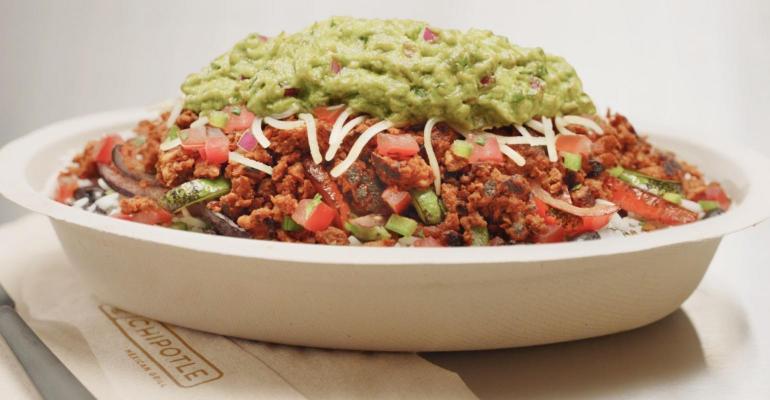 Chipotle
Menu price hikes at Chipotle are expected to reach 20% over 2020 levels by the end of the year.
News>Fast Casual

Could the chain be the ‘value leader’ in fast-casual Mexican?

A report from Wall Street analyst Peter Saleh of BTIG on Thursday surveyed Chipotle’s pricing in 25 cities compared with peers. Saleh found that, in fact, Chipotle remains the “value leader,” despite double-digit price hikes. By the end of 2022, Saleh expects Chipotle’s prices on average to be about 20% higher than they were at the end of 2020, including pricing that was up 8.5% in 2021 and 10.5% in the first quarter this year.

“While this level of pricing is about 4X to 5X higher than normal, we believe that Chipotle remains the value leader in the fast casual Mexican category, as many of its peers have raised prices at a similar or more elevated rate,” the report said.

According to the survey, Chipotle’s prices were 10.7% cheaper than Qdoba; 9.2% less expensive than Moe's Southwest Grill; and about 5% less than Baja Fresh.

Focusing on chicken entrees specifically, which represent about 60% of Chipotle’s sales mix, Qdoba and Moe’s have raised prices on those dishes about 21.5% and 28.1%, respectively, since 2018, compared with a 19% price hike on chicken dishes at Chipotle.

“We expect Chipotle to continue to raise menu prices, but at a more moderate pace than many of its peers, maintaining its value proposition,” Saleh wrote.

With inflation hitting 9.1% in June — the highest level since November 1981 — menu pricing has been a primary concern, with restaurants keeping a close eye out for consumer pushback and moves by competitors.

While inflation has continued to drive prices higher for food at home, which increased 12.2% for the year ending in June, food away from home also ticked up 0.9% during June for an increase of 7.7% over the 12 month period.

The BTIG survey also looked at price increases among other emerging fast-casual chains, including Chopt, Sweetgreen and Dig Inn. Again, the survey found Chipotle prices to be cheaper or comparable in the markets where they compete.

Chopt’s prices were about 13.5% above Chipotle’s, the survey found, while Dig Inn was essentially in line with Chipotle. Saleh, however, noted that Sweetgreen and Dig Inn are historically about 12% to 13% more expensive than Chipotle, so the value gap has narrowed somewhat.

The analyst also believes Chipotle is relatively less expensive than Shake Shack — though the report also contends Shake Shack is behind on menu pricing and is likely to hike prices more aggressively in coming months.

BTIG also notes that Chipotle’s traffic remains positive, though traffic trends have slowed over the past year as prices have climbed.

Chipotle’s first-quarter same-store sales were up 9% and restaurant-level margins were 20.7%. CEO Brian Niccol in April said he expected margins to remain “bumpy,” due to inflation, but reiterated the chain’s pricing power, projecting margins would reach 25% in the second quarter with the price hikes planned. The company is scheduled to report results on July 26.

The BTIG report noted that many of Chipotle’s competitors have closed stores or exited markets since 2018, while the 3,000-unit Chipotle continues to expand, pushing to reach 7,000 locations across North America with a variety of formats.

“We believe Chipotle remains in the middle stages of its sales and unit economic turnaround, with considerable momentum on initiatives like menu innovation, expanding digital sales and stronger marketing,” Saleh wrote. “The strength of these initiatives (prior to COVID-19) has driven improvement in comparable sales and restaurant margin that we expect to continue as these metrics progress toward their historic levels.”