Although onsite locations were a cause of its financial woes, the chain is moving ahead with that strategy

Garbanzo Mediterranean Fresh, right on the heels of filing for Chapter 11 Bankruptcy protection, is opening a new unit at Denver International airport on Monday.

The new location is licensed to the travel division of onsite operator Delaware North and will feature Garbanzo’s latest design, which includes both sleek white-and-black subway tiles and warmer wood tones at its under-the-knee wall and other areas as well as on the new digital menu board which “helps soften it and bring that welcoming, inviting Mediterranean feel … that comes from a Tuscan kitchen or Greek café,” said Devin Handler vice president of marketing for the chain, which is based in the Denver suburb of Centennial, Colo.

That new menu board also has pictures of the food, “so folks who are new to the concept can actually point to something and have a standard build made,” Handler said, “rather than be intimidated by words like baba ghanoush or tabbouleh, which are, by the way, unbelievably scary words for someone who doesn’t know what they’re talking about.”

The Denver airport location, at Terminal B, next to Chick-fil-A in a former TCBY space, is also the first Garbanzo unit to offer breakfast, which will include Greek yogurt parfaits with granola and fruit; build-your-own breakfast bowls, plates and pitas with eggs and choices of vegetables, sauces and other proteins; and a line of grab-and-go items called “Frequent Flyers” that include Greek salads and hummus snack packs.

Additionally, the location will be selling premium Intelligentsia single-origin coffee.

In declaring bankruptcy, Garbanzo CEO James Park told the Denver Business Journal that the reason for its financial woes was his strategy to focus on onsite locations such as universities and airports, which were all dramatically affected by the pandemic.

Handler said that when Park became the chain’s CEO in 2015, “part of our development strategy was to expand the brand in terms of more points of access or occasions, and airports were essential to that strategy.”

So they teamed up with Delaware North to open at terminal D at Hartsfield-Jackson Atlanta International Airport, which Handler said was an opportunity to expose Garbanzo to people who weren’t familiar with it. Also, he said, “It was an oasis of sort of healthy options within a sea of not-healthy options in the airport.” 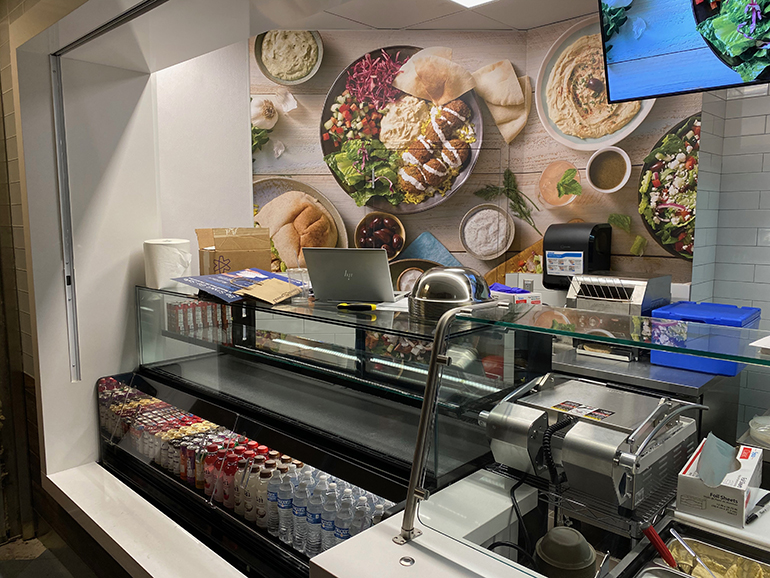 The inside of the new unit at Denver International Airport, officially opening Aug. 24.

It also proved to be lucrative both for Delaware North and Garbanzo, he said.

Since then, the chain has been in the process of franchising many of its corporate locations, reducing the number of company-owned units from 19 to 4.

“It allows us to support the franchisees better, but we were a little upside down in terms of having all of our eggs in one basket,” Handler said. With royalties drying up from onsite locations and income only from the four company restaurants, financial reorganization seemed like the best choice, Handler said.

The Denver airport location was actually slated to open at the beginning of the year but Handler said unrelated construction woes at the airport delayed that by around six weeks, “and in those six weeks, we all know what happened.”

He said Garbanzo would continue to innovate despite its financial woes.

“The best way I think to thrive during this pandemic is to innovate, and come out boldly charging ahead, and hope that the light at the end of the tunnel isn’t a train,” he said.

There are four company-owned Garbanzo restaurants and 22 franchised locations.