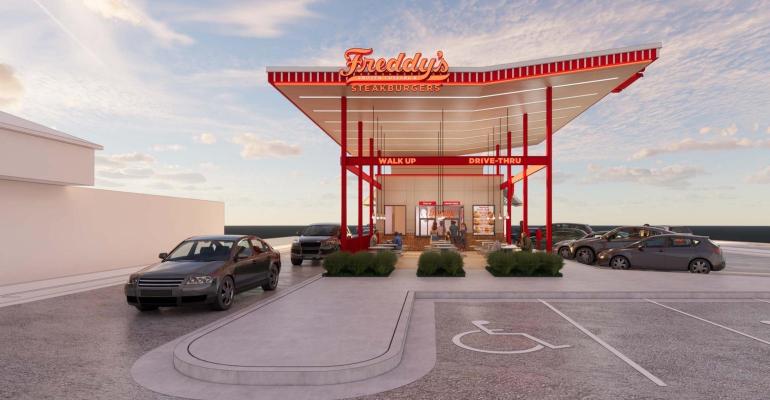 Freddy's Frozen Custard & Steakburgers
Franchise opportunities remain in areas across the U.S., including the Northeast, Upper Midwest, California, Florida, Oregon, and Washington and large metro areas such as Pittsburgh and many of its surrounding markets.
News>Fast Casual

"We strongly believe that non-traditional Freddy's locations at major transportation hubs can help introduce our brand to new guests while still providing our existing customer base with greater access to our menu items as they travel across the country," said Chris Dull, CEO of Freddy's Frozen Custard & Steakburgers. "With travel ramping back up to previous levels, it's exciting to accomplish our goal of opening the first Freddy's airport location. We look forward to serving the millions of people who will travel through Will Rogers World Airport."

The opening of the new restaurant completed a successful year in development for Freddy's, including the rollout of non-traditional locations in the Wichita Wind Surge Minor League Baseball Stadium and at Central Michigan University. Furthermore, the brand finished 2021 with a total of 17 franchise agreements signed to open 102 units over the next several years and is expected to open more than 50 locations throughout the course of 2022.

Operating from 5 a.m. to 7 p.m. each day depending on flight schedules, the new Will Rogers World Airport location is the first Freddy's to offer breakfast to diners. The limited items that have been added to the concept's traditional menu include a Breakfast Steakburger, Breakfast Burrito and Breakfast Bowl among others. This feature will be available in airport locations and also offered to other select non-traditional Freddy's operators.

"We're thrilled to expand our dining program at Will Rogers World Airport with one of our newest brand partners in Freddy's Frozen Custard & Steakburgers," said Gregg Paradies, President and CEO of Paradies Lagardère. "Freddy's excellent reputation and quality program will be a popular and welcomed offering for travelers in Oklahoma City, and we look forward to partnering with this great team on many more opportunities."

Franchise opportunities remain in areas across the U.S., including the Northeast, Upper Midwest, California, Florida, Oregon, and Washington and large metro areas such as Pittsburgh and many of its surrounding markets.

Freddy's Frozen Custard & Steakburgers is a leading fast-casual franchise concept with more than 400 locations across 34 states nationwide. Founded in Wichita, Kansas, in 2002, the brand offers a unique combination of cooked-to-order steakburgers, Vienna® Beef hot dogs, shoestring fries and other savory items along with freshly churned frozen custard treats. Known for operating the Freddy's Way, Guests experience genuine hospitality and food prepared fresh with premium ingredients.  For more on Freddy's, visit the Newsroom and follow us on Facebook, Twitter, and Instagram. For more information about development opportunities, visit https://freddysfranchising.com/.