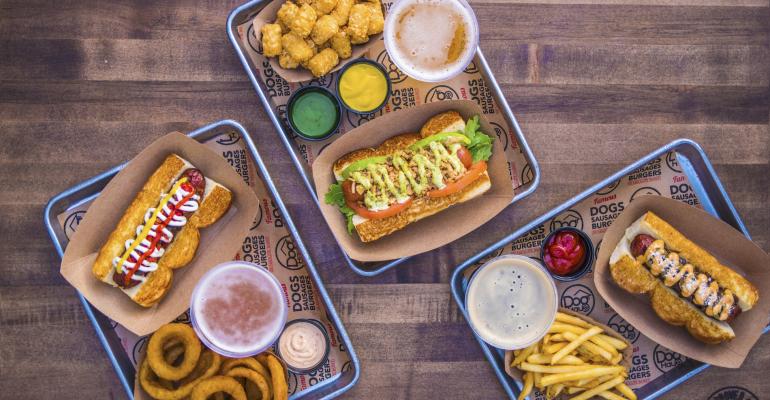 In this week’s installment of Franchisee Spotlight, we’re featuring Andi Ott—a young first-time franchisee who owns a Dog Haus restaurant in the Phoenix, Ariz. area with her husband Damon. We spoke about getting started in the franchising business and how young franchisees can get support from their parent companies.

Store breakdown: One store opened in Nov. 2019 in Gilbert, Ariz. with a second location opening in Spring 2023.

Background of getting into franchising

Related: How younger, diverse franchisees are building a community for everyone

“Like most people, my first job as a teenager was in restaurants at a Golden Corral as a server and I worked my way up into management. Then I got certified by the company and did a sidestep: I got married and had a baby and decided to go into healthcare for a while. I did that for nine years, while my husband has been in the restaurant industry his entire career. […] In 2018, his company sold their franchise and he was either going to start looking for another job or follow his dream of owning his own restaurant. So, we started looking into concepts until we found Dog Haus and we decided to go all-in. […] Over time, I grew into a more involved role and decided to leave my career in healthcare in order to pursue this full time, so I ended up back where I started.”

“We were starting to explore other larger franchises, and we felt like the small fish in the big pond, like we were just kind of another number. […] Here is Arizona, there’s only one Dog Haus, and it’s by Yuma, not Phoenix, so we weren't familiar with it firsthand. We did a discovery day and went to California to meet with the corporate office and eat the food and we fell in love with the brand. There’s a huge focus on quality ingredients, but we also felt like we could really get behind and support the brand. That makes it a lot easier if you're investing in something you really believe in. Plus, it’s newer and is still in that growth phase, so being able to be a part of something while it's still in those development stages has been a really positive experience.”

Running a business as a couple

“My husband and I are the perfect balance of opposites: I love people and customer service: the marketing, administrative tasks, those are my strengths. My husband, with his decades of experience in restaurant operations, he's got it figured out in the kitchen with food costs, and inventory, and preventative maintenance. For the two of us, we tend to divide and conquer. […] It can be difficult to work with your spouse, I would be lying if I said otherwise. But I think each of us having our own lane and recognizing that we kind of have that ultimate veto power or authority within our lane is important. So, we'll consult each other. But if it's something that falls on his side, he ultimately gets to make that decision. If it falls on my side, then I'm the person making that decision.”

Finances of opening a restaurant

“We took out an SBA loan for our first location, and that was a huge learning curve. I remember someone telling me it's like buying a house on steroids, which is probably putting it lightly, I learned how to do a lot of paperwork, projections and all of those things. We had to sign a personal guarantee on our home, and we cashed money out of our retirement funds in order to make that initial investment portion ourselves as well. It’s not easy, but for us, it was one of those times when you're willing to risk it all.”

“Though we're past the pandemic, the ripple effects linger. There are still supply chain issues, and there's obviously been a huge shift in the labor and workforce, and what motivates people. We’re continuing to adapt to those. I don't think we've not gone back to normal; I don't think that there is returning to normal, it's just recognizing that these huge shifted the industry as they shifted the world, so we're no longer looking like, ‘how do we get back to where we were in 2019?’ It's more like, ‘alright, this is where the world is today.’”

What beginners need from parent companies

“We hadn't owned a business before; we've just operated them for other people. Sometimes [the franchisors] have the answers to your questions, sometimes they don't, but they know where to point you. And I think it's having those resources to ask the questions when you're faced with situations you haven’t encountered before that’s really important. Like learning training and marketing and being able to work with people that have more expertise in those specific areas.”

“Being part of a franchise means we have resources above us, there's a person whose entire specialty is in supply chain, their entire specialty is social media marketing. And so having those resources and access to those people, I think is the biggest benefit of a franchise. We did discuss opening a mom-and-pop restaurant, and I'm not sure I'm not sure we ever could have done it. […] we really needed to be part of a franchise and benefit from that structure and support to make sure you’re on the right track.”