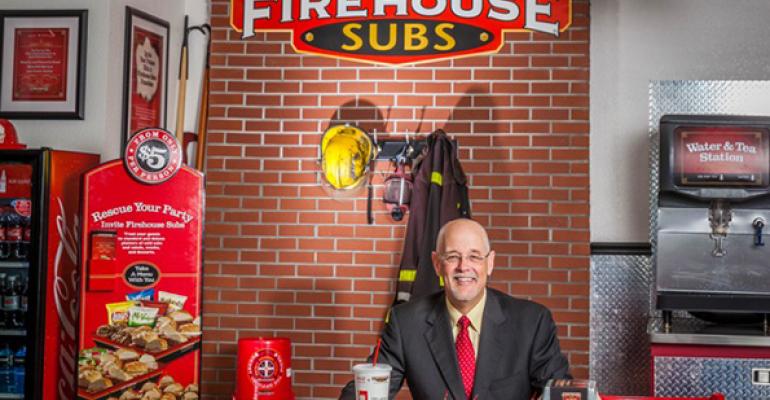 <p>Don Fox, CEO of&nbsp;Firehouse Subs, says the chain is already planning to open its second unit in Canada by the end of the year.</p>
News>Fast Casual

Firehouse Subs’ expansion to Canada, where it first opened in October 2015, also depended on a strong development partner in the new market, Fox said.

Toronto-based Onfire Restaurants Inc. was signed as the area representative, and the company opened its first Firehouse Subs unit in Oshawa, Ontario, northeast of Toronto. Onfire has a development agreement for as many as 90 locations in the province.

Firehouse Subs has 968 fast-casual restaurants in 44 states and Puerto Rico. Parent Firehouse of America LLC is based in Jacksonville, Fla.

Fox discussed the planning that went into the company’s first restaurant outside the U.S. with Nation’s Restaurant News.

What are Firehouse Subs’ plans for the second Canadian restaurant?

Depending on real estate in particular, we hope to be open by the end of the year.

What were your biggest concerns in taking the brand outside the U.S.?

One was the logistics. That’s aggravated right now by the strength of the U.S. dollar. When we started discussions with our eventual area representative in Canada, the conversion rate was closer to 85 cents. It’s gotten as low as the high 60-cent range. That’s quite a difference, so we’ve had to make some adjustments to account for that and make sure the model is protected. That also makes it increasingly important that we develop some scale in the country as quick as we can.

What characteristics were you looking for when selecting your area representative?

We were looking for seasoned operators with experience in the restaurant industry, leaning toward the casual-dining side. That’s important from our perspective. While fast casual is a blend of both casual and fast food, the elements that make fast casual most successful are those things that are gleaned from the casual-dining side — the hospitality and food quality in particular.

At what point did international development become attractive?

Our original long-term plan I put together in 2010 was just focused on domestic development. We did not have an international component to our strategy. The belief was that we had a lot of work to do domestically, and that’s where we were going to keep our attention and resources. But as we got to about the 750-unit, 800-unit mark, and knowing our anticipated build-out for the U.S. market is about 2,500 units, I thought we were at a point in time where we could start looking beyond the U.S. I also had the resources within the company to pursue international development in way that would not detract from our work in the U.S.

You had some experience in Puerto Rico, where you opened in 2011 and have 12 restaurants.

While Puerto Rico is not international in the strict sense of the term, we did have to deal with some of the issues of international development, especially on the logistics side. That success led us to do some more due diligence. We looked at North and South America, and opted to look at both Canada and Mexico.

What has been the highest hurdle so far?

The biggest challenge we have is the relative cost of goods — we are sourcing some SKUs domestically [in Canada], and we want to source more. We’re committed to having the sandwiches taste exactly the same way we would here. The sales volume has been above the U.S. average when converting to U.S. dollars. We’re selling more sandwiches on average per day than in the U.S., and that continues to build.

What is your advice to U.S. chains looking outside the border for expansion?

Really understand the consumer in that international market you may be seeking entry in. Never assume that because of your success here — the strength of your brand — that in any way that will assure you of success in another market, especially when you are dealing with situations where culturally that market may be much different than the U.S.

Do you have any other suggestions?

Don’t get caught up in the glamor and the glitz of going into an international market, especially if you plan to exercise solid controls of your brand. … For our brand, it was just not worth our while to pursue markets where we’d have just three to five units. The other piece: the success rests on the shoulders of the partners you choose. You have to be aligned with the right people. If they don’t share the cultural values of your brand, your chances of success are greatly reduced.

How did you approach the expansion with your corporate staff?

I had to ask the team for a lot of flexibility in time and energy, especially on the supply chain side. I had to encourage them to speak up if the work they were being asked to do was in a way conflicting with their responsibilities domestically. Depending on the feedback, I had to make smart decisions about where to invest in additional infrastructure or outsourcing.

We’re very proud we’ve been able to continue that in Canada. … We’re looking forward to being involved in the communities there exactly the way we are in the U.S., with dedicated dollars going to first responders up in Canada.

Have you found a Canadian version of pickle buckets, which are sold to customers for $2 each and benefit the foundation?

No. We’re using the same pickle supplier, but they [the Canadian operators] are getting the five-gallon pickle buckets they can sell for the charity.

Correction: April 7, 2016  An earlier version of this story misstated the number of states where Firehouse Subs operates. It has units in 44 states.