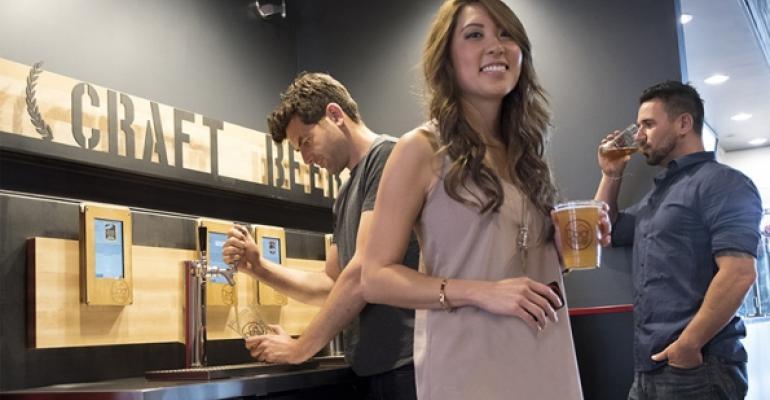 New technology lets customers be their own bartender

Zpizza International Inc. may have cracked the code on boosting alcohol sales in the fast-casual segment by putting bartending in the hands of customers.

The Irvine, Calif.-based chain is one of a growing number of fast-casual concepts experimenting with self-service beer technology. Other concepts on the West Coast include gourmet hot dog purveyors Dog Haus and Brätworks, as well as Blast 825 Pizza.

The model is based on relatively new technology that some contend could be a game changer in attracting craft-beer-loving Millennials.

Many fast-casual chains carry craft beer and wine in bottles and cans, but the limited-service model can inherently hinder alcohol sales beyond one drink. Customers are less likely to get back in line for a second drink, and workers are often too young to handle alcohol, or are not trained to upsell. As a result, few concepts within the segment have put much effort into alcohol sales.

Zpizza, however, has transformed three units into Zpizza “tap rooms,” which feature a beer wall with 10 to 20 taps. Each restaurant offers a unique collection of local craft brews on draft, said Chris Bright, president of Zpizza.

After their IDs are scanned, customers can open a digital tab and pour their own draft, paying by the fluid ounce. That allows them to taste an ounce or two of different options before they settle on a “long pour.” If they want a second drink, they can get it themselves without having to wait for a server or table runner.

Some traditional Zpizza units offer beer and wine in cans and bottles, as is relatively common in fast casual. But those units typically see only about 2 percent of sales from alcohol, Bright said.

“It’s very difficult to generate liquor sales in a fast-casual environment because consumers are reluctant get in line again to order a second glass of wine or beer,” Bright said.

The self-service format eliminates that obstacle, he said.

At tap room locations with the beer wall, alcohol sales have reached as high as 20 percent, Bright said. “It’s a big winner in that sense.”

The 95-unit Zpizza has three tap room locations and six more in development. “It’s our growth platform,” Bright said. “Going forward, our focus will be on building tap rooms only.”

The tap room concept has given the brand a jolt of growth at a time when build-your-own pizza concepts with flash-baking ovens are stealing the fast-casual limelight, Bright said.

Zpizza has long offered healthful pizzas, pastas, salads and sandwiches with all-natural and preservative-free meats, organic tomato sauce and mozzarella made with milk from grass-fed cows. Customers order at the counter, but the chain uses deck ovens that cook pizzas in about eight minutes, slower than the new build-your-own-pizza upstarts.

But now the extra time is beneficial, as it gives Zpizza customers a chance to explore the beer wall. In some locations, wine on tap will also be an option.

Zpizza uses the iPourIt system, but there are a growing number of self-service beer options for restaurant operators.

At a recent National Restaurant Association conference on technology, Josh Halpern, vice president of national retail sales, on-premise and military, for Anheuser-Busch in the U.S. said his company is going after the fast-casual segment in a “big way” with self-service equipment.

Anheuser-Busch partner DraftServ is working with sports arenas and cruise ship companies around the country to install self-serve taps.

Full-service restaurants are adopting the technology as well, but the trend is particularly ideal for fast casual, where concepts have limited square footage, and consumers embrace the opportunity to control their dining experience, said Joseph McCarthy, co-founder of iPourIt.

With iPourIt, once a customer gets their ID checked, they can open a tab tied to a credit card. Typically, users must preload a certain amount to get started, and they can add to their tab as they go. Customers then receive a wristband or card that uses radio frequency to recognize them at the tap and measure their pour. They can try as many beers as they like, and they only pay for what they pour.

Since the iPourIt system is digital, McCarthy said there is a huge opportunity for collecting data about customers, their age and purchase habits. There is also an opportunity to link with loyalty programs to let users know what’s on tap at their local unit.

Fundamentally, the trend is being driven by the explosion in craft beer, which represented close to $20 billion in beer sales in 2014, McCarthy said.

“There are now over 4,000 craft brewers in the U.S., the highest point ever, and there has been a huge explosion in the products and styles of beer available,” he said.

At Dog Haus, the wide craft beer selection was a perfect match for its gourmet hot dogs, said Quasim Riaz, a partner in the Pasadena, Calif.-based chain.

“Beer goes so well with our food. It’s great that we can take our beer as seriously,” Riaz said.

Two units within the 11-unit chain have the iPourIt system, and franchisees are watching to see how it goes.

The first location with the system opened in Santa Ana, Calif., about six months ago. The second, in Fullerton, Calif., opened in early November, so it’s relatively new, he said.

Traditional locations offer beer and wines in cans or bottles. Some pour draft beer in the back of the house, he said.

But the self-service model offers the potential for improved throughput, with customers pouring their own beer as they would a soda.

The model also has a built-in opportunity for upselling, Riaz said.

As customers try three or four options, those tastes offer incremental sales opportunities that inevitably lead to the selection of a higher-priced product. Customers are more likely to buy a more expensive beer that they know they like rather than taking a risk on an unknown, he said.

“Having a happy customer is something we all strive for in this industry, and if the consumer is able to sample a beer and decide if they want it, they’re happier,” he said.

One consideration: In addition to the investment in the system, which for iPourIt is about $1,200 per tap, operators are required to pay a fee of 1 cent per ounce to iPourIt, which amounts to about 16 cents per 16-ounce beer, cutting into margins.

Tobi Miller, co-founder of the Brätworks build-your-own hot dog chain, said customers like the fact that they don’t have to tip at self-service beer concepts.

Brätworks is opening a unit in Redlands, Calif., with a 12-tap craft beer wall this winter. The original Brätworks opened in San Bernardino, Calif., with beer in bottles and cans, and two more units are in development in Southern California, Miller said.

Miller, who is also a franchise operator of Yogurtland, the self-serve frozen yogurt concept, said he loved the fact that self-service beer allows him to get just the amount he wants, even if it’s just a taste.

The Redlands location will be the brand’s first standalone unit, and a bit larger, at 2,500 square feet. The company is in the process of launching a franchising program, so self-serve beer could become a component that could attract potential operators, Miller said.

The company is scheduled to open a new Blast 825 Tap Room prototype in the coming weeks in San Luis Obispo, Calif., with about 20 taps of craft beer, along with four or five wines on tap.

“We have to evaluate it,” said John Ferdinandi, CEO of Milano Restaurants International. “But we think it will enhance the overall experience for the customer.”

Ferdinandi said the key will be whether the model will work in a setting with faster service, where table turns are vital to unit economics.

“We have to balance the idea of sitting and enjoying a few beers, maybe while watching a game, with patrons who are in to get a quick pizza,” he said.

One benefit Ferdinandi sees is that the onus of a bad pour is on the customer.

“If you have a server that isn’t pouring correctly or wastes beer, that’s on the owner’s side to absorb,” he said. “But if the customer doesn’t pour it correctly, it’s on them.”

Bright of Zpizza said they give customers who pour incorrectly, with too much foam, an opportunity to top off.

Zpizza’s first tap room location opened in Sacramento, Calif., about a year ago. So far, customers love the interactive nature of the beer wall, he said.

“It’s a very communal environment, where people come together and talk about what they’re tasting,” he said. “That really keeps them coming back to the beer wall, as opposed to the somewhat mundane act of going up to the counter.”

Will self-service beer and wine become as ubiquitous as self-serve soda fountains?

Bright said it depends on the concept.

“I don’t know that fast casual will go to that format in droves. There has to be a culture around craft beer that fits with the concept. It can’t be an afterthought,” he said. “You have to be committed.”