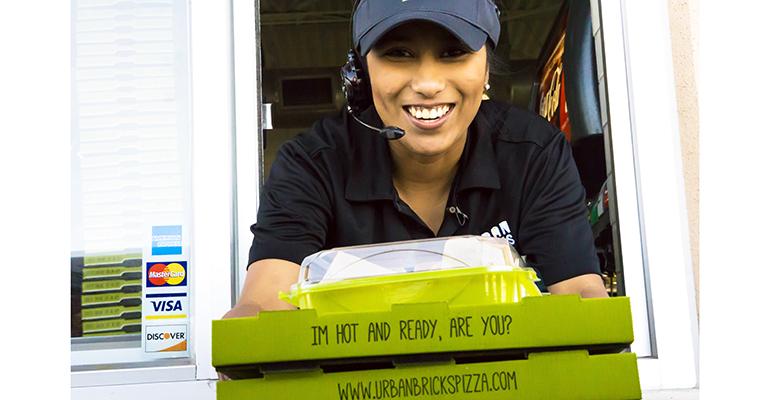 In 2012, Slapfish, a popular food truck in Southern California, opened its first brick-and-mortar fast-casual outlet to adoring fans who didn’t mind waiting up to 20 minutes for made-to-order seafood.

Slapfish’s evolution mirrors a trend among fast-casual brands. The once-high-flying segment was born as an affordable, dressed-down alternative to casual dining. But now these chains, whose growth has sputtered lately, are morphing to compete with traditional quick-service chains on speed and convenience.

“Convenience with the consumer today trumps everything,” said Russ Bendel, CEO of The Habit Restaurants Inc. “The Amazon effect has worked its way into the sector.”

In a fall State of the Industry report by Morningstar/Pitchbook, restaurant analysts said the most successful restaurants will “evolve or die” as they face an increasing number of disruptions tied primarily to consumer demand for convenience over experience.

That’s certainly the case at Noodles & Company which recently installed shelving at its more than 450 restaurants. These “quick pick-up” shelves are addressing a major trend the fast-casual chain is facing: diminishing dine-in visits.

About five years ago, roughly 34 percent of the company’s sales were derived from off-premise orders, including takeout. Today, that number has ballooned to 53 percent, CEO Dave Boennighausen said during the company’s recent third-quarter earnings call.

“Fast casual was predominantly designed for dine in,” Boennighausen told Nation’s Restaurant News during an interview at the company’s headquarters in Broomfield, Colo. 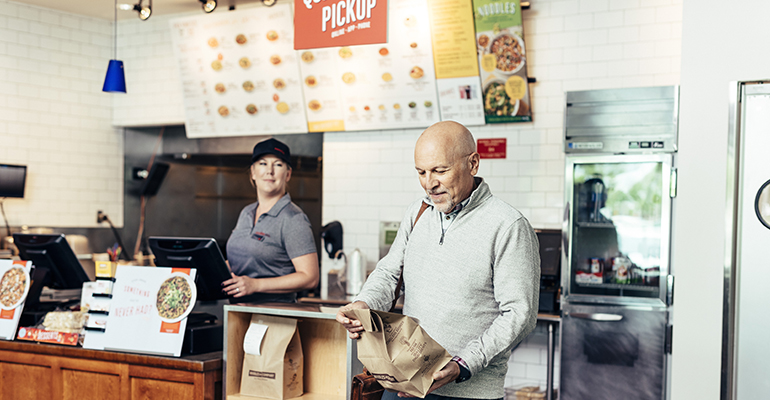 “Fast casual is in a bit of an inflection point in terms of how do we drive convenience to our guest,” Boennighausen said.

Beyond pick-up shelves — which the company said can save walk-in customers up to nine minutes by ordering ahead — Noodles is testing pick-up windows. The exterior window allows customers to pick up food without leaving their cars or paying delivery fees. Tests are ongoing in a handful of stores including two remodeled stores in Wisconsin and Ohio.

“It looks, smells and feels very similar to a drive-thru window except it is for those who order ahead,” Boennighausen said. “The speed is incredibly quick.”

Chipotle is also adding pick up shelves and windows. To date, 350 of the brand’s nearly 2,500 restaurants are outfitted with shelving for takeout orders. The chain expects to complete the rollout of shelving at all restaurants by mid-2019. 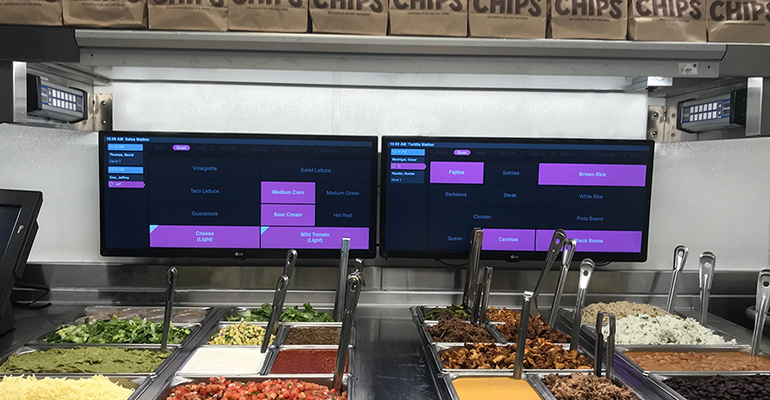 So far, CEO Brian Niccol said he likes what he sees.

“It's clear from these tests that our guests appreciate the added convenience as these restaurants generate digital sales that are far above our national average,” he said during the company’s most recent quarterly earnings call.

With fast-casual pioneer Panera Bread adding dozens of drive-thru lanes around that time, Bendel said he didn’t think it was too far-fetched to give it a try. It was an opportunistic move, rather than a bold new strategy, he added.

“There was this openness in the marketplace that drive-thrus could be associated with brands that really do cook foods to order,” he said. 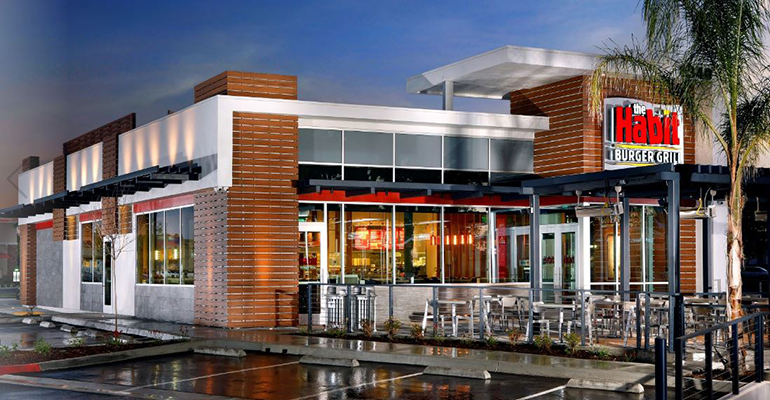 The Habit soon learned that people were willing to wait a little longer for the brand’s famed charburger, which is cooked to order. It was the trade-off for the “convenience of not leaving their car at dinner time,” Bendel said.

The Habit wound up adding one drive-thru restaurant each year for the next three years, focusing on units in its core California market.

As for the Habit, Bendel said drive-thrus are now part of the Irvine, Calif.-based company’s long-term strategy.

Of the 240 Habit locations in the U.S., 26 sport drive-thrus, many of them added in the past two years.

Bendel said 14 of the 30 new restaurants expected to open by the end of 2018 will have drive-thrus. In 2019, The Habit plans to open 21 to 23 company-operated locations. He said 50 percent of them will be drive-thru restaurants, including a unit slated to open in early 2019 in New Jersey.

For years, quick-service has tried to up its game by redesigning restaurants to mirror the contemporary features of fast casual.

That’s blurred the line between the two categories — and confused the consumer.

Besides competing with the rival next door, chains and independents are now up against dozens of other concepts with similar menus miles away from their location.

That confusion was evident when Slapfish opened a Maryland restaurant earlier this year. Lines snaked out the door, which upset impatient guests.

“We don’t understand why you can’t get us food in five minutes,” Gruel said, citing the type of complaints the brand was getting.

Gruel is now outfitting new restaurants with grab-and-go foods and simpler store designs because fewer people are dining in.

The Fountain Valley, Calif.-based company, now with 15 locations, said it has another 150 stores in development. In the coming months, new locations are opening in Orlando, Fla.; San Jose, Calif.; Hilton Head, S.C., Phoenix; and Oklahoma City; as well as in the United Kingdom.

Gruel said adapting those stores is crucial in a fast-changing environment, where convenience is top of mind for consumers.

As fast-casual chains see a dramatic shift in dine-in visits, many are looking at smaller footprints as they grow units.

Fazoli’s restaurants are typically 3,000-square feet. But CEO Carl Howard said that number could decrease sooner than later due to the “stay at home economy.”

“Could I see a day where they are 1,800 square feet with 30 dine-in and mobile kiosks and double drive-thrus? Yes. I could see that.”

“With the rise of digital technologies, increasing demand for off-premises restaurant substitutes, and changing consumer attitudes regarding health/wellness and food sourcing, we believe restaurant layouts will look very different five years from now,” according to the Morningstar/Pitchbook report.

The report added that transactions per square foot was one of the “best benchmarks operators and investors can use to monitor a concept's ability to make necessary changes.” 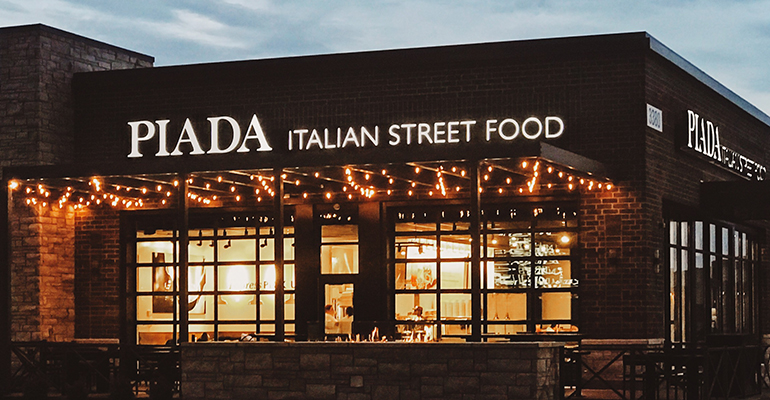 On average, most Piada locations range from 2,400-square feet to  2,500 square feet. Going forward, new restaurants might hover around 2,000 square feet with most of the space coming out of the dining room.

“Our kitchen size would be the same, if not a tad bit bigger,” Eisenacher said.

That reflects another move fast-casual brands are making to enhance speed and convenience: second make lines.

Chipotle’s Niccol said pick-up shelves, and second-make lines have helped to reduce delivery time, which on average is down to under 30 minutes.

“I feel like we’re out of the starting blocks [with] getting throughput to a higher level,” he said during the company’s third quarter earnings call. “This will keep getting better.”

“It’s done in a way that it doesn’t distract our front-of-house guest, and our team members,” he said. 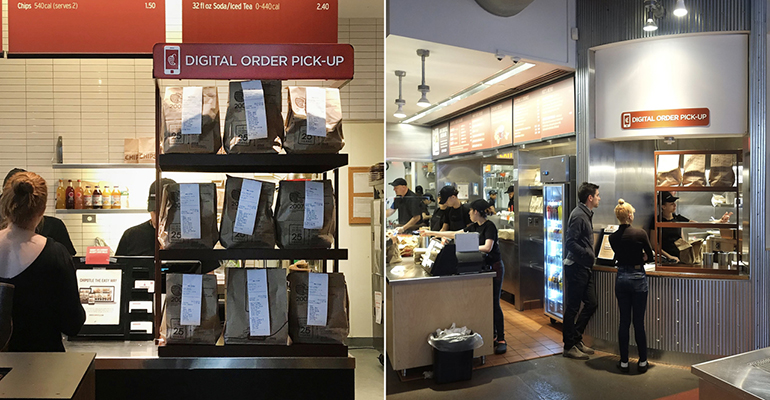 In the case of Sweetgreen, the brand’s latest real estate experiment encourages no store walk-ins.

In the fall, the Culver City, Calif.-based chain launched Outpost, a centralized location for free lunch deliveries. The 15 starter locations are strategically placed inside regional or corporate headquarters, such as Nike’s Culver City office. The chain said these drop-off zones — meals labeled with the customer’s name and placed on a shelving unit — are a new way to drive sales outside its traditional four walls.

“As we see it, Outpost is a new revenue stream for our team and we think it’ll permeate other categories in the food and beverage space,” the company said.

The 89-unit chain currently has Outposts at Vice, Refinery29, Nike, Live Nation, Headspace and MeUndies offices. The brand hopes to add 500 or more by the end of 2019.

Pivoting to compete with quick service was not easy for Piada. The brand prides itself on delivering hospitality and chef-driven food — attributes the company refused to compromise.

“If you would have asked me a year and half ago, I would have said very violently we would were not going to delivery,” Eisenacher said. “You worry about food leaving your four walls.”

But then something happened: Diners were leaving anyway.

When the first Piada opened eight years ago, the brand generated 60 percent of its sales from dine-in orders. The rest was takeout. Today, that mix has flipped. Off-premise sales — including catering, online and delivery — make up 25 percent of sales; takeout is 35 percent.

The numbers were a reality check for Eisenacher.

“Your guests are voting with their dollars,” he said.

Piada, whose cooks wear chef coats, eventually embraced third-party delivery. But the Columbus, Ohio-based chain took several steps, including hacking its POS system, to ensure ordering was frictionless for guests and back of the house staff. After the POS changes, online orders can be set to print at a scheduled time to ensure food is made on time and accurately. It’s also lowered the number of errors on carryout and delivery meals.

In late fall, Piada posted a message on its website, outlining its “next level” carryout experience. It promises diners speed, convenience, accuracy and accessibility.

Eisenacher said he realized the brand’s hospitality ethos doesn’t have to be sacrificed when diners choose to eat at home.

“Just because someone has a busy lifestyle, doesn’t mean we can’t honor that core value — hospitality.”