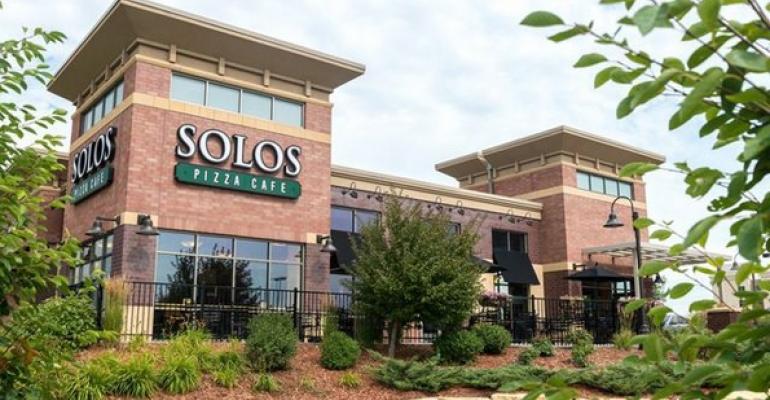 Brian Banick, co-founder and partner of Minneapolis-based Solos Pizza Café, has been a fast-casual pizza pioneer, opening the concept’s first restaurant in February 2007. But while the rest of the industry appears to be catching up in a “gold rush” environment, he and other players in the upstart segment say there is room for multiple winners in the race to define fast-casual pizza.

“When we started, we didn’t really understand the term ‘fast casual,’ and that term and segment have evolved as well,” Banick said. “A big part of everything we do is customer service and research. … We were developing the concept and realized nobody was doing it because the oven technology was difficult to find back then. … It is certainly going to be product quality, consistency and customer service that will really carry us.”

Solos’ eventual franchisees would be expected to grow the brand as well, Banick said. Three-unit Solos recently began offering franchise opportunities and is vetting interested operators from the Midwest and markets as far away as Florida and Arizona.

The rest of the new segment includes young chains with aggressive, franchise-driven growth targets, including Pie Five Pizza, Uncle Maddio’s Pizza Joint, Top That!, and Your Pie. Other entrants have major restaurant companies as high-profile backers, including Denver’s Live Basil Pizza and Los Angeles-based PizzaRev, which received a minority-ownership investment in March from Buffalo Wild Wings.

The chicken wing specialist recently said it would open its first PizzaRev locations next year in the Minneapolis market it shares with Solos.

“We have the opportunity to open [PizzaRev] locations in Minneapolis, partly as a test of the concept and partly because this is our home territory, so it’s a great opportunity for us to take a look at how it functions and the upside potential to it,” chief executive Sally Smith said during Buffalo Wild Wings’ second-quarter earnings call. “We’d like to have something open, if possible, probably the first quarter of 2014.”

The next hot concept

Banick and his partner Bruce Thomson project two to five franchise openings in 2013 and between 10 and 15 units in 2014.

“We’ve only been advertising the franchise program for a few weeks, but the response has been fantastic,” Banick said. “Ideally, the first couple would open in Minneapolis, so we can make sure they’re off to great starts and can be successful and profitable. … With the right franchisees we can expand beyond the Midwest.”

“Made-to-order pizza can be the next big growth niche because its fresh, gourmet positioning provides a strong platform for popular health and wellness concepts,” executive vice president Darren Tristano said in a statement. “The ‘better’ trend seen in ‘better burgers’ will also drive ‘better sandwich’ and ‘better pizza’ concepts. Not only are made-to-order pizza concepts delivering better quality and fresher ingredients, consumers are able to create their own pizzas that are ready within minutes, a proven recipe for success within the fast-casual space.”

Tom Ryan, managing partner and chief concept officer of Denver-based Consumer Capital Partners and founder of Live Basil Pizza, said the nascent fast-casual pizza category has enough room for several brands to grow, and that “it’s not going to be a monopoly.”

“These brands are combining Americans’ second-favorite food with the fast-casual mode of dining,” Ryan said. “There’s room for a handful of them over time to take on a national presence. The ones who’ve read the market the right way and anticipate where it’s going will be the lasting brands. It’s not that different from how burgers looked in 2007.”

Ryan, who also founded the Smashburger better-burger concept, sees the large legacy pizza chains as his competition, not necessarily other fast-casual upstarts like Solos, PizzaRev or Pie Five.

“This is such a huge category, and the target is not to beat each other so much as it’s to change the pizza category,” he said. “Our goal isn’t to be a fast-pizza company; we’re a fresh-pizza company. We want to serve a pizza you feel good about, with freshness cues everywhere. We like to grow fast because we like to grow fast.”

Ryan added that competition from other fast-pizza chains or the national brands like Pizza Hut and Domino’s would not inhibit Live Basil’s growth, as long as the concept remains focused on its operations and profitability.

“There is a proliferation of concepts with differing degrees of attributes,” he said. “Some are more focused on speed, some traditional styles of pizza made in front of you. … At the end of the day, our mantra is to serve pizza you feel good about eating. The designed-in differentiators in Live Basil let us stand on our own. … To do that, you have to be distinct, good and make money in the model.”

At Solos, customer service is a key priority for differentiation, Banick said. However, the menu also has differences from what other fast-casual pizza startups offer. The crust is a blend between hand-tossed pizza and a Neapolitan style that is sturdier than traditional Neapolitan offerings. Banick added that Solos evolves its menu regularly based on customer feedback, which led to the So Lo Calorie menu of pizzas with 500 calories or less and limited-time offers like the Cuban Pizza.

A new marketing campaign broke in mid-July with billboards and radio and print ads that emphasize the brand’s tagline, “Every one is an individual” — which refers to both individual customers and their personalized pizzas.

Having tested and developed Solos’ marketing and operations systems so thoroughly has helped the chain get off to a good start in the race to build out the segment, Banick said, possibly more than its advantage of starting six years ago.

“While there is urgency to expand, we were in that process long before these other players got into the game,” he said.