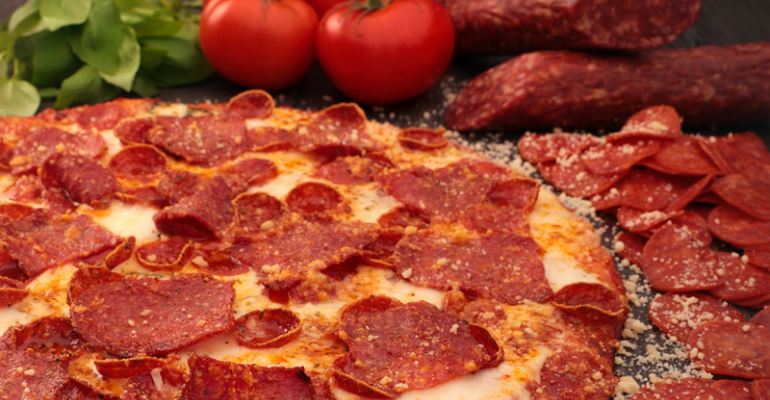 800 Degrees
The brand is known for its wood-fired Neapolitan pizzas, but two new thinner crusts will be available for delivery and through the Piestro machines.
News>Fast Casual

In addition to growing its restaurant base, 800 Degrees this week announced plans to add 500 delivery locations globally over the next five years using the rapidly growing REEF ghost kitchen network, which boasts about 5,000 locations.

And the brand plans to be the first to launch the new Piestro machines — robotic pizza-making kiosks — to bring 800 Degrees’ customizable pizzas to more locations, like office buildings or college campuses.

Founded in 2011, 800 Degrees was one of the hot fast-casual pizza brands to emerge from Los Angeles. Initially, it was positioned as a more premium brand known for its wood-fired Neapolitan-style pizza.

That wave of fast-casual pizza at the time was designed to be an alternative to delivered pizzas. These were fast-baked pies that were meant to be served immediately, not packed into a box for delivery.

But, even pre-pandemic, Lee said it was clear the consumer wanted pizzas delivered or to-go.

Key to new the strategy is the development by co-founder and chef Anthony Carron of two new pizza styles: one with a thin, cracker-like crust and a classic American-style option, which are designed to be “more deliverable,” Lee said. The new variations will have the same premium toppings.

The REEF locations will use a variation of the smaller, more efficient pizza ovens used in the Piestro machines, said Lee. The automated portable pizzerias were designed by former Kitchen United co-founder Massimo Noja De Marco and make customizable pizzas from fresh ingredients selected by the user.

The convection-style ovens are designed for smaller spaces with a low ambient temperature — many REEF locations are out of shipping containers or trailers in parking garages— and the delivery and to-go pizzas will be offered in 10-inch (a personal pizza) and 14-inch sizes (to share).

At the restaurants, the Neapolitan pizzas are 12-inch. The brick-and-mortar units also have a full menu with salads, sandwiches and baked-not-fried wings.

The goal is to give franchise operators new revenue streams to fuel expansion.

Ideally, franchisees or licensees could use a restaurant as a commissary to stock the Piestro locations with fresh ingredients daily, and the REEF outlets could help expand the delivery reach.

800 Degrees has 15 locations in the U.S., Singapore and Japan, though four are still closed by COVID restrictions. Of the six in the U.S., one is company owned — though a second corporate location is coming soon to Los Angeles — and the rest are franchised.

Currently, 800 Degrees has one delivery-only REEF location (in Miami) but Lee said two more are expected to launch next week.

800 Degrees by Piestro locations are expected to debut next year. An alpha prototype will be ready this fall in a warehouse, Lee said, but the beta machine is expected to go streetside next spring, though Lee does not know where the first location will be.