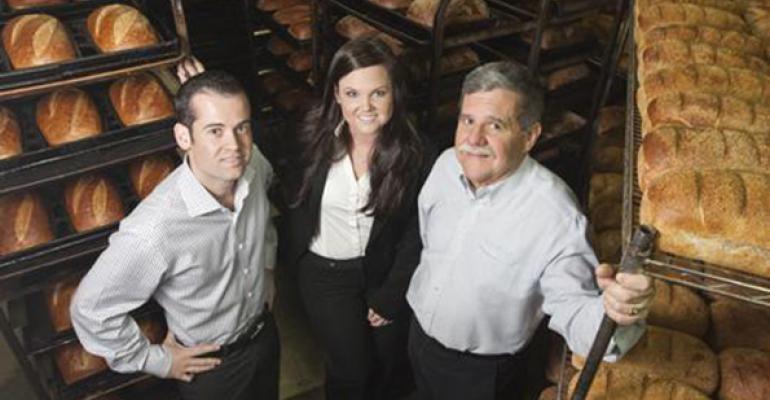 Bakery-café chain is not related to Starbucks-owned brand

Dan Brunello would like to make it very clear that his family’s 17-unit Le Boulanger bakery-café chain in the San Francisco Bay Area is not closing.

Starbucks Corp. said last week that it would close all 23 units of its La Boulange bakery-café brand by the end of September. The names are similar — “la boulange” means “bread baking” in French, while “le boulanger” means “the baker” — but the brands are very different.

La Boulange was founded in 1999 by Pascal Rigo, who is originally from France, and designed the concept as a Parisian pastry shop serving sandwiches, quiches, soups and salads. Le Boulanger, on the other hand, was founded by Dan Brunello, now CEO, and his brother Roger Brunello in 1981 as a San Francisco-style bakery-café concept with a menu built around signature sourdough breads, as well as sandwiches, soups, salads, croissants and muffins.

Next month, the family-owned Le Boulanger plans to launch a new fast-casual concept that will attempt to evolve the bakery café for a next generation — both literally within the Brunello family and for the general demographic.

The new Fire, Oak & Barley Wood-Fired Bistro is scheduled to open in Palo Alto, Calif., in July. The project is led by Dan Brunello’s daughter Kristina Brunello. His son Jeff Brunello will also be involved with both brands.

Both in their early 30s, the Brunello siblings have created a concept with their father that will have a menu that overlaps with Le Boulanger for breakfast and lunch, but seeks to build a stronger dinner business.

The “fine fast” restaurant will feature a wine bar with local bottles, as well as regional craft beers on tap. A wood-fired oven will produce pizzas, pastas and dishes like grilled salmon and hanger steak.

Ingredients will be locally sourced with a focus on healthfulness and sustainability, Dan Brunello said.

Le Boulanger, on the other hand, has an average check of about $10 to $11 at both lunch and dinner.

Dan Brunello said Le Boulanger’s bakery-café positioning held the brand back in building its dinner business. Le Boulanger has the same menu at lunch and dinner, and lunch has always been the stronger daypart.

“We didn’t want to abandon the equity of the brand or the bakery component, but we wanted to refocus on the wood-fired oven,” he said.

The oven opened up the concept to more dinner-friendly menu items, and the addition of beer and wine further positioned the brand for a third daypart, Dan Brunello said.

“There was a lot of influence from my kids,” he said. “It incorporates their perspective on the next generation.”

The debut in Palo Alto will serve as a prototype for the Fire, Oak & Barley brand, Dan Brunello said.

If it gets off to a good start, the family is looking to convert existing Le Boulanger locations to the new concept, where it makes sense.

It’s not clear whether Le Boulanger’s wholesale business will benefit from the closure of Starbucks’ La Boulange, which included two manufacturing facilities that are also scheduled to close.

“We’re in information gathering mode on that right now,” Dan Brunello said. “We’ll see how it will potentially affect us.”