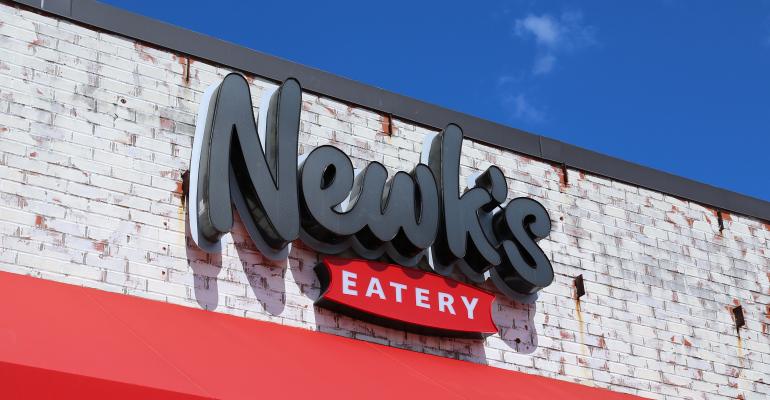 Newk’s Eatery on Tuesday formally unveiled store renovations and updates that the 15-year-old fast-casual brand plans to incorporate in future restaurants and to refresh existing units, executives said this week.

The Jackson, Miss.-based company, which has 125 owned and franchised units in 15 states, completed the store refresh in about 10 nights without closing the restaurant, said Chris Newcomb, co-founder and CEO of the Newk’s.

The remodeled store in Jackson, first opened in 2007, features new surfaces, such as teal tiled walls in the to-go area, marble countertops, wood surfaces on areas dividing seating from the kitchen, new lighting and flooring and a wall that features the brand’s new tagline: “Feed What Matters.”

The new look continues to feature counters that are located within six to eight feet of the entrance and Newk’s signature open kitchen.

“I never, in all my years, liked that front-of-house vs. back-of-house,” Newcomb said. “When you had to schedule them different, that didn’t spell ‘team’ at all. Also, you have to clean as you go. If the guests see you hustling, they are more apt to be forgiving than if there’s a wall where you can’t see anybody.” Also, managers can observe the entire restaurant from one point and resolve potential problems, he said, and guests can interact with the staff.

The only areas hidden from the customers’ view are the dishwasher, storage and a small amount of prep.

While early Newk’s units covered 4,400 to 4,600 square feet, the company last year went through a process that created a restaurant that is 3,400 square feet. “We lost a few seats,” Newcomb said, “but it took a few steps out and it’s going to save on labor, investment and construction.” The first smaller unit will open in Athens, Ga., in about a month, Newcomb said.

Newk’s was founded in 2004 after Newcomb and his father, Don Newcomb, sold the McAlister’s Deli brand, which was opened in 1989. Sentinel Capital Partners acquired Newk’s in 2014 when the brand had 67 units.

Newk's also has a philanthropy arm called Newk's Cares, which it founded in 2014 and raises money to support ovarian cancer research and awareness.