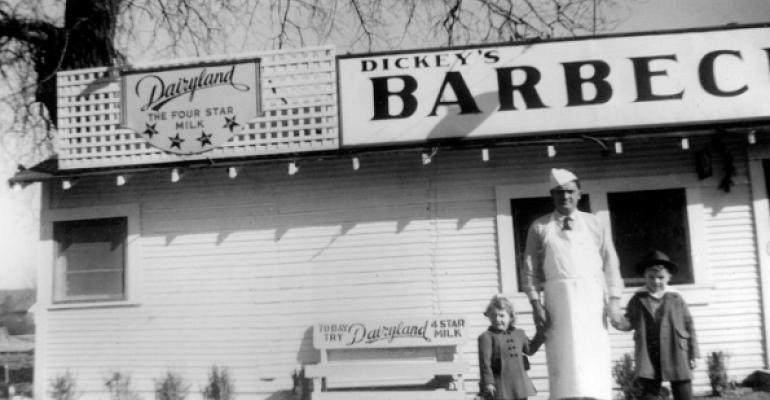 Dickey’s Barbecue Pit is celebrating its 75th anniversary this year, just as heritage and authenticity have become important to restaurant goers. “It’s ironically serendipitous timing for us,” said Laura Rea Dickey, chief information officer for the 563-unit chain, based in Dallas.

“In the past five to certainly less than 10 years, it seems that our guests have a renewed interest and appreciation for authenticity, and what’s organically us has been valued by more of our customers,” she added.

RELATED:
An NRN anniversary, an industry celebration
Restaurants through the years
11 events that built franchising over the last 50 years
More anniversary coverage

So Dickey’s has spent the past year reminding guests of their heritage, and using modern technology to do so. Using social media and the chain’s loyalty program, the Big Yellow Cup Club, Dickey’s has been asking customers to share their favorite memories from the chain and its signature barbecue, hickory smoked onsite overnight every day, or pictures of where their big yellow cup has been. The reusable 32-ounce cup has been a free takeaway for guests for decades, but for the anniversary they’ve redesigned it. For this year it’s a black cup with chalkboard-style artwork and anniversary messaging on it.

Dickey’s is also celebrating the year with a promotional value meal: a pulled pork sandwich, coleslaw and the limited-edition cup for $7.50.

It’s ending the year with a competition to design murals to go on the back two sides of the original Dickey’s location, which has been in operation since 1941. Contestants can submit mural designs through mid-November. A winner will be picked in December and two murals will then be painted onto the building.