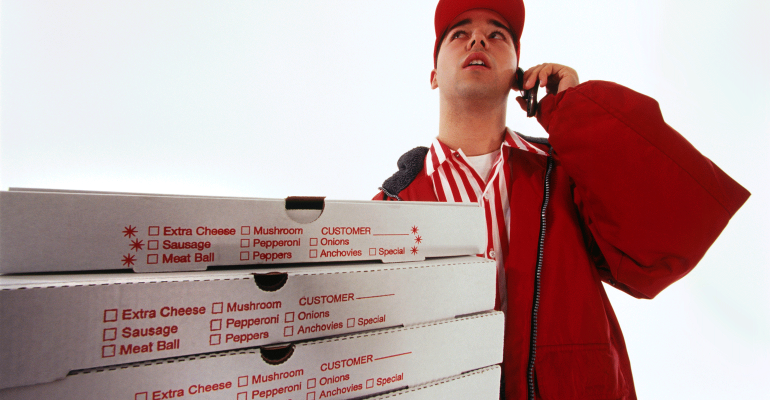 Is delivery worth the headache?

Blog: Operators say delivery generates a flood of sales, but views vary on whether they’re worth it

No single trend in the restaurant industry is as big as delivery. The wave of third-party services and clear demand from consumers has just about every major restaurant chain headed in that direction.

Delivery can generate a flood of sales when companies start implementing the service, according to a panel of operators at the NRA Show on Saturday.

“The sales volume is extraordinary on the third-party delivery side,” said Monique Yeager, chief marketing officer of Tijuana Flats, which began working with UberEats five months ago. "The first three months was absolutely amazing.”

“The cost is what we all need to work together as a community of restaurants,” she said. “The cost of this is extraordinary. And sales volume doesn’t cover it.”

Others, however, say the pickup in sales is worth the cost.

Uncle Maddio’s Pizza has one location that generates 50 percent of sales through delivery. COO Scott Goodrich was blunt about the impact delivery had on that one location.

Goodrich said that third-party delivery is at 20 percent at most of the locations with the service, but not all of his chain’s restaurants has delivery because the company doesn’t trust the service.

Delivery is an important consideration for the vast majority of restaurant chains for a simple reason: More consumers are staying home. And for many of them, the only way to get them to eat your product is to bring it directly to them.

According to the NPD Group, 61 percent of all restaurant visits are for takeout, a number that is increasing, even at casual dining chains built on dine-in business.

Consumers are increasingly shopping online, rather than at retail stores, which has devastated that business. It’s also playing a role in the decline in restaurant visits in recent years, and especially over the past 12 months.

That makes delivery a defense mechanism for operators as much as anything else.

“I do think customers are dictating this,” Goodrich added. “We don’t have a choice. They’re going to want to use it that way.”

Yeager called it a “cultural shift to more convenience.”

But that doesn’t mean delivery is a panacea. Because services charge delivery fees, it costs money. And, for many concepts, the amount of potential business remains uncertain.

Yet operators on the panel all agreed that the services generate a surge in sales at first. The big question many have is whether the sales for delivery are not replacing ordinary takeout.

The other challenge for operators is to make the business profitable. Some operators said they have to hire additional workers to prepare the food and handle the orders, especially at first when a lot more customers order delivery.

Ultimately, operators said they adjust their operations to make the business more profitable.

Delivery orders were as high as 60 percent of the business at some locations after Blazing Onion Burger Co. started third-party delivery, said CEO David Jones.

“We don’t have the staff for that,” he said.

That also frustrated workers who were suddenly much busier than they used to be, driving turnover higher. But the orders eased and the company has adjusted its labor accordingly and added training, and now “the bottom line is where it wants to be,” Jones said.

Another question is whether the orders affect overall business. Some chains worry that it will.

The fast-casual pizza chain Fired Pie will turn off delivery at some of its busy locations during lunch, to not drive away customers who come to the store to order its pizzas.

“We turn it off quite often,” said Fred Morgan, the chain’s co-founder. “We don’t have the luxury of a second kitchen when there’s a line out the door to make orders with five, 10, 15 pizzas. It makes it very difficult.”