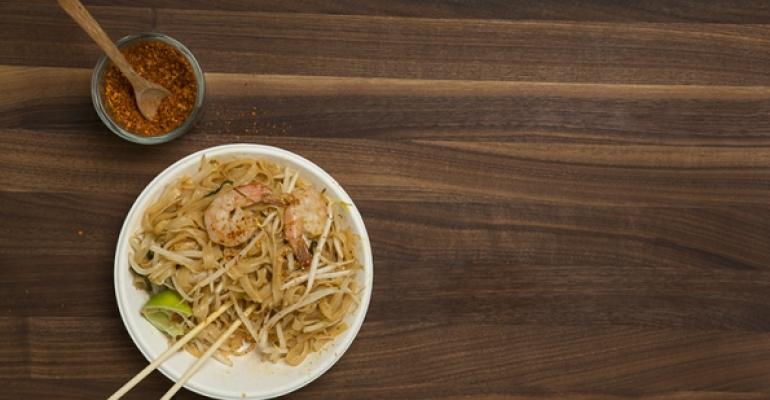 Fast-casual chain seeks to make the cuisine an everyday experience

There’s a lot to be said for local, seasonal produce, but if you’re trying to recreate dishes from your tropical childhood home on the other side of the planet, local ginger and basil don’t cut it.

That’s what Thai entrepreneur Mallika Sukjaro learned when she moved from Bangkok to New York City in 2003. She found that the food in the city’s many Thai restaurants didn’t measure up to what she could get at any street stall in her hometown.

“But you only can work with ingredients you have access to,” Sukjaro said.

But then, when she was working on a consulting project for food manufacturers looking to preserve seasonal Thai fruit so it could be used year-round, she found factories that were flash-freezing the fruit along with other foods, preserving the flavors from Thai sunshine and soil for use later on.

She decided to set up the same process for Thai sauces, and in 2011 opened Dee Daa.

A play on a Thai phrase for “joyful” or “stimulating,” Dee Daa features Thai curries, noodles, stir-fried dishes and other items that Sukjaro missed from home, in a fast-casual setting.

“I want to make Thai food an option that people would think of not just when going to a sit-down restaurant, but something you can get any time,” she said.

But she also wants the food to actually be Thai, so her service style isn’t the infinitely customizable format that is the hallmark of many fast-casual restaurants.

“I wanted to really bring the love of my home country here,” she said. “I wanted to keep the flavor original, yet approachable.”

So the menu has three noodle dishes, three curries, three types of flavored rice — an American innovation — and three stir-fried dishes with choice of protein. Side dishes include spring rolls, a toned down version of the classic spicy papaya salad, several Thai soups and what she calls “Thai topper,” which is the choice of either a deep-fried Thai-style omelet with scallions or a fried egg. Both are classic additions to Thai stir-fried dishes.

Sukjaro said she uses local produce and proteins from mainline distributors. But the sauces are made by her chef, who is also a food scientist and nutritionist, in the industrial Thai city of Samut Songkhram, about 50 miles from Bangkok.

“It’s as original as you can get,” Sukjaro said. “For example, the kraprao [holy basil] is definitely the kraprao that I would eat in Thailand. The way that I would eat any street food in the markets in Bangkok, that’s the way I want the food to be. Otherwise, why would I do it? There are already plenty of Thai restaurants in the States.”

The sauces are sealed in single-serving bags, flash frozen using liquid nitrogen and shipped by the container-load to the United States.

“It’s expensive if you do it for one restaurant,” Sukjaro said. But she has three, having opened her second location in late 2013 and her third last March.

She said the restaurants serve 300 to 400 people on busy days, with average per-person checks in the $10-$12 range. The average wait time is between seven and 10 minutes.

Sukjaro recently added a condiment bar to her restaurants, featuring a sweet-spicy cucumber sauce popular with satay, as well as her recently introduced roast chicken — a popular item in northeastern Thailand. The bar also has what she labels “Thai salt and pepper” — fish sauce with diced bird chiles in it, popular in all of Thailand — and Sriracha sauce.

A sign on the bar notes that, while Sriracha sauce is named after a coastal Thai city, “Thais aren’t really that into it.”

Sukjaro notes that she herself only uses it with fried oysters and fried omelets.

She said she wants to open more restaurants, but not at the expense of quality.

“One thing I want to make sure is that with every location we stay true to our own beliefs in consistency and quality in food and service,” she said. “Expansion is something that’s definitely on our map, but we have to do it very mindfully so we don’t compromise that.”